Combining history, art, and tradition, the goal of pilgrims and St. James's emblem, the Hostal dos Reis Católicos, in the Plaza do Obradoiro, forms together with the cathedral one of the world’s most remarkable and most visited urban settings. The Hostel, which first saw life as a Royal Hospital in 1499 to house the many pilgrims arriving in Santiago, still invites the traveler to enjoy this universal and fascinating city. Considered the oldest hotel in the world, it is also one of the most luxurious and beautiful. It has four magnificent cloisters, elegant public rooms, spectacular bedrooms, and a luxurious dining room offering Galician style fish and meats and the classic apple filloa pies and crème Brulee.

The Parador is in the old part of Santiago's city, on Plaza do Obradoiro, which also houses some of the city's most famous monuments: the Cathedral, the City Hall, and the Colegio de San Xerome. From A Coruña, we reach Santiago by the N-550, via Ordes, or following the A-9, towards Pontevedra. (65 km.).Both roads lead to Noia, 34 km. from Santiago, Padrón, 22 km. and Pontevedra, 59 km.

The Parador has 105 twin bedded rooms, 15 double-bedded rooms, 12 single rooms, and 6 suites. Guestrooms feature telephone, satellite television, TV canal plus, mini bar, heating, air-conditioned living rooms, and more. In the Hostel, there are two different dining areas: the restaurant Dos Reis, select and sedate, and the restaurant Enxebre, with a more informal ambiance, offering traditional Galician cooking. Seafood and fish recently caught in the Atlantic, local meat and cheeses are some of the first quality products on offer, without neglecting the wines and liquors. The Parador also features a bar, Bureau de Change, wireless internet, a parking garage, and a conference suite.

One of the most luxurious and beautiful hotels in the Paradores chain is located in Santiago de Compostela. In this city, the destination of millions of pilgrims, rays of sunlight illuminates the building façades in summer. The rain creates a magical ambiance that overtakes the cobbled streets in winter. The Parador de Santiago, known as the Hostal dos Reis Católicos, is a blend of history, art, and tradition, the dream of Santiago's pilgrims and emblem. It is located on Obradoiro Square near the cathedral, creating an area of spectacular beauty in one of the world's most visited provincial capitals. A stay at this Parador means a visit to a truly unique and exclusive location.

The hotel was built as a royal hospital in 1499 to accommodate pilgrims traveling to Santiago. Today, it continues to invite visitors to enjoy a city that is as universal as it is fascinating. Inside this Parador Museum, considered the oldest hotel in the world, you will discover four beautiful cloisters, elegant rooms, spectacular guest rooms, and a luxurious dining room that offers fish and meat prepared in the Galician style, along with classic apple filloas (a type of crêpe) and crème brûlée.

Santiago is a magical city of almost indescribable beauty, where you will not only look, but you will also feel. In addition to the cathedral and the spectacular Obradoiro and Quintana squares, other sights include Santa María A Real do Sar Collegiate Church. Together with the cathedral, this is the church that has preserved the largest part of its original Romanesque stonework, and it has an interior with lovely proportions. There is also the Renaissance Colegio de Fonseca (Fonseca School) and the magnificent San Martiño Pinario Monastery. These are just some of the places well worth visiting in the city's fine historic district.

The charm and the hustle and bustle of Abastos Market in the morning; the beautifully maintained Alameda Park, which boasts spectacular views of the old quarter; the church, convent, and park of San Domingos de Bonaval, home to the Pantheon of Illustrious Galicians; and the green spaces around the capital, extending all the way to the sea, just half an hour away, will guide you through this city brimming with history and beauty. It marks the end of the Camino (Way of St. James) and the start of a one-of-a-kind experience. We invite you to enjoy exceptional accommodations, the Parador de Santiago.

Due to traffic restrictions applied to Santiago's historical part, you must write down your vehicle's registration number at the record list you will find at Reception when checking in. Otherwise, you could be fined for unauthorized access to the Plaza del Obradoiro. 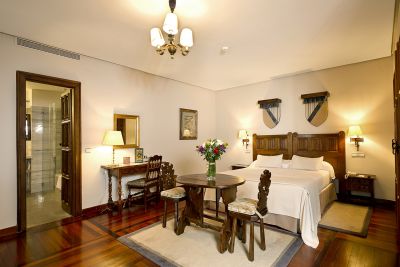 All rooms have a telephone, Satellite television, TV Canal Plus, safe and mini bar. 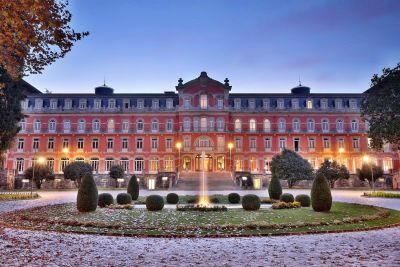 The North of Portugal, located about one hour away from Porto's city, has born a Palace that gained a new life, turning up later into a luxury resort....

EXPLORE THIS HOTEL
From 163 USD 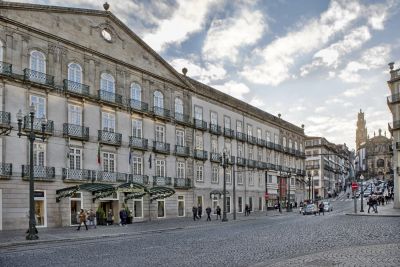 InterContinental Porto - Palacio das Cardosas A Sense of Heritage & Authenticity in the Heart of the City. Located in a newly renovated palace dating...

EXPLORE THIS HOTEL
From 259 USD 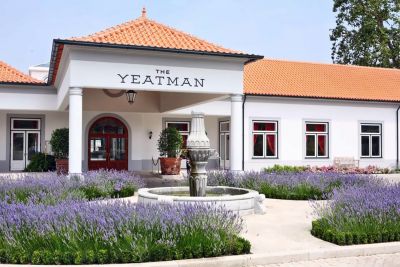 Those seeking insight into Portuguese wines need do little more than visit the cellars of The Yeatman. The 83-room hotel, which holds a prime spot ami...