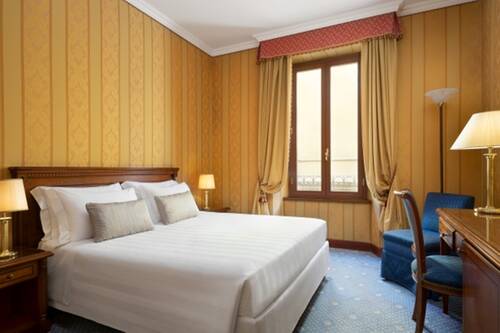 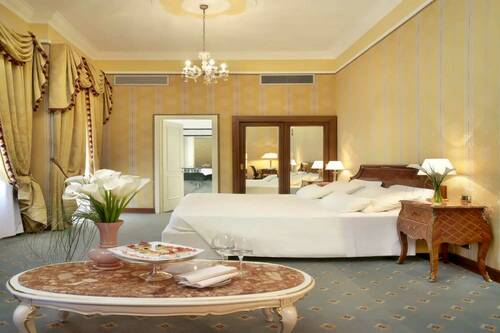 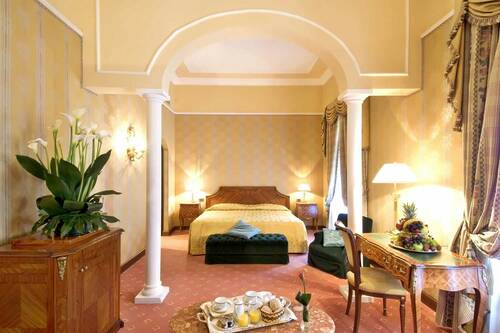 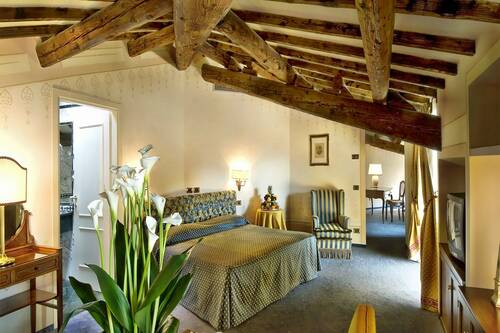 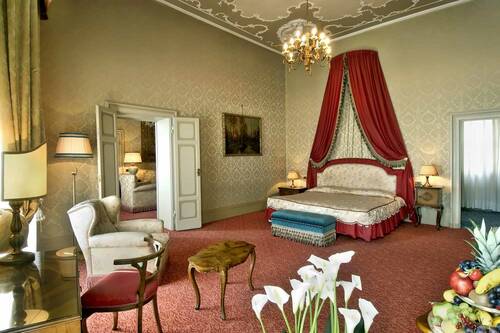 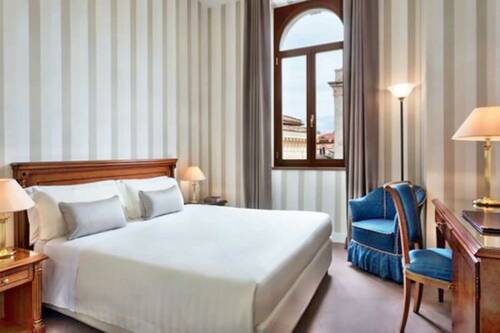 
Since 1884 the Sina Brufani has been the only luxury 5-star hotel to dominate Perugia's ancient town, with its panoramic view of the green Umbrian valley. It is located in the heart of the medieval city, close to the Duomo, Fontana Maggiore, Galleria Nazionale, and Corso Vannucci with its elegant shops. Thus, Sina Brufani is the perfect starting point for a suggestive itinerary to explore Umbria. The secret jewel of the Sina Brufani is its exquisite Spa with a swimming pool built under medieval vaults featuring a charmingly lit and transparent bottom, which enhances the Etruscan ruins of a settlement dating back to 3000 years ago.

Sina Brufani boasts an ancient tradition in luxury hospitality, and since 1884, it is the home of royalty and celebrities from all over the world. The hotel is situated in Perugia, the Umbria region's capital, called "The green heart of Italy" for its lovely countryside. Umbria is also one of the most important Medieval and Etruscan regions in Italy, with extraordinary artistic and monumental patrimony.

Perugia and Sina Brufani are a perfect base to visit the surrounding areas, with some of the most beautiful historical cities, like Assisi, Todi, Spoleto, Gubbio, Spello, and many activities that guests can experience, like wine tasting in the Sagrantino Montefalco wine area, olive-oil tasting, chocolate experience in Baci Perugina factory, cashmere shopping in the world most prestigious brand such as Brunello Cucinelli, truffle hunting in local farmhouses and many others unique experiences.

"Collin's Restaurant'' - Collins' Restaurant is one of the most sought-after dining venues in Perugia. The magical halls full of rich history and charm and the "al fresco" spaces with their modern touches, offer a memorable experience suitable for all occasions. In the enchanting Sala del Cambio or at the modern dehors, the essence of Collins' Restaurant remains faithful to its founding three pillars: quality produce, creativity, and respect for local gastronomical traditions. The menu changes according to each season, guaranteeing maximum respect towards seasonal ingredients and recipes. The best produce is sourced mostly from local farmers, breeders, artisans, and winemakers. Sina Brufani gives priority to those small local producers that care about their land and the local community. Regarding the wine, it's preferred to offer a regional focus on Umbria without forgetting other Regions and Countries.

''Collin's Bar'' - In one of the most evocative "corners" of Perugia's historical city center, the Collins' Bar offers unparalleled views overlooking the Umbrian hills. The Bartenders select the best spirits, which, mixed with their creativity, guarantee exceptional quality cocktails. Aside from the "aperitivo" moment, the Collins' Bar also offers a great location all day long to enjoy a good coffee, a light lunch, or an afternoon tea.

The secret jewel of Sina Brufani is its amazing Spa with a swimming pool built under medieval vaults and featured by charming lit and transparent bottom, enhancing the ruins of an Etruscan settlement dating back to 3000 years ago. A sauna, a Turkish bath, and a relaxing area complete the hotel's services. A small gym is available to customers for their "mise en forme," while the in-room Spa massage services offer guests a relaxing experience without having to leave their room.

The hotel's founder, Giacomo Brufani, was born in Assisi and came from a modest family but developed a real aptitude for tourism from an early age. He began working as a driver for tourists visiting Umbria by stagecoach, looking after and driving the horses, and stepping in as guides during visits to the various cities. As time went by, he decided to set up a fully-fledged "art trail." Later he traveled to Britain, where he gained direct customers by offering them the London-Rome tour, traveling via Paris, Florence, and Perugia. The hotel opened in 1884, gaining immediate success. The leading exponents of high society and nobility of Europe vied to stay in the modern hotel, directed by a nephew of Brufani, George Collins, who came from England for this purpose.

The new century saw tourism to Perugia flourish internationally. The Collins' hotel's subsequent management by Brufani's heirs meant that Britain's contacts were more and more solid. It was not unusual, in fact, to see the Union Jack waving from the balconies of the Hotel on the occasion of British military victories. For many years, the hotel also housed a well-stocked library of English books. In 1986, Sina Brufani joined the Sina Hotels group, which performed renovation and maintenance works on the property, protecting the original characteristics of the Hotel. Over time, the Sina Brufani has maintained its position as a leader in the hospitality of the Umbria region, continuing to be a favorite of celebrities such as the Queen Mother of England, the Prince of Monaco, famous actors, and Heads of State. The enchanting view, the refined atmosphere, and the staff's courtesy of offering a personalized service continue to make any stay at the Sina Brufani a unique and unforgettable one.

Yes. Sina Brufani has rooms that can host 3-4 people and a large choice of connecting and adjoining rooms. The hotel also has a special offer for families.

The hotel is open all year round.

How much is the daily fee for parking for hotel guests?

The cost is 20 EUR per day, per car. Limited free parking spaces are available in front of the hotel.

Are pets allowed in Sina Brufani?

What special experiences can the concierge organize?

Children below 4 years old are free of charge. Children 5 years older will have an adult rate.
Special promotion for families: 50% discount on the second room for children and a special discount on meals.

What is the cost of an extra bed?

The hotel provides extra beds free of charge for children below 4 years old and for children 5 years and older the extra bed cost is 65 EUR per night.

The Deluxe room can accommodate 1 child and 2 children for Junior Suite and Suite. There is no age limit for staying in the same room with parents.

Does the hotel offer a babysitting service?

A babysitting service is available on request. Starting rate is 15 EUR per hour.

The hotel has one restaurant. In the summertime, they have an outdoor restaurant area in front of the hotel. Typical local cuisine.

Yes. The hotel can satisfy all the main dietary needs.

Does the hotel have a vegetarian menu?

There are some vegetarian and vegan proposals on the menu.

How long does it take to get to Rome or Florence by car?

It takes about 2 hours to drive from the hotel.

What are the operating hours of the Spa?

How many saunas and steam baths are there?

Sina Brufani has one sauna room and one steam bath room.

Are children allowed in the spa area?

Children are allowed only in the pool area and only if accompanied by parents.

Coffee-making facilities are available only in Suites and some Junior Suites or on request.

Does the hotel offer a personal fitness trainer?

A personal fitness trainer is available on request.

Does the hotel have charging stations for electric cars?

There are public charging stations in the public parking in front of the hotel. 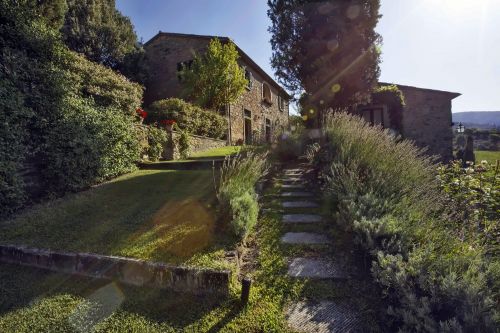 Il Falconiere & Spa is a five-star Relais Chateaux hotel in Italy. The hotel offers magnificent views of the Tuscan countryside. Its facilities includ...

EXPLORE THIS HOTEL
From 275 USD 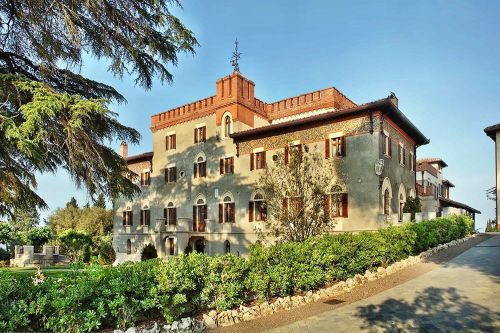 Borgo Dei Conti Resort has what it takes if you are looking for a getaway with pristine surroundings. The residential compound covers 20 hectares. It... 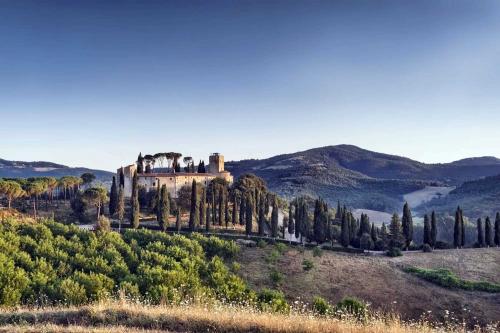 Stay at the Castello Di Reschio. Your opportunity to be in a magnificent house, where design, style and comfort are second to none. A thousand-year-ol...