The split-level design integrates a generous living area and a bedroom with a clean style of decoration and a delicious double bed fitted with 300-thr...

The Arvoredo category bungalows have been renovated recently and now they all have their own pools in green hijau sukabumi stone just outside. They ha...

This is an exclusive and modern space that is fully integrated and very functional, providing guests with every comfort and convenience in their own b...

This bungalow has been built to integrate the bedroom and living-room into a single modern and exclusive space. The clean decoration is light and soph...

The bedroom and living room are an open-plan design and the bungalow boasts a sauna with a view of the sea and a spa bathroom and a whirlpool bath tha...

The Especial Esmeralda is the most exclusive bungalow in the resort and it offers guests an incredible experience without ever having to leave the bun...

Ponta dos Ganchos Resort, inaugurated in 2001, is one of Brazil's newest and most luxurious resorts. Situated on a small point nestling between two charming fishing villages and surrounded on 3 sides by the sea of the Emerald Coast, Ponta dos Ganchos Resort offers the warmth and personalized service of a guest house together with the sophisticated infrastructure of a 5-star hotel.

Above all, Ponta dos Ganchos is exclusive; there are only 25 comfortable and spacious "bungalows" in an area of over 80,000 m2. With over 3 staff per bungalow, the hotel aims to offer a service customized for each guest. Brazilian hardwood and natural stone characterize the 25 bungalows designed by their award-winning architect. The rustic style is complemented by modern conveniences, including air conditioning and more. Six bungalows are offered: Anhatomirim, Arvoredo, Da Vila, Especial da Vila, Esmeralda, and Especial Esmeralda spectacular sea view.

Ponta dos Ganchos possesses an extensive infrastructure, including an indoor heated swimming pool, tennis court, games room, snooker room, fitness center, cinema, restaurant, bars, and a business center. Electric cars (silent and non-polluting) are available for internal transport. All efforts have been made to preserve the natural beauty of the area. There is only 5000m2 of construction in a total of 80,000 m2, environmentally friendly waste treatment is employed, and a reforestation program is underway. At the heart of the Resort, the Beach Restaurant provides drinks, lunch, and dinner at any hour - the doors only shut when the last guest leaves. A diversified and sophisticated menu is on offer, emphasizing local dishes of Santa Catarina, in particular freshly caught fish, prawns, oysters, and mussels.

Various available activities, including canoe, Stand up Paddle, boat trips, diving lessons, ecological trails, running track, and massage. The highlights, of course, are nautical. With the Arvoredo Biological Marine Reserve islands less than one hour away, they have one of the best diving options available on the Brazilian coast. In addition, the Island of Anhatomirim houses one of the oldest forts in Brazil.

Ponta dos Ganchos is situated in Governador Celso Ramos, Santa Catarina, in the south of Brazil. Colonized by Azoreans, Germans, and Italians, Santa Catarina is very different from the stereotypical Brazil of coffee, samba, and carnival. Currently, little known outside of Brazil, the coast of Santa Catarina is considered one of the most beautiful in Brazil and is the most popular holiday destination for Brazilians and Argentineans. Santa Catarina enjoys a subtropical climate with an average temperature of 27oC during the summer months (December to March) and 21oC during spring and autumn. Governador Celso Ramos is a region immersed in history and tradition, dotted with fishing villages and sparsely populated with descendants of the original Azorean settlers. It is a slice of old Brazil, emphasizing traditional occupations such as lace making, livestock, fishing, and mussel farming. To maintain a climate of total tranquility, the hotel does not accept children below 18 years.

Ponta dos Ganchos is open all year round. Ponta dos Ganchos Exclusive Resort is a benchmark in luxury hospitality in Brazil and stands out for excellence in services and sophistication in details.

What is the closest airport to the hotel?

How much is the daily fee for parking for hotel guests?

There is no fee for guests using the parking at the hotel.

What special experiences can the concierge organize, during a guest's stay?

There are 2 restaurants at the hotel, and the Room service is also available. Ponta dos Ganchos cuisine is recognized for its classic recipes combined with contemporary techniques and the search for the best of the Brazilian regional flavors.

Does the hotel have a gourmet restaurant?

Yes, the main restaurant is focused on high-end cuisine.

Yes, the hotel can accommodate most dietary needs and should be informed in advance.

What are the opening times of the Bars?

Is the beach directly accessible from the hotel?

Is your beach private or public?

Ponta dos Ganchos beach is very exclusive, but there are no private beaches in Brazil.

What activities are offered?

What are the opening times of the fitness center?

Gym equipment for working out and keeping wellness levels is available to guests in the fitness center, equipped with the latest generation PRECOR apparatus
and cutting-edge technology. Opens from 6:30 AM to 12:00 midnight.

How many saunas and steam baths are there?

There is a private dry sauna in most of the bungalows at the resort.

Does the hotel have rooms with private pools?

Yes, most of the bungalows at Ponta dos Ganchos offer heated private pools, the temperature goes to 40 celsius.

The hotel offers a Nespresso coffee machine in all rooms.

Does the hotel offer water sports?

Does the hotel offer beach lounges or beach cabanas?

Yes, they are offered at no additional cost. 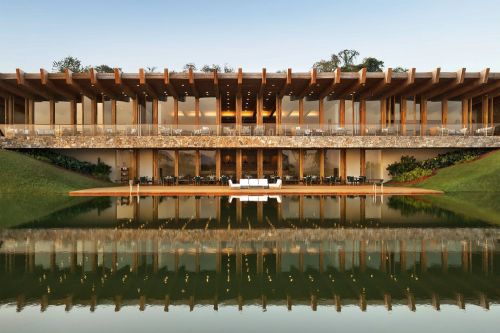 Enjoy São Paulo's verdant countryside tranquility with all the comforts of a Fasano hotel at Fasano Boa Vista. Designed by renowned Brazilian architec...

EXPLORE THIS HOTEL
From 405 USD You are looking for a hotel that's a little out of the ordinary? Then check out Hotel Unique! This one-of-a-kind hotel is located in Sao Paulo, Brazil...

EXPLORE THIS HOTEL
From 476 USD 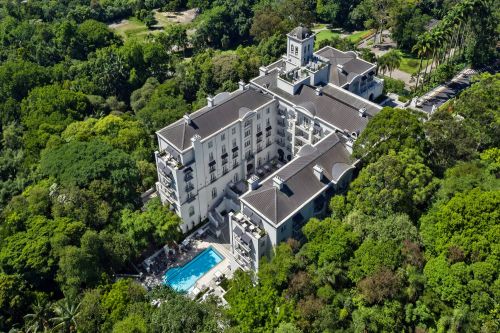 The cosmopolitan city of São Paulo, or Sampa, is the hotbed of creativity. It simply bursts with energy. A stay at Palacio Tangara will allow you to t...