With its lovely leaded glass windows, richly burnished woods, and luxurious fabrics, the inside of Blantyre is exactly what you would expect upon seeing the outside of the building. In the Main House, there are overstuffed chairs, fresh flowers, a light-filled music room, and rooms for private dining — all designed with their guests' comfort in mind. The heart of the house, the baronial Main Hall on the first floor, is an eclectic mix of period pieces and treasured heirlooms specially assembled under owner Ann Fitzpatrick Brown and her mother Jane's discerning eyes.

The Tudor-style manor houses eight exquisite bedrooms and suites, many with fireplaces. The twelve accommodations in the nearby Carriage House echo the warm and lush fabrics, antiques, and style of the Main House, as do the four private cottages. Every bedroom at Blantyre has a distinct character.

Dining is an exceptional event at Blantyre. Late every afternoon, the Main House undergoes a lovely transformation as it is prepared for the delightful dining experience to come that evening. Linens are brought out. Tables are set with sterling silver, fine china, crystal, and fresh flowers. Beautiful music fills the air, and candles are lit. Under the knowing eye of Chef Christopher Brooks, the kitchen is a hive of activity as the finest ingredients are used to create a memorable dining experience.

The History, Heritage, & Today - Robert Paterson was introduced to the Lenox, MA area in the late 1890s by his friend John Sloan (of W&J Sloane). Lenox already had many great estates even before Blantyre, prompting the area to be known as “the queen of inland resorts” or, as Cleveland Amory wrote, “the Switzerland of America.” Paterson acquired the Lenox estate of 220 acres called “Highlawn” from the Dorr family. He tore down the modest house, keeping the outbuildings. Hence, the Carriage House Stables and The Retreat at Blantyre date from the late 19th century. He set about building a property on a grand scale, although the initial plans were purported to be drawn on the back of an envelope by the architect Robert Henderson Robertson. For no less than a castle of “feudal architectural features,” Robert Paterson's concept was replete with towers, turrets, and gargoyles. The house was modeled after his mother’s ancestral home in Blantyre, Scotland. Construction began in 1901, at times employing over 300 people on the grounds and buildings.

The Manor House was furnished in English style with all furniture brought in from England. The family used the house during summer and fall seasons and entertained frequently, as was the fashion in those days. There were garden parties with musicians imported from New York and grand dinner-dances, with each party becoming more and more lavish, befitting the “Gilded Age.” When the end of the era came some 15 to 20 years later, hastened by the introduction of the income tax, so, too, ended a lifestyle that was never to be repeated. Over the next 60 years, Blantyre went through several transitions, including a particularly destructive period in the 1970s.

In 1980, Jack and Jane Fitzpatrick fell in love with the abandoned Blantyre and organized to purchase it for their daughter, Ann Fitzpatrick Brown, who became the eighth owner. Determined to restore it to its former elegance, Ann reopened Blantyre in 1981, after extensive renovation. Blantyre achieved the vision of the Fitzpatricks – a beautiful country house, recognized as one of the finest hotels in the world, where guests can come and stay and experience the life and service of a bygone era.

Beginning in 2000, Ann and the staff of Blantyre planned and worked toward fully winterizing Blantyre. In May 2005, Blantyre opened its doors for the first time in 25 years as a year-round operation, with The Retreat, Blantyre’s cozy and intimate spa.

After Fitzpatrick Brown’s passing in 2016, the property was purchased by Linda Law, a veteran real estate investor, who discovered the Berkshires as a student and had Blantyre on her bucket list for more than three decades. Ms. Law decided that the beloved Manor deserved a twenty-first-century upgrade, with a bow to the old and a nod to the new, bringing this Berkshires getaway resort into a new age of Gilded Grandeur.

Rooms and Suites at Blantyre Lenox 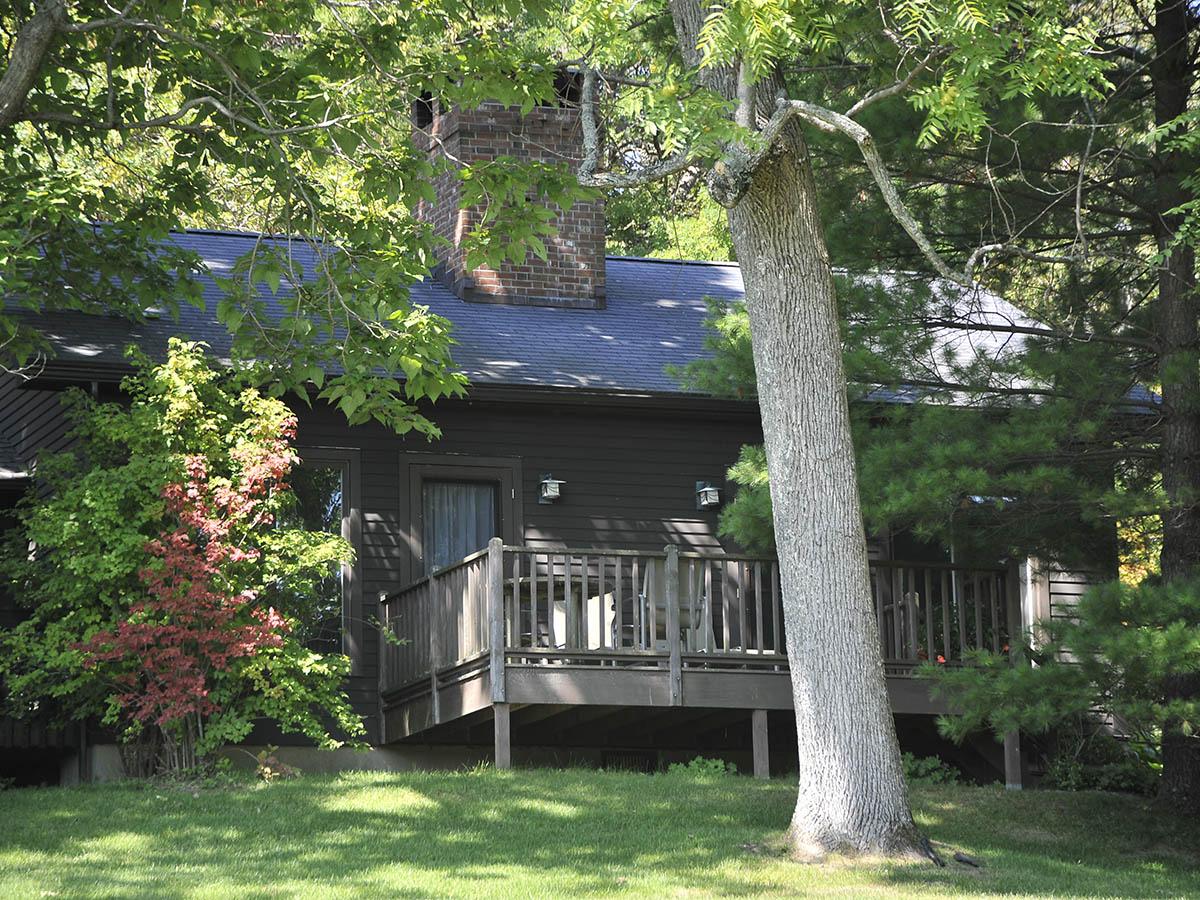 The spacious rooms of the Laurel Suite are decorated with Jane Fitzpatrick’s favorite flowered wallpaper. The elegant king-size bed sits within a larg...

A favorite of many guests, the Crimson Suite is richly decorated in shades of cream, beige, and crimson, with fine damasks and silk. In the bedroom, a...

The Ice House Cottage, like the rest of Blantyre, is known for being beautiful and personal. Fully renovated in 2001, the two-bedroom cottage is grand...

Decorated in soft shades of cream and celadon green, rich damask covers the walls, the sumptuous sofa and overstuffed chairs. The unusually spacious b...

The comfortable sitting room of Riverview has a handsome fireplace crafted of creamy white marble from a local quarry.
An overstuffed armchair and sof... 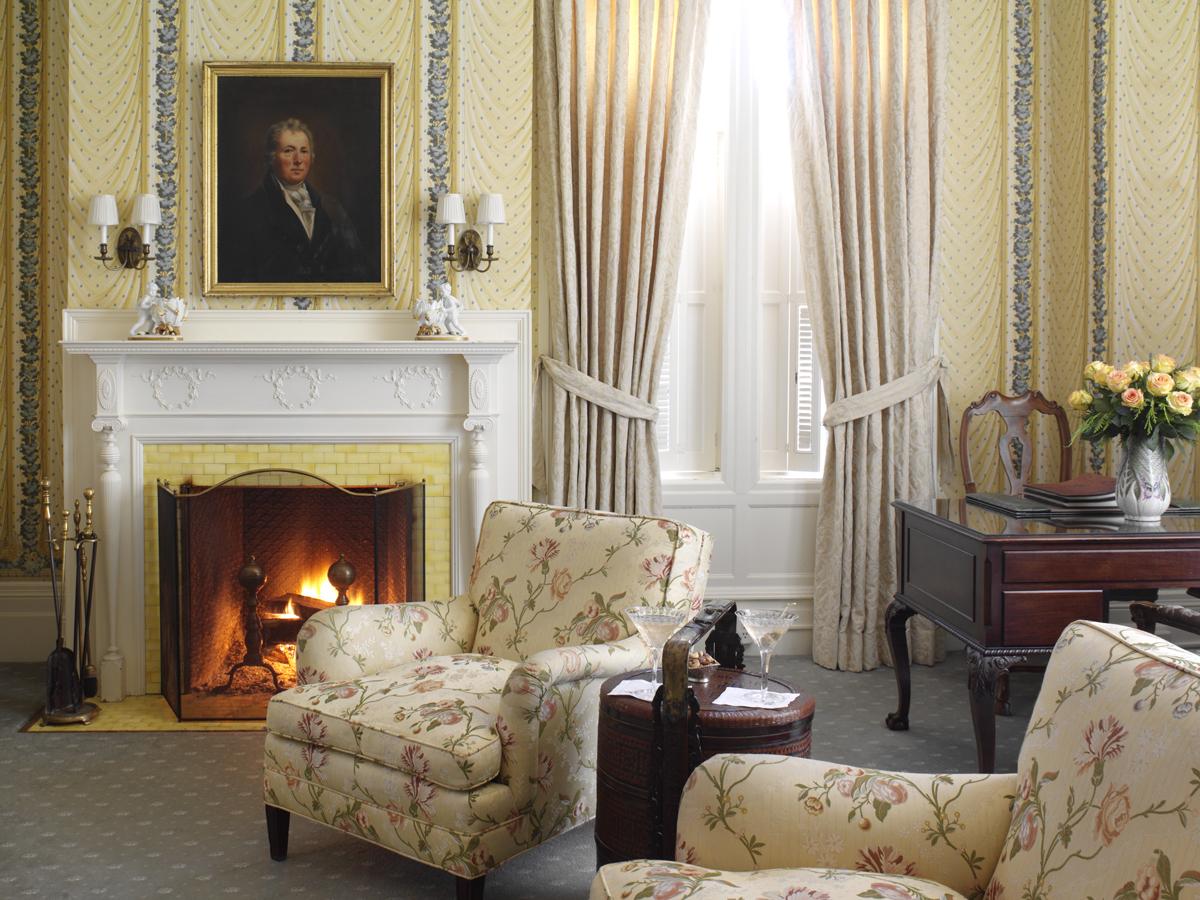 The Corner Room has been lovingly furnished. The original daffodil yellow tiles still decorate the fireplace and drive the distinctive look of this sp... 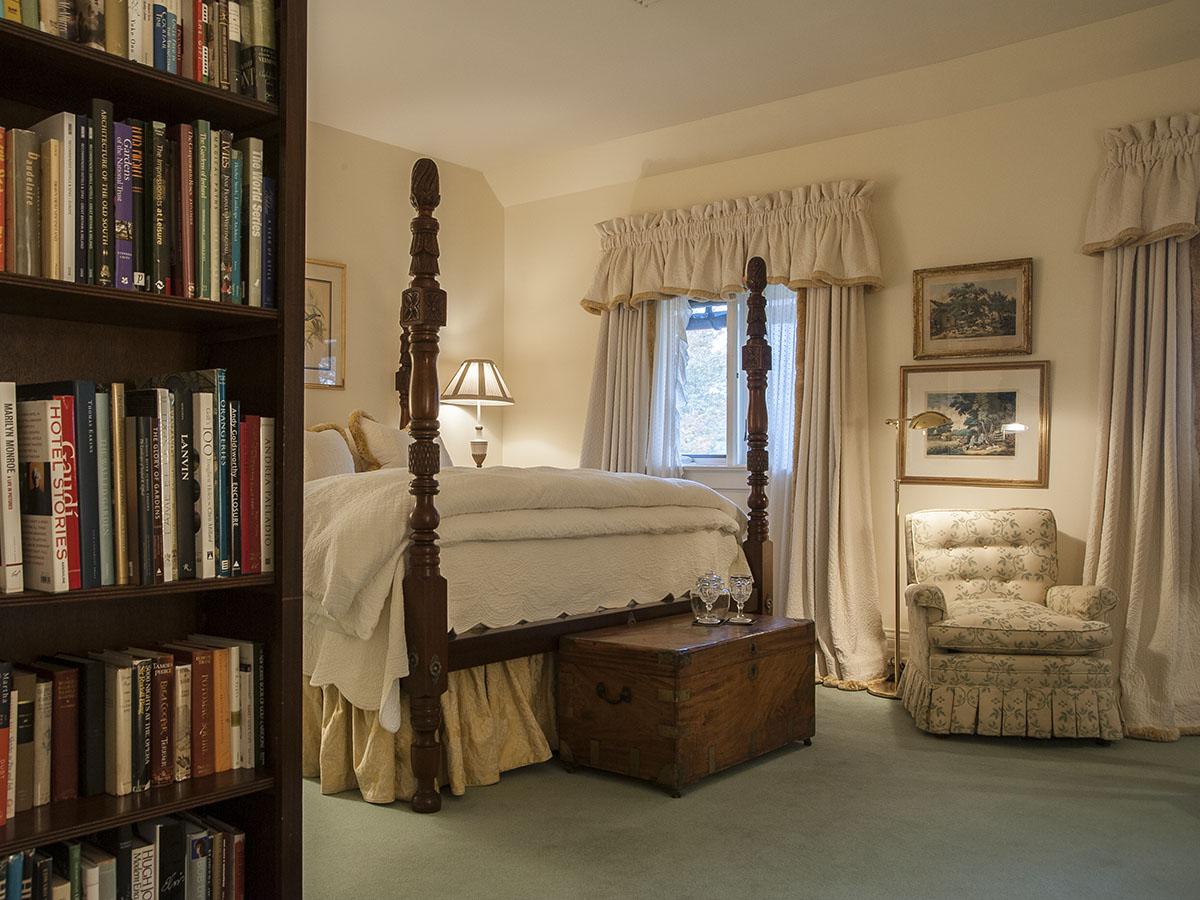 An inviting space, the Bouquet Room’s walls are glazed in tones of cream. Quilted bedspreads made into draperies – the added the fringe – fall to the... 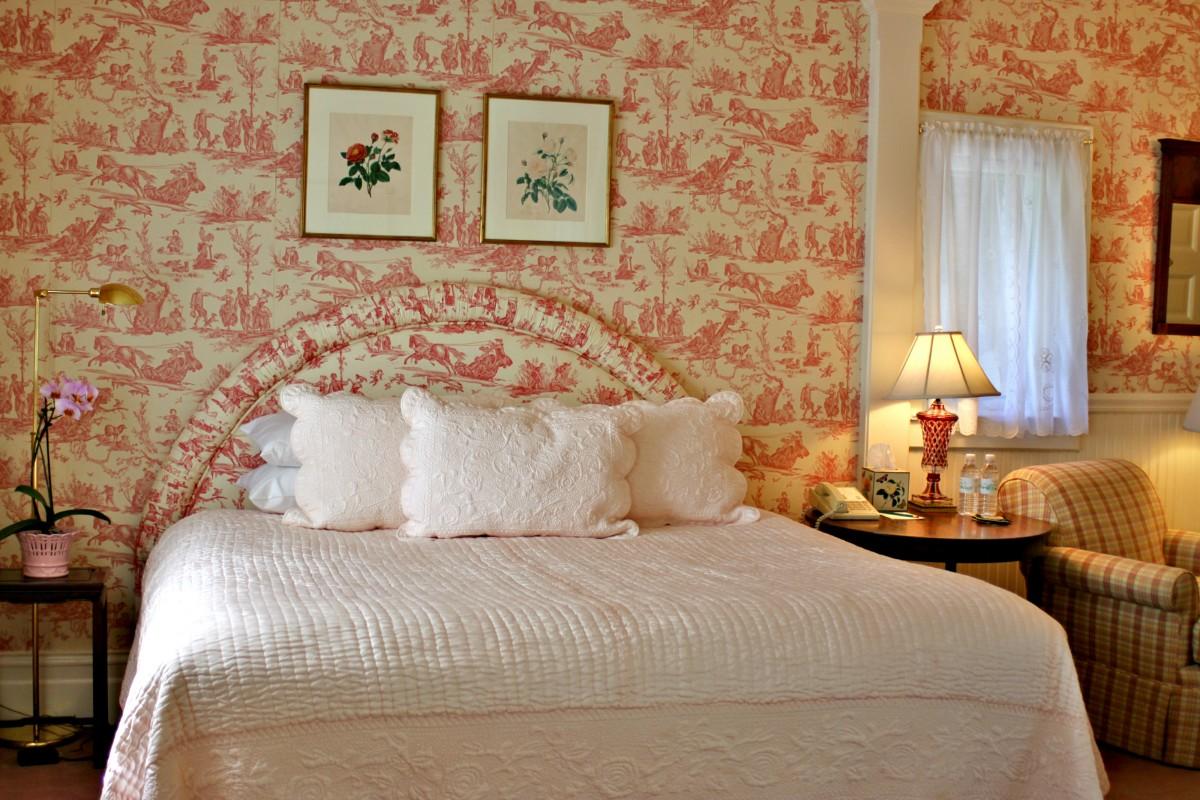 The newly designed Toile is still an enchanting combination of rooms. The Toile Room is a luxurious and intimate haven. Guests are greeted by two over... 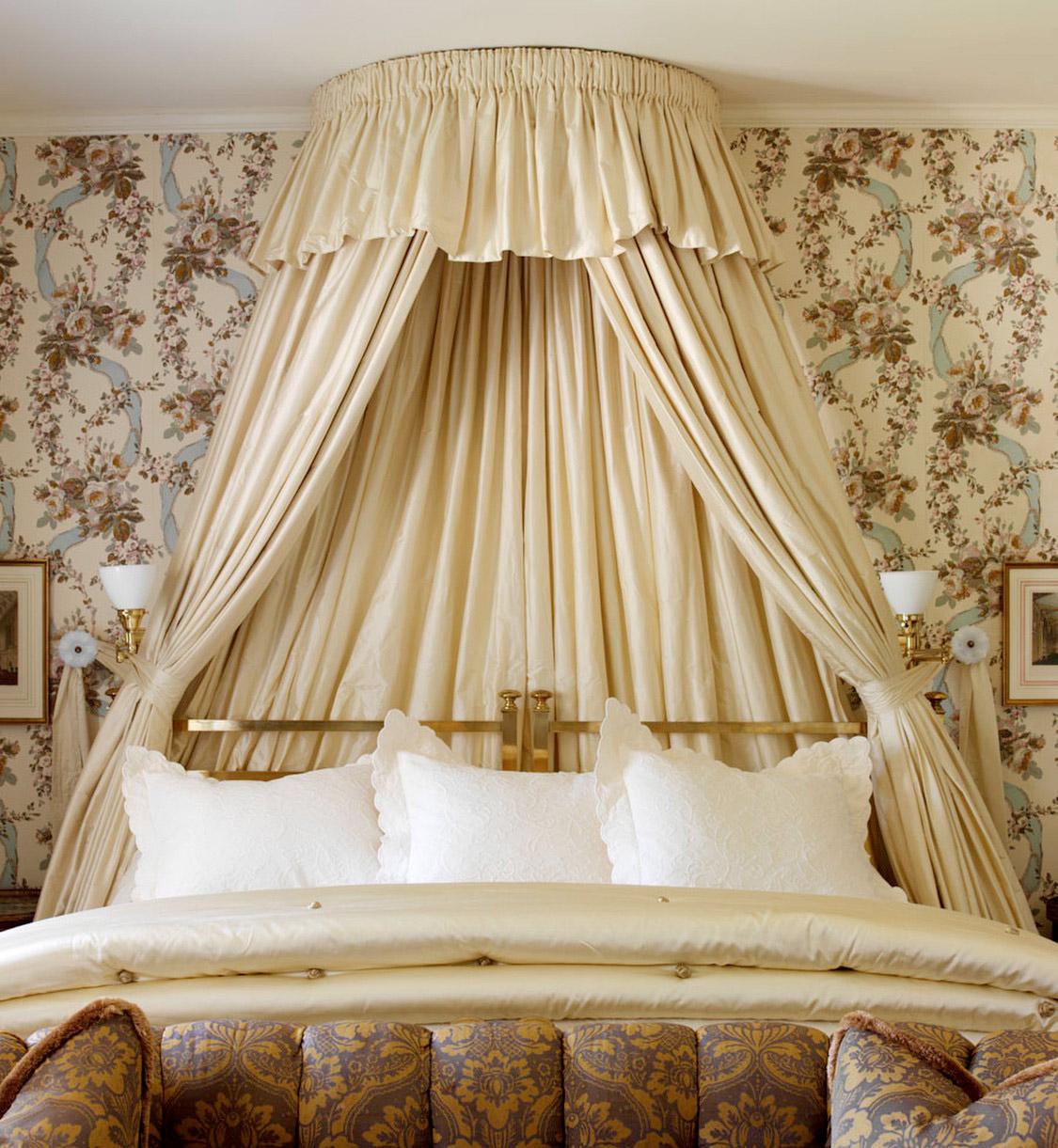 If you have been looking for a cozy retreat, you may choose to look no further than the Ribbon Room. Sumptuous ivory silk hangings lusciously draped f... 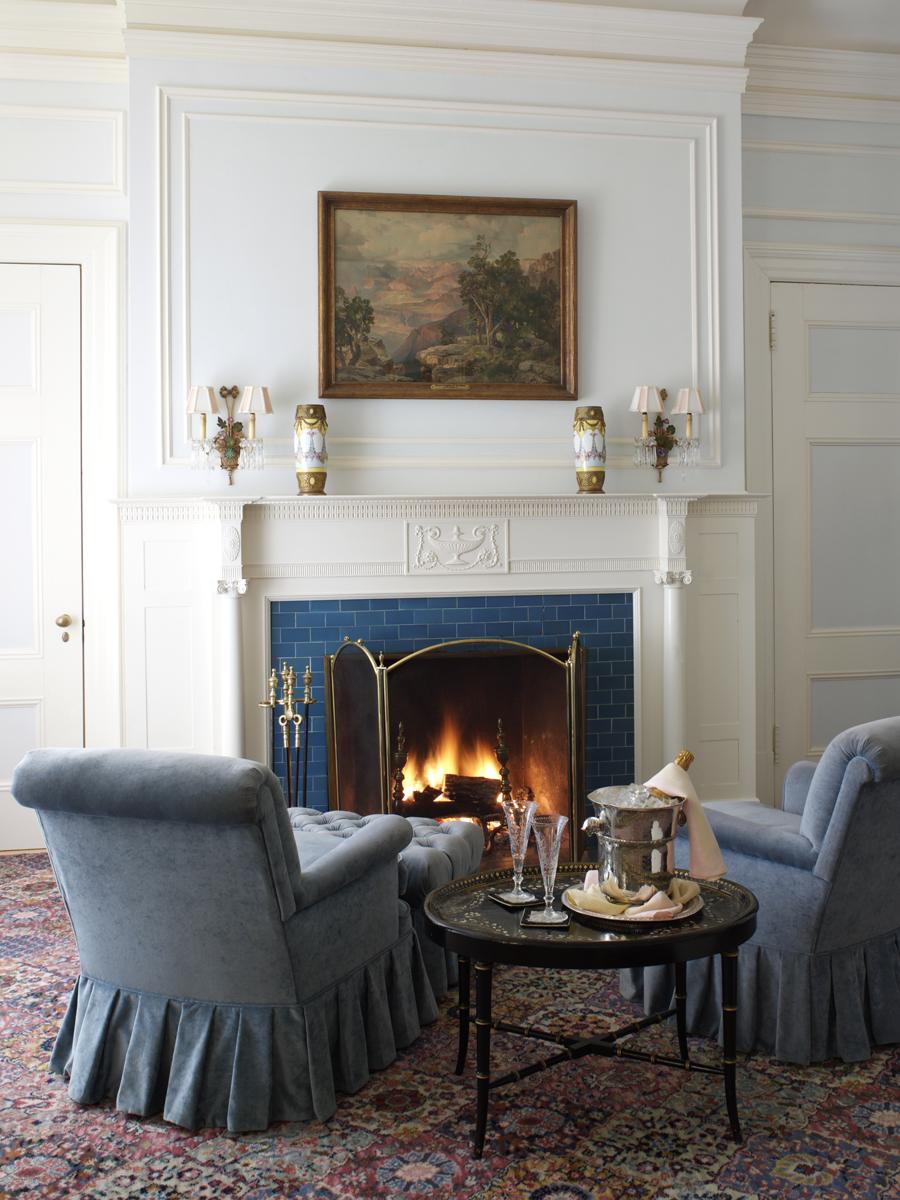 One of the wonderful things about Blantyre is that every room has a distinct personality all its own. The Blue Room – with its soft blue color, painte... 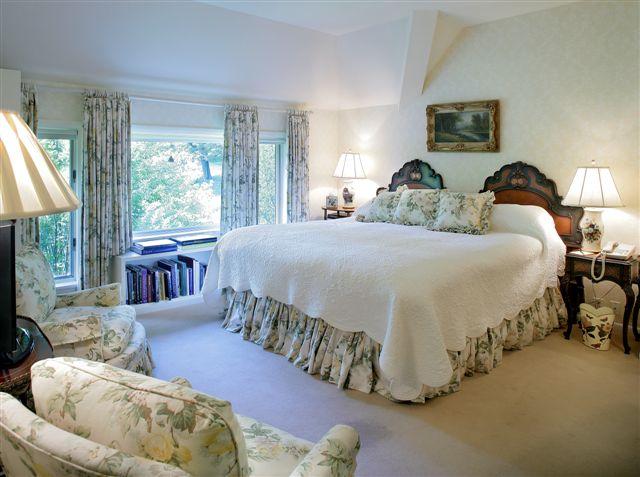 The hand painted headboard of the king sized bed is decorated in soft shades of cream, daffodil and green. Dorr’s sitting room includes a luscious sof... 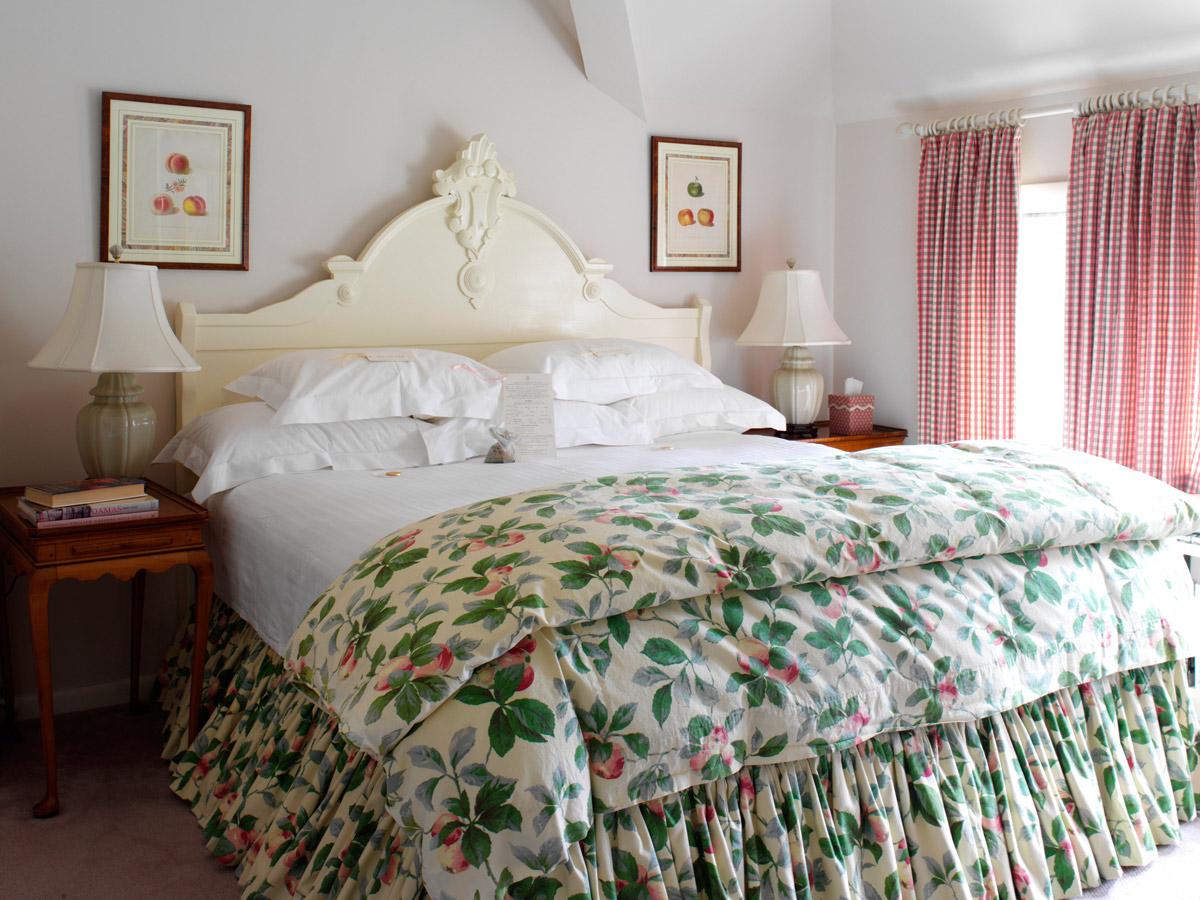 Hillside’s décor is mostly rose-colored with touches of yellow and green; the very comfortable sofa converts into a double bed. Hillside also has a ki... 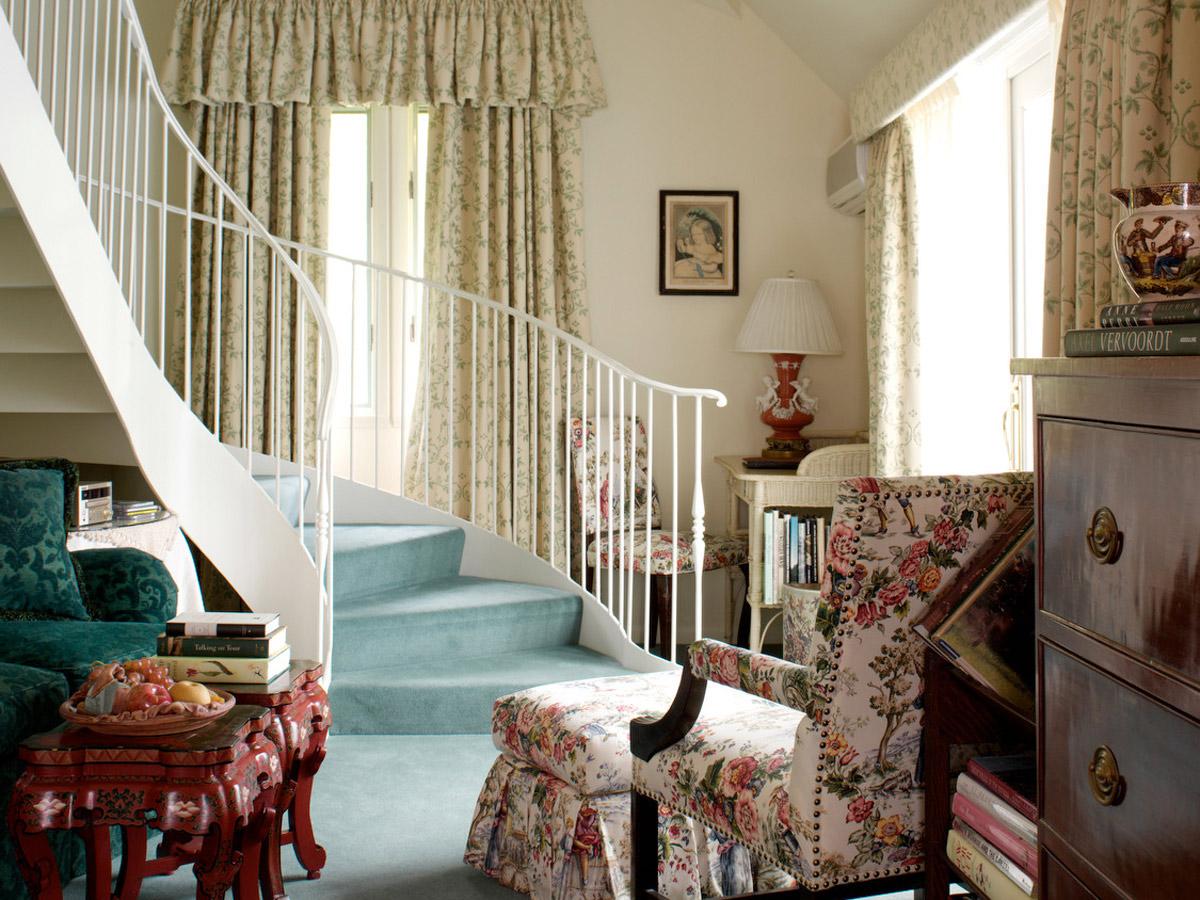 Fernbrook is dressed in shades of butter cream with autumnal tones of gold, red, green and peach with a pretty, hand-painted bell cord decorating the...

Orchard, the center loft, has an attractive sitting room with a mirrored wall. The upstairs loft is curtained with a heavy rose velvet drapery and ros... 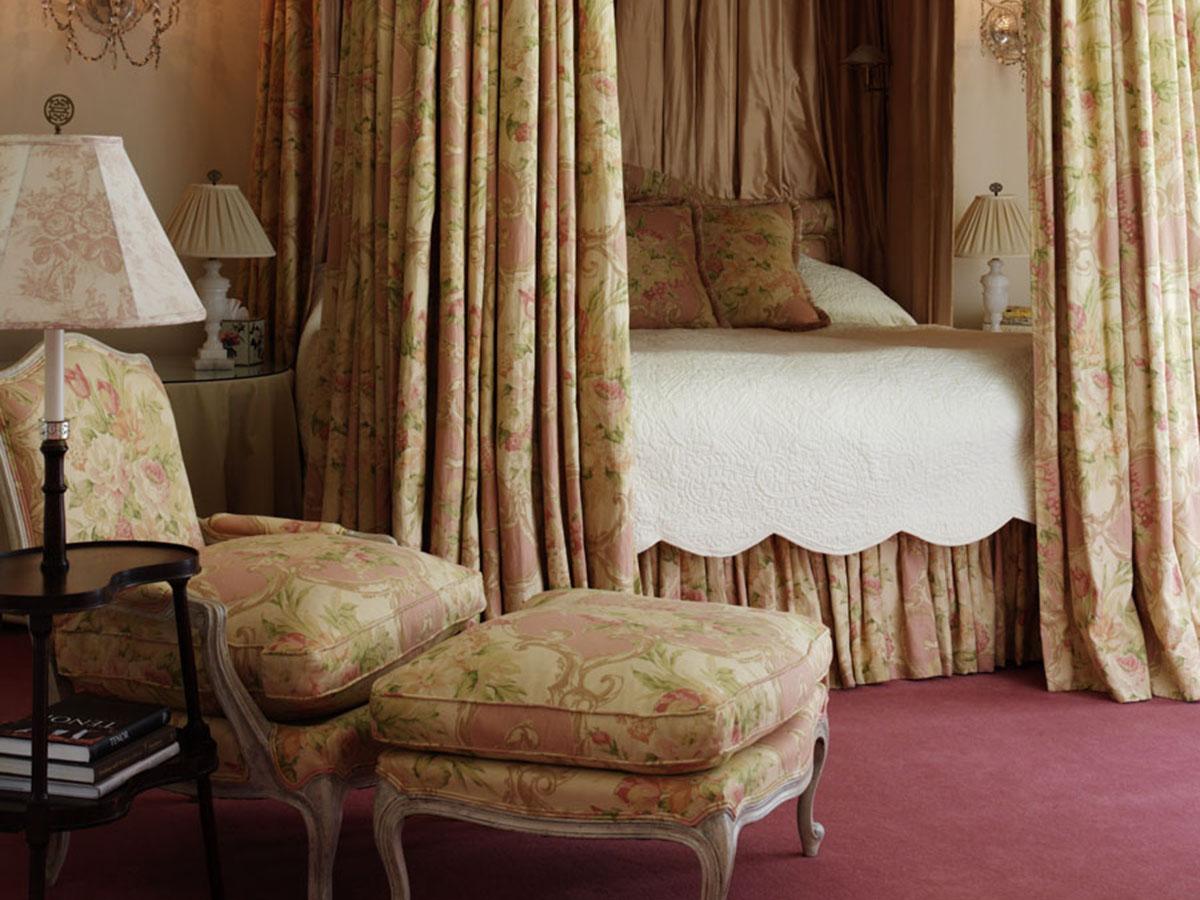 Sunny Court’s walls are painted a soft taupe. The colors of the rooms are a luscious soft mingling of raspberry, rose, peach and cream. 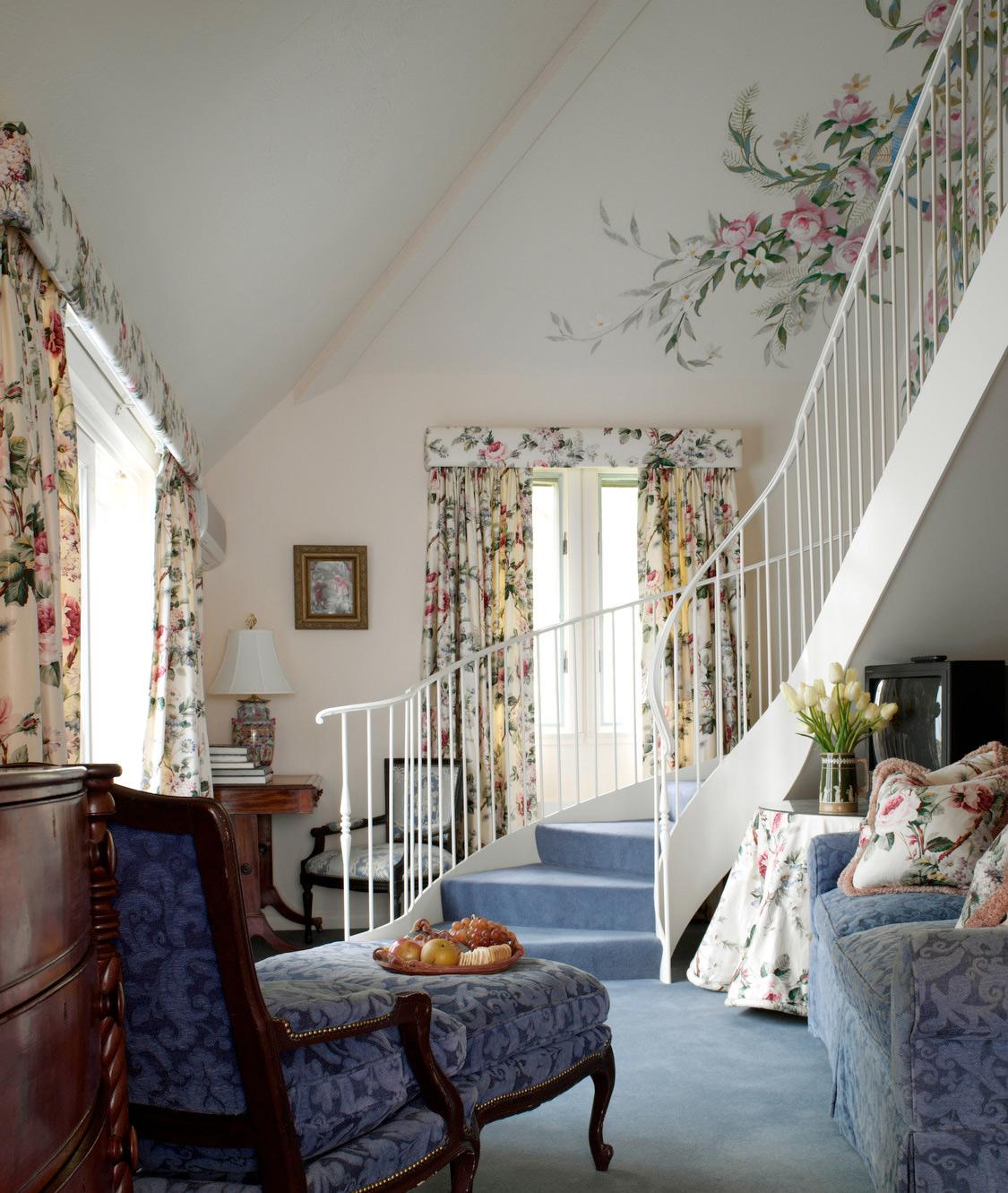 Beautiful blue and rose tones predominate throughout Windyside. On the ceiling is painted an enormous bouquet of flowing peonies with blue ribbons. 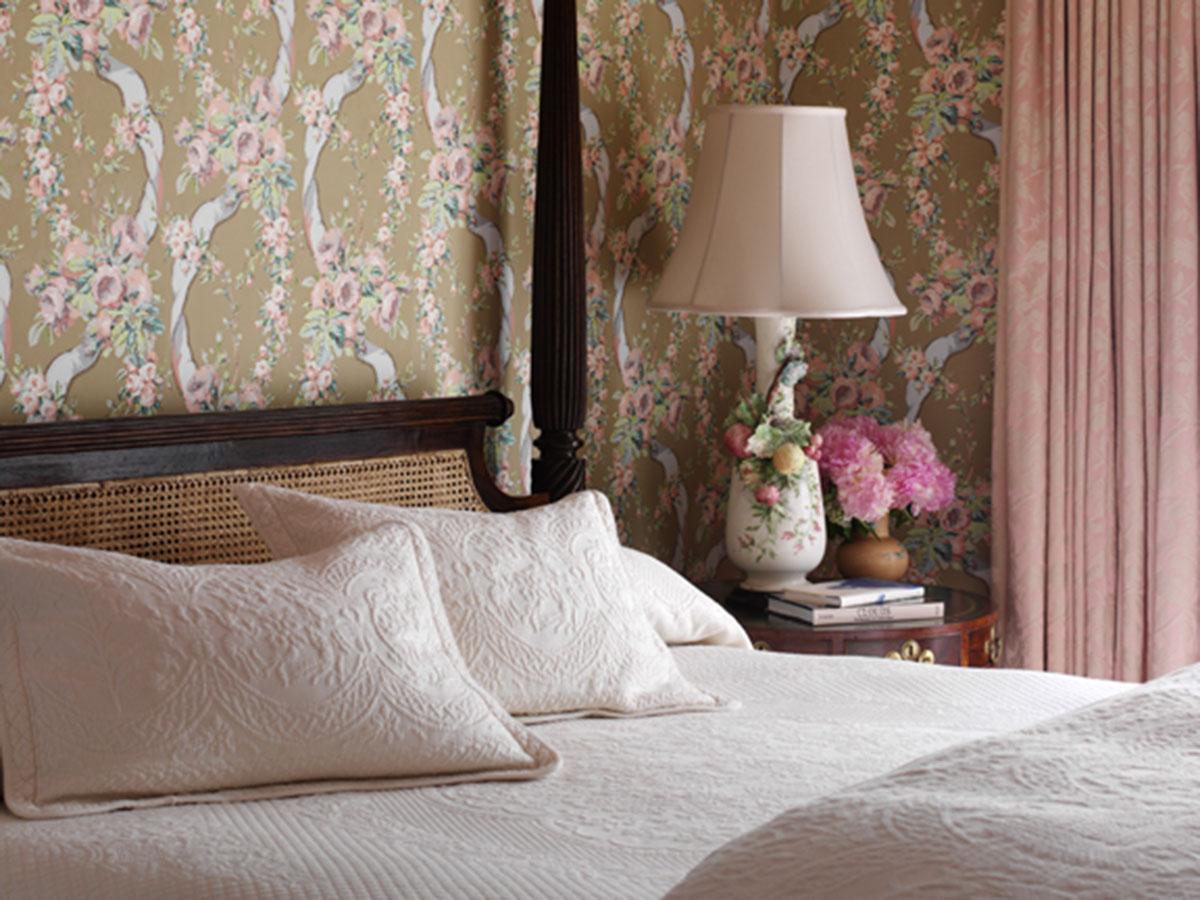 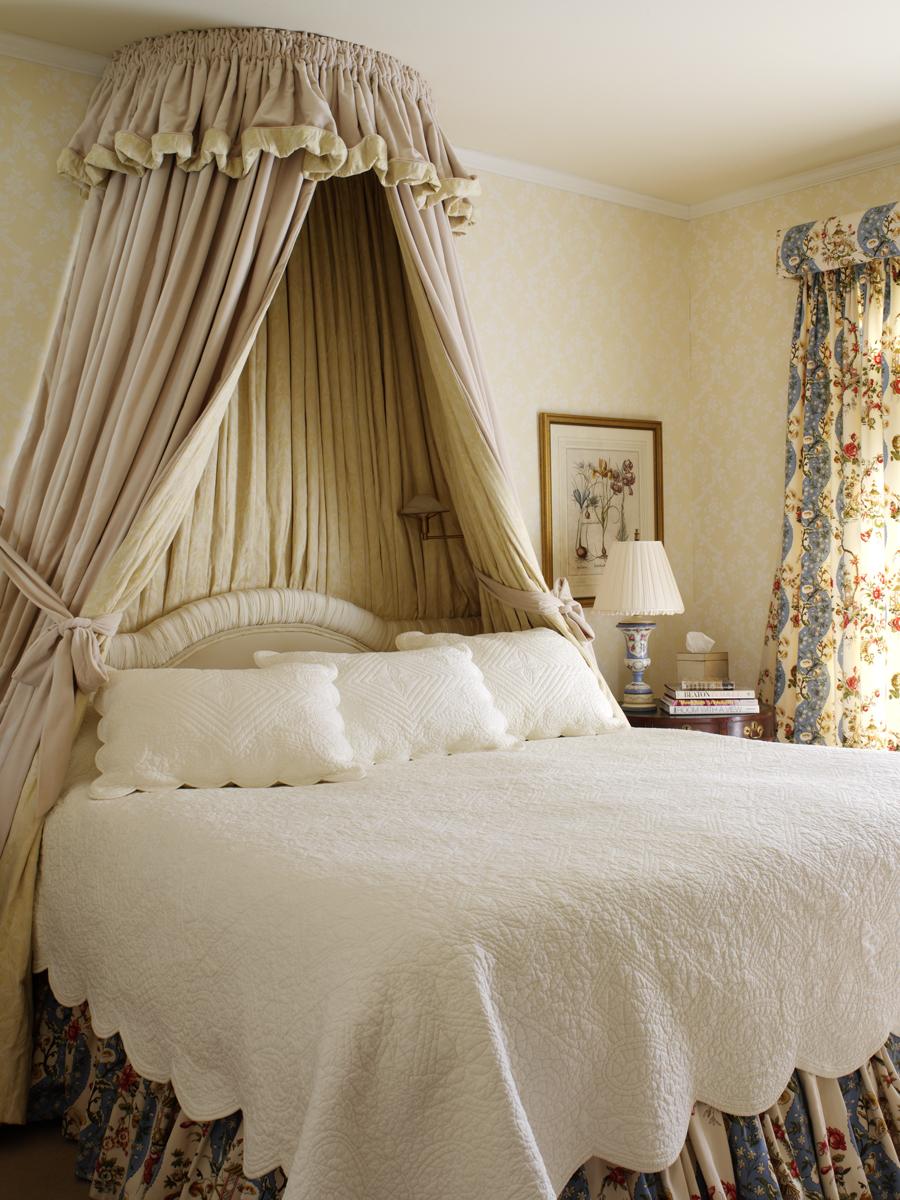 Brookside’s walls are covered with a beautiful pale yellow and cream floral wallpaper and the fabric is a Chinese floral of similar colors with shades... 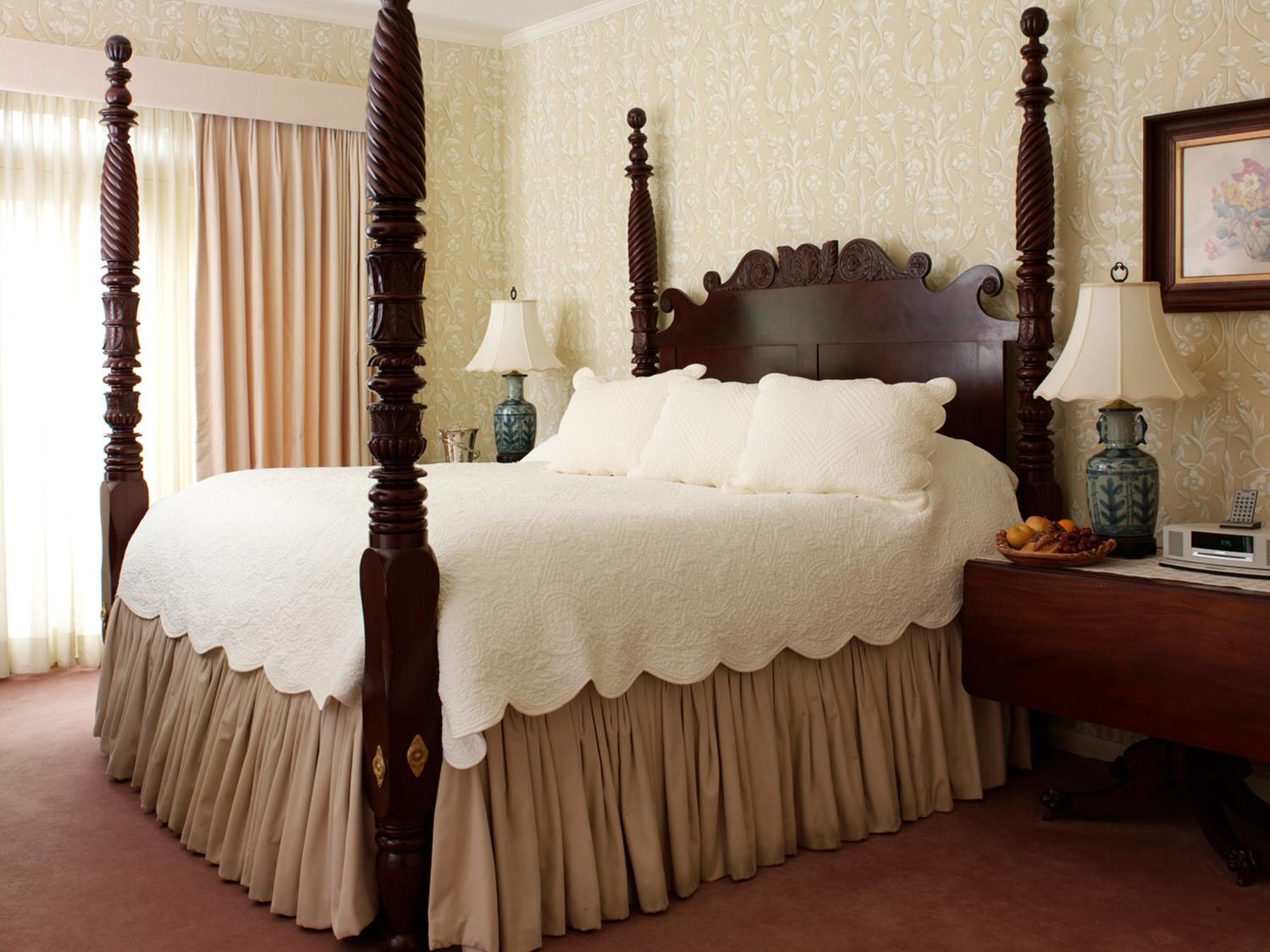 You’ll find colors of soft beige, cream and ivory nearly everywhere in Wyndhurst – on the walls and on the fabrics. King sized cherry bed with carved... 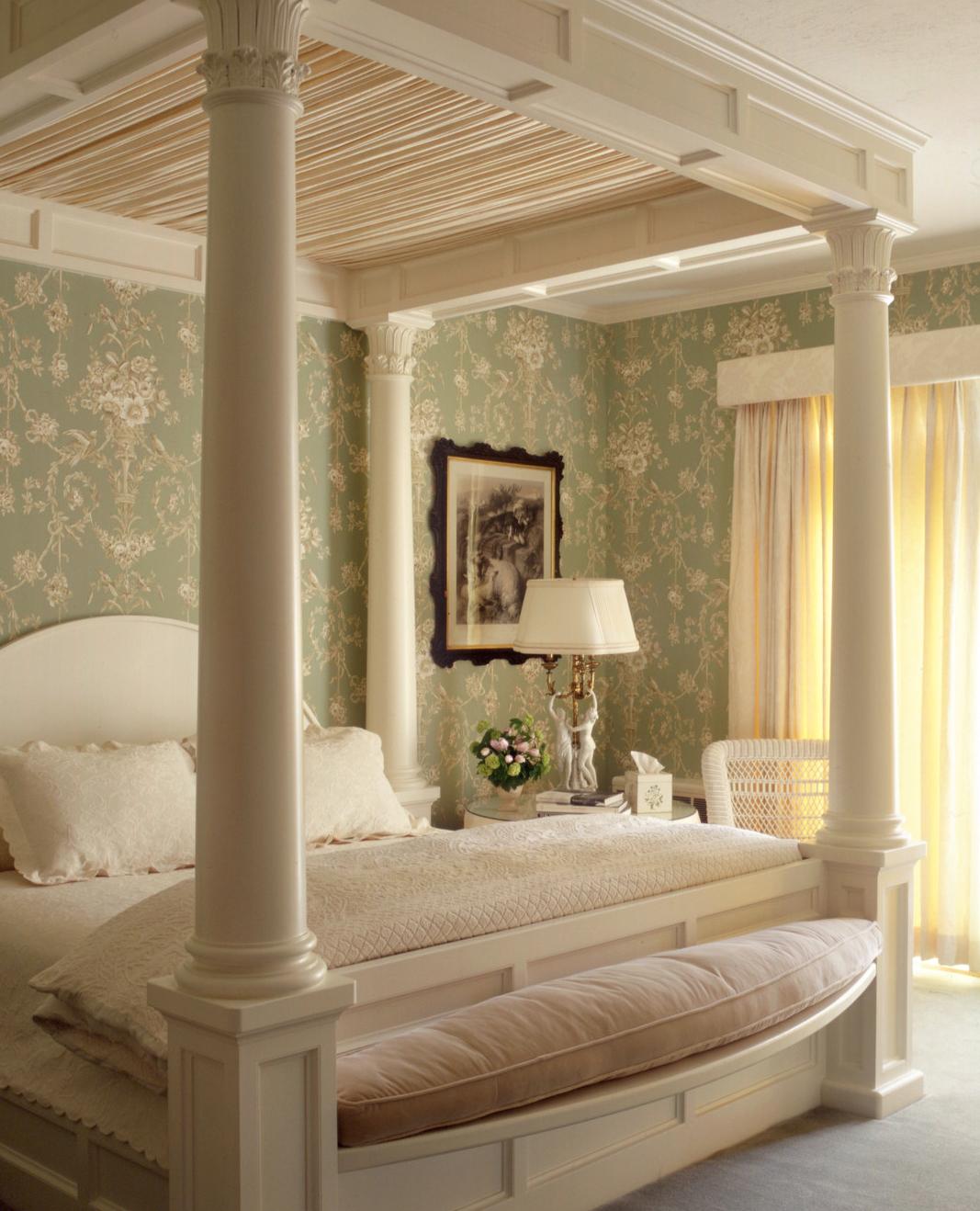 Located “down the path” a quiet, peaceful cottage with full lawn and garden views. This Massachusetts cottage with a fireplace has tone on tone wallpa... 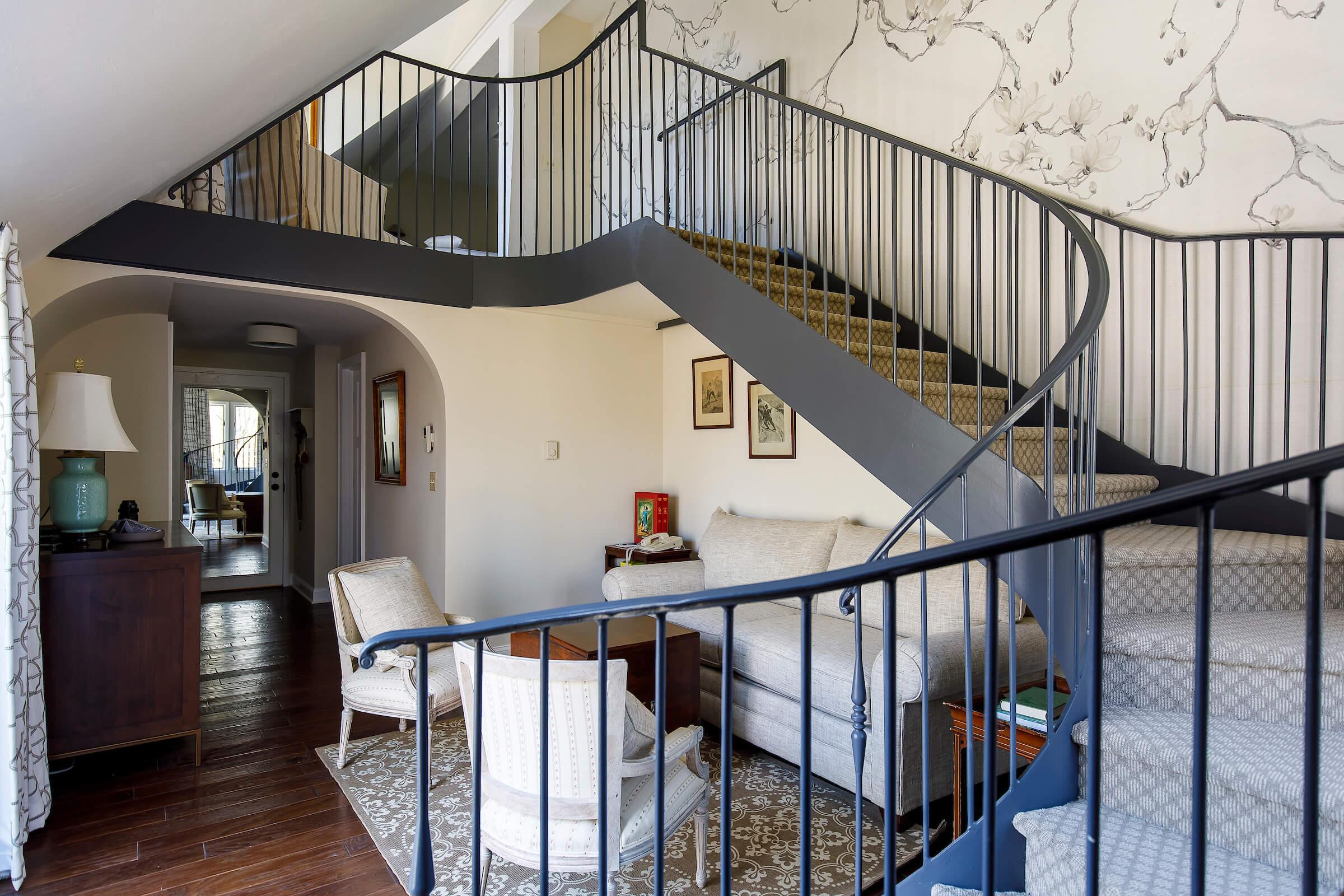 Thoughtfully selected color palettes are enhanced by refurbished antiques throughout this suite in the hotel near Tanglewood. Complete with a cozy sit... 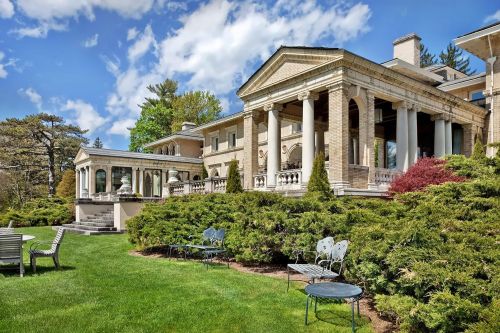 The Wheatleigh Hotel is situated in central Berkshire, United States, in the historic town of Lenox. It is tucked between the mountains and is surroun...

EXPLORE THIS HOTEL
From 230 USD 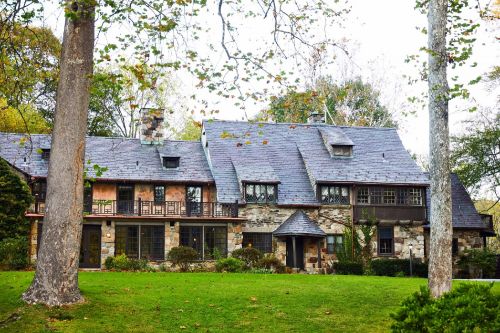 The gateway to the upstate cultural and creative corridor, Troutbeck - re-envisioned and carefully updated in 2017 – is again what it was to so many b...

EXPLORE THIS HOTEL
From 847 USD 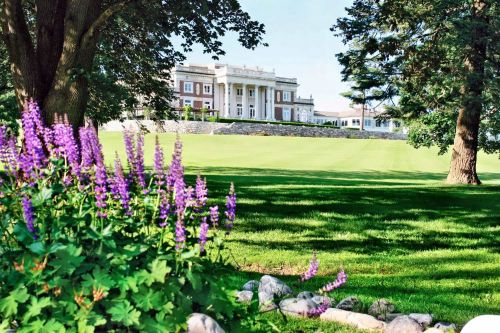 Escape to the fabulous Massachusetts resort. The beauty of the Berkshires has nourished generations of artists and poets. Now write your own story of...