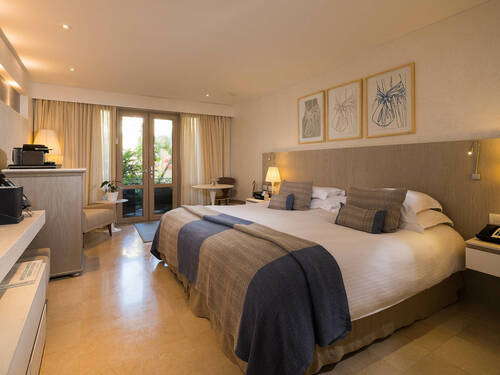 Located in the Republican Area, the Classic Rooms showcase a contemporary décor bathed in light thanks to a large window overlooking the hotel histori... 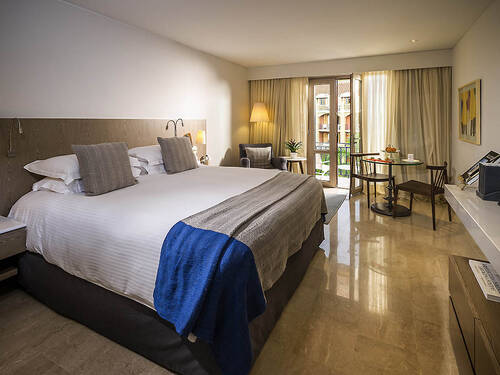 The Superior rooms are the natural choice for couples or business travelers. Delve into crisp, luxurious bed linens to experience the wonders of the e... 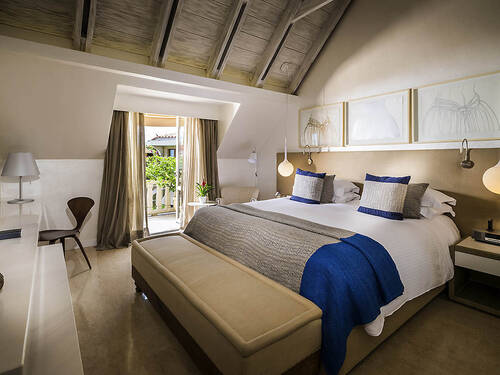 Treat yourself to splendid views of the pool and the Caribbean Sea from your luxurious balcony. Its high ceilings and wooden beams lend a touch of Fre... 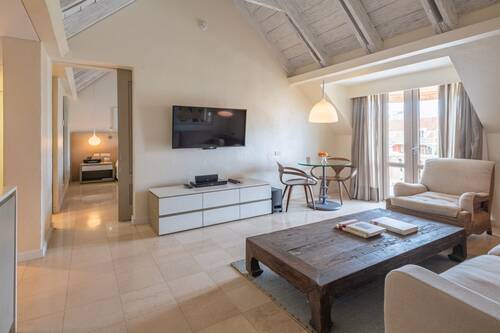 This 70 m² / 753 Sq. Ft. suite is located on the fifth floor of the 19th Century Republican area. It consists of one bedroom, a sumptuous bathroom equ... 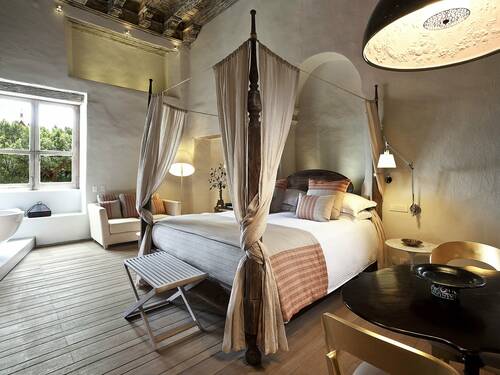 Located on the third and fifth floors of the Colonial area, overlooking the historic center, the Colonial Suite is a romantic haven decorated with woo... 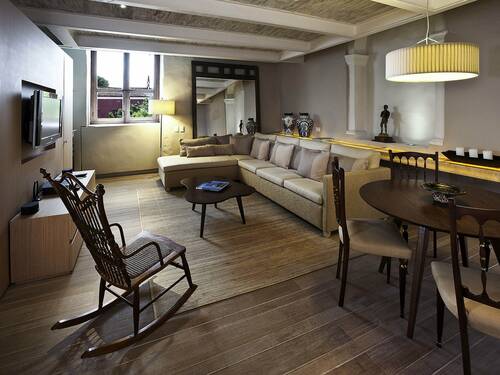 Enjoy the luxury of a spacious stay in the Colonial Duplex Suite. Located in the colonial area, overlooking the historic center, this suite is the per... 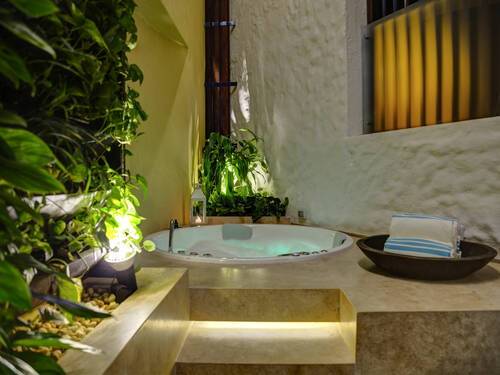 Located on the first floor of the Republican area, this 73m² / 785 sq. ft. suite is distributed in two levels. The first floor has a large and full ba... 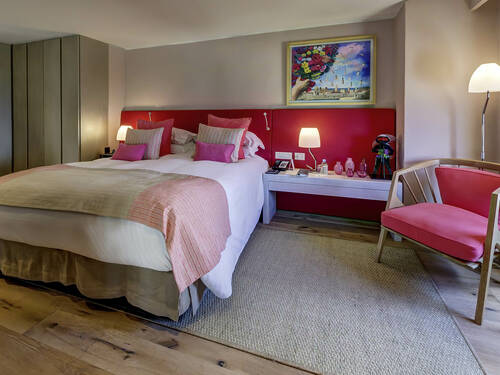 Located on the third floor of the Republican Area, the Grau Suite is ideal for guests who wish to experience the magic of the Colombian culture. Distr... 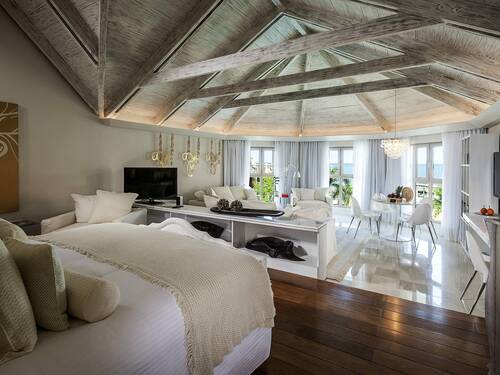 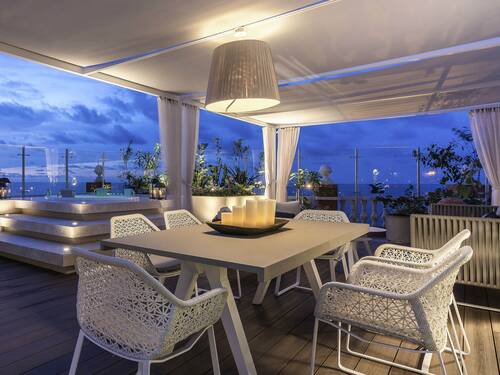 Occupying the fifth floor of the Republican Area, the Amaral Suite combines a large interior space with a remarkable terrace overlooking the Caribbean... 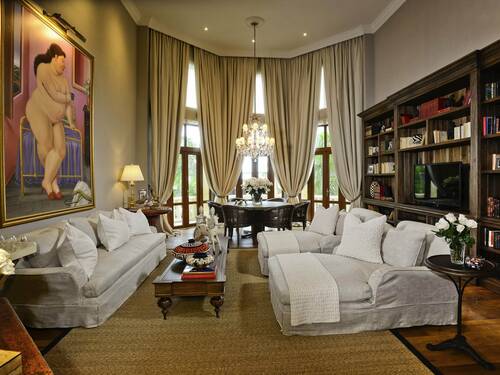 Located on the third floor of the Colonial area, overlooking the pool, this emblematic suite consists of a grand sitting room of double height ceiling...


Sofitel Legend Santa Clara Cartagena - its walls, which acted as a defensive shield in the past, blend in with colonial balconies and republican buildings that evoke the splendor of bygone eras. After significant efforts, the Sofitel Legend Santa Clara Cartagena opened its doors as a luxurious hotel bursting with history, magic, and impressive anecdotes…."

In addition, this property offers the most exclusive services, including an outdoor pool, fitness center, hammam, massage treatment room, and dedicated concierge, everything you need to make you feel at home with the added luxury of a 5-star hotel.

An area inspired by the best French style with fixtures, architectural techniques, and features dates back to the Columbian republican era. A spellbinding experience that contrasts with the history of luxury rooms. With pleasure and relaxation in mind, the Sofitel Santa Clara hotel has been reinvented with innovative spaces. Finely renovated suites are located in a 17th Century building, perfectly combining colonial architecture with modern comfort.

With exquisite cuisine of an international standard infused with local flavors, these colonial-style restaurants offer a menu that caters to everyone's tastes, from simple brasserie-style dishes to haute cuisine. Surrounded by a Caribbean paradise, relax and unwind in a friendly place with all the features of the world's most elegant bars, encompassed by a magical tropical aura.

The So Spa offers a sanctuary of relaxation for the body and soul in soothing and luxuriously simple surroundings. The So Spa measures 8611 sq. ft. (800 m²) and includes 8 treatment rooms, a gym, a tea area, and a solarium.

The Legend - Transformed into an upscale hotel in 1995, its path toward excellence has seen it considered one of the elites among the best hotels in the world. To learn more about the legend of Santa Clara, enjoy a 30-minute free legendary tour around the property with the Butlers.

Swimming Pool - Very close to the kitchen was the Convent's orchard, a space where the nuns had to grow food for daily consumption. It is said that among their crops, they maintained banana plantations, beach grapes, and sea grapes. Today, the pool is an icon of the hotel and the guests' favorite place. With more than 260 m², it is the largest pool in Cartagena's city center.

Colonial Area - On the third floor of the Colonial, The area has located the nuns and the infirmary cells. These were simple rooms with very high ceilings and discreet windows. Nowadays, you can encounter the beautiful Colonial Suites combining colonial architecture with modern comfort, overlooking the historic center.

Colonial Garden - In the Convent's central courtyard, surrounded by round arches, an important place for the Poor Clares was located: the well served for water storage and as a soul purification symbol. Today, the well is still present, along with genuine palms, native orchids, Cartagena ferns, and various endemic plants. The Colonial Garden is a haven of freshness and tranquility of 576m2, making it the most extensive garden inside the walled city. Within the pillars of the Legend brand, Sofitel Santa Clara pays tribute to the culture with artworks by famous artists such as Jim Amaral, Hugo Zapata, and Enrique Grau.

Great Santa Clara Hall - In the chapel's colonial hall, embedded in the walls, were the confessional booths, through which the penitent nuns communicated with the priest. In the Convent's chapel, the current Great Santa Clara Hall, you can still see the layout of the altar on the wall. The original altar was transferred to the chapel of the Lady of Candelaria is located on top of "La Popa" hill. The walls of the entire colonial area are very well preserved thanks to paint made from eggshells.

Republican Area - On the right-hand side of the orchard (current swimming pool) were the rooms and school of the novices. On the left-hand side were located the nun's servants' rooms. Presently, the classic, superior, and luxury rooms can be found in this place, each displaying a charming style.

Hall Gabriel García Márquez - The history is linked to the work of the Colombian Nobel Prize winner Gabriel García Márquez. Paying special tribute to the famous author by displaying passages of his works such as "One Hundred Years of Solitude" (1967) and "Of Love and other demons." (1994), the latter was inspired in the hotel when it was the former Santa Clara Convent. This hall is the adjacent wall to the residence, owned by the master of letters in Cartagena.

The Crypt- In 1949, Gabriel García Márquez was sent as a reporter to cover the story of a crypt found during one of the excavations made in the former Convent. It inspired him to write the book "Of Love and other demons" (1994), based on the story of the Santa Clara Convent. 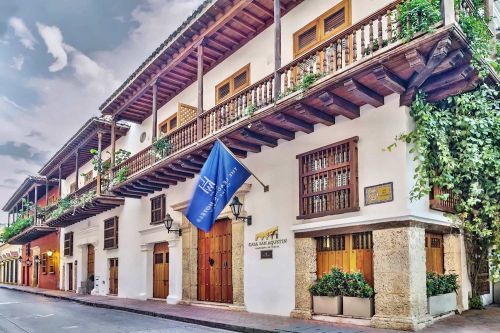 EXPLORE THIS HOTEL
From 401 USD 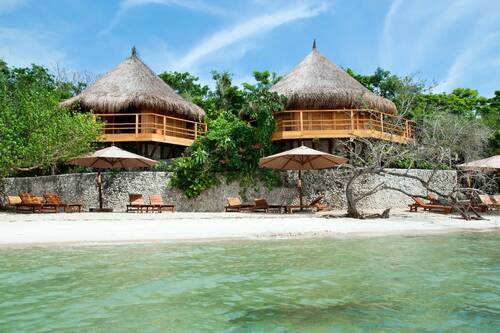 Reconnect and refresh your spirit amidst the white sand beaches and turquoise waters of Colombia's Isla Barú. Located 45 minutes from Cartagena, Hotel...

EXPLORE THIS HOTEL
From 96 USD 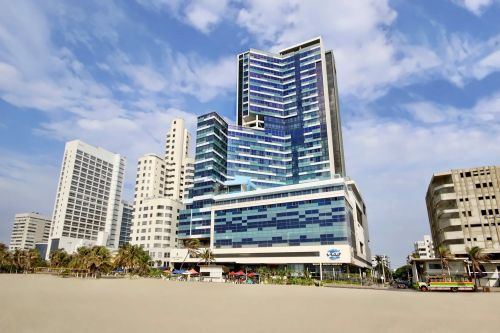 InterContinental Cartagena de Indias is a 5 star luxury hotel in city of Cartagena. Cartagena is Colombia's most popular tourist destination, where th...