Book the The Hay Adams with VIP Benefits

Rooms and Suites at The Hay Adams 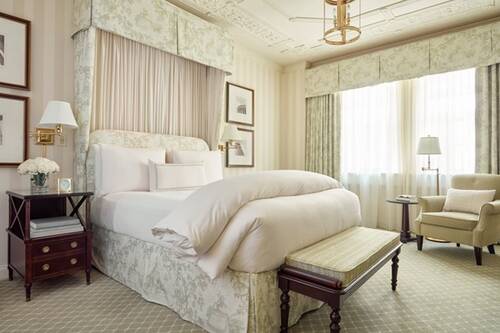 Beautifully appointed with traditional decor in hues of espresso or sage, Superior Rooms at The Hay-Adams feature decorative molded ceilings and a ref... 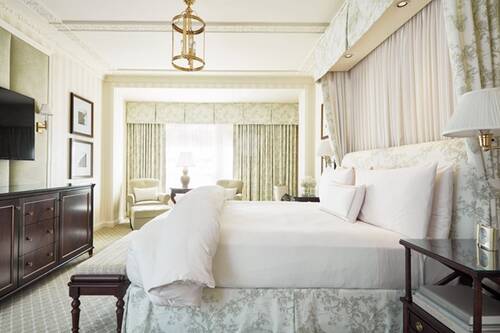 St. John's Church View Room with King Bed. This deluxe room is 385 sqft/36 sqm with a view of the charming St. Johns Church, Church of the Presidents.... 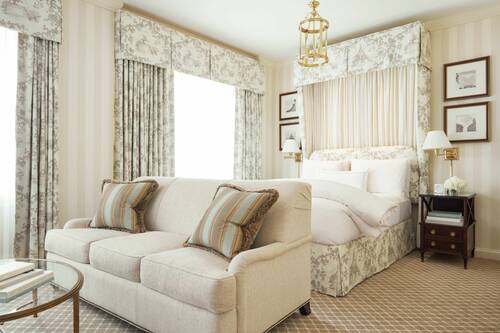 Executive Studio with One Queen Bed. Overlooking the quiet courtyard, this Studio is 440sqft/41sqm. A small sitting area with a sofabed provides addit... 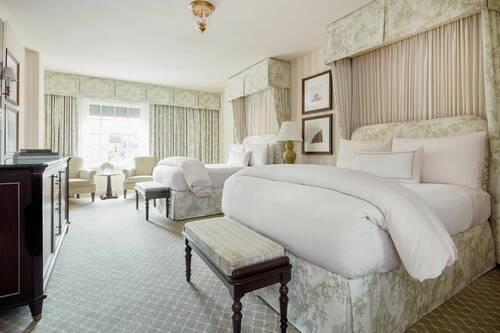 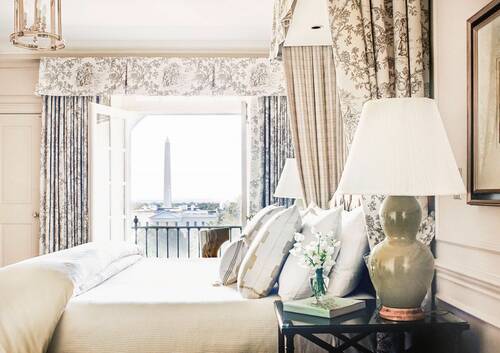 An iconic guest room with a stately view, these top-floor luxury accommodation boast panoramas of the White House for a uniquely DC hotel experience.... 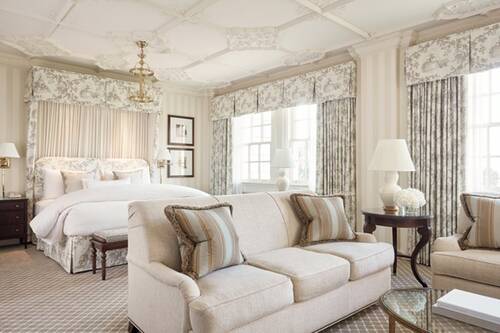 Overlooking Lafayette Park, with wintertime views of the White House, these luxury junior suites each comprise one large room with a King bed and eleg... 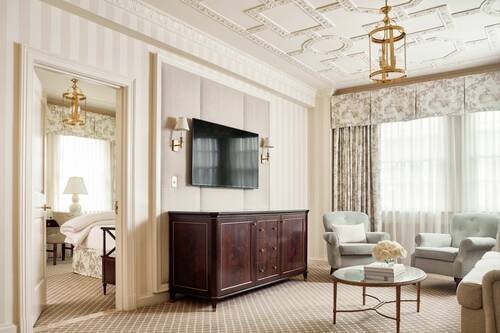 Facing St. John's Church, these luxury hotel suites include a master bedroom, separate living room, and one bathroom. The living rooms each feature a... 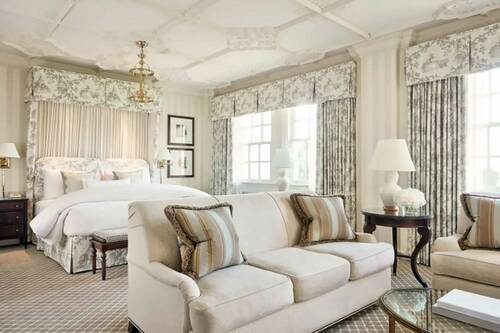 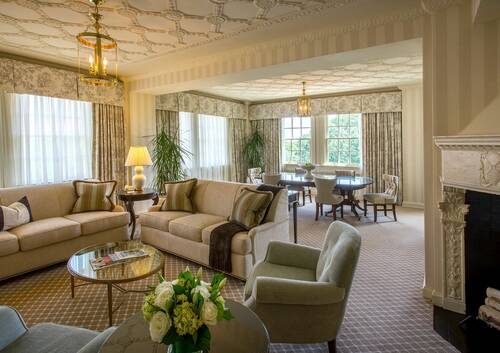 
The Hay Adams is a beautiful hotel to visit. If you are looking for a luxurious hotel in the heart of downtown Washington D.C., The Hay Adams is the ideal choice. 5-star rooms, surrounded by the White House, St. John's Church, and the beautiful Lafayette Park, are the personification of sophisticated dwellings.

The Hay Adams Hotel is the boutique hotel of choice for the contemporary luxury traveler. This is because of its hospitable facilities and attentive staff. Exquisite fine dining, classic event and wedding rooms, and the welcoming Author Series are just some of the features of the resort's extraordinary guest experience. The hotel got his name because it was the former residence of John Hay and Henry Adams.

At The Hay Adams Hotel, the White House is the only thing you won't see. This 5-star hotel in Washington Downtown has 124 sophisticated guest rooms and 21 deluxe suites. There is also superior service for meetings and weddings and world-class dining venues.

The check-in and check-out process is quick and efficient, and the room service staff is kind and helpful. In addition, there is a true sense of community among the staff. This is understandable given that many of them have been there for more than a decade.

There is no spa, but there is a fitness center and complimentary bicycles for guests to use.

Many high-ranking government officials of the United States have stayed here because of its closeness to the White House, which is why this downtown hotel is so popular. For example, President Obama spent 10 days with his family here in 2009 before relocating to the White House. Moreover, guests may access the National Mall's museums and many Washington monuments on foot or by bicycle. It's a six-minute walk from Lafayette Square to the Farragut North metro station, surrounded by lush greenery.

Besides, this area is home to some of the most diverse communities in the country. Nearby metro stations make it easy for visitors to experience prominent institutions and historic sites. There are also attractive outdoor squares and parks and all of the attractions in the District of Columbia.

There is also a slew of other must-see attractions. Like the Smithsonian and Washington Convention Center, Attractions in the immediate area are easily accessible by Metro. Farragut Square, Lafayette Square, and other sought-after locales are within walking distance. You'll be able to see all of Washington, D.C.'s most famous landmarks from this hotel. It sits right in the middle of everything.

The 145 luxurious rooms in the Hay Adams hotel encapsulate the rich culture and history of Washington, DC. Besides, there is magnificent furniture, timeless décor, and the unrivaled comfort of your house. Intricate crown moldings, ornate fireplaces, brass lighting fixtures, and a gentle color scheme of milk, sage, and espresso are just a few of the fine features in these luxurious rooms.

Additionally, images of the White House are in the black and white artwork that depicts the city's historic landmarks. Finally, the marble bathrooms have Etro toiletries and re-polished brass fittings.

Choose from various luxurious hotel rooms and suites, each with a unique view of Washington, DC attractions. Moreover, some are overlooking the White House. There are also bedding choices to fit your needs.

Hay-Adams is more than a hotel. It is one of Washington, D.C.'s most sought-after locations for excellent dining and opulent entertainment close to the White House and the National Mall. The sophisticated environment is ideal for business dinners because of its longstanding reputation as the go-to location for Washington, DC's premier eateries. Furthermore, families and friends like getting together in this elegant environment.

It was named one of the "World's Best Hotel Bars" by Forbes.com. It is the most excellent "place to be seen but not heard" in downtown Washington, D.C. Off The Record is a favorite hangout for Washingtonians and guests of The Hay-Adams. It is adorned with caricatures of the city's political elite from the past and present.

The hotel's posh bar features inventive cuisine and an impressive wine list. The 9th-floor venue, Top of the Hay, has been temporarily taken over by Off The Record. French doors lead onto an expansive balcony in this room for those who like light meals and seasonal beverages with panoramic views.

The Hay-Adams' meeting rooms and event space are a big attraction, and many wealthy weddings have taken place there. In addition, the hotel maintains a low profile; the conference area on the hotel's top-level even has its private elevator and its business center.

Furthermore, Hay-Adams welcomes dogs weighing no more than 25 pounds inside the luxurious hotel. Guests can make arrangements for pet-friendly lodging at the time of booking.

The Hay Adams Hotel prides itself on its status as the region's most hospitable and modern luxury hotel. It is beginning with its commitment to exceptional guest experiences, the environment, and maintaining the most inviting hotel in Washington DC. Moreover, they guarantee the best available rates. So stay at the Hay-Adams if you're looking for an authentic Washington experience. 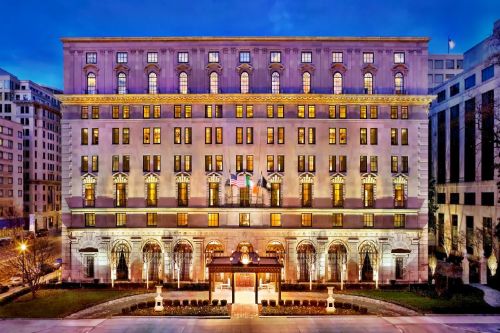 Take in the sights and sounds of the nation's capital at St. Regis Washington, D.C. Since its opening in 1926, the opulent hotel has stood as a quinte...

EXPLORE THIS HOTEL
From 378 USD 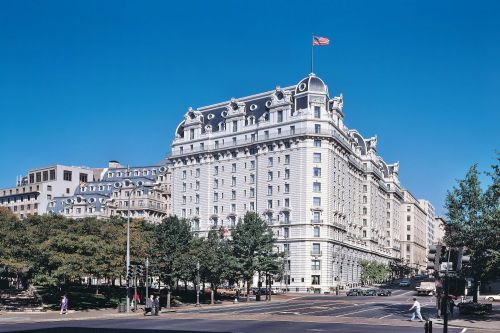 The InterContinental The Willard is located in the heart of Washington, D.C.'s business district. It is within walking distance of several tourist att...

EXPLORE THIS HOTEL
From 396 USD 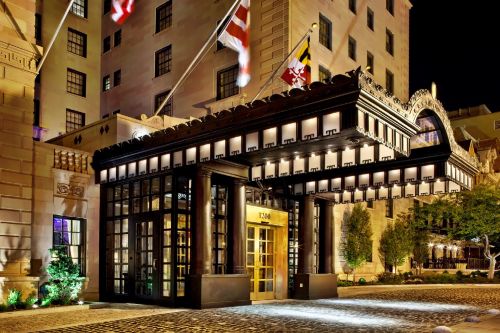 As a tribute to its namesake, the Jefferson is the beaux-arts belle of the United States capital. You'll find detailed crown moldings, fine woodwork,...