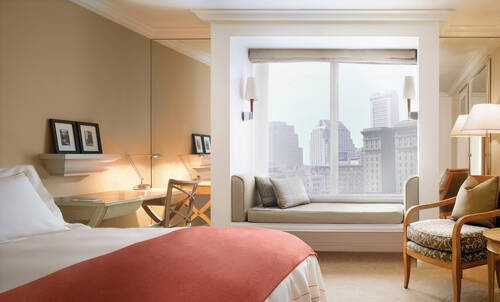 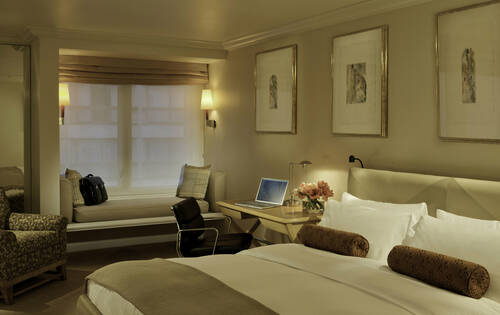 A perfect choice for families, each of the Deluxe Rooms have either a king or two double beds and gorgeous pear-wood panelling. Modern amenities inclu... 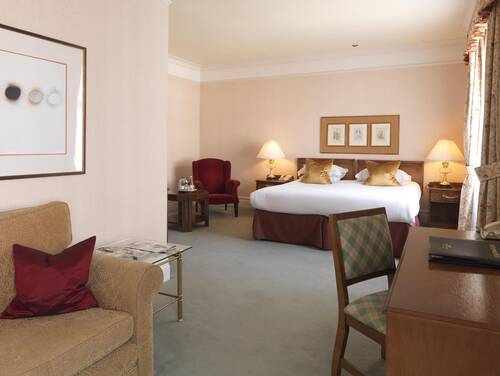 The Stockton Street rooms are located in the front of the building along famed Stockton Street, many with window seats, allowing guests to relax as th... 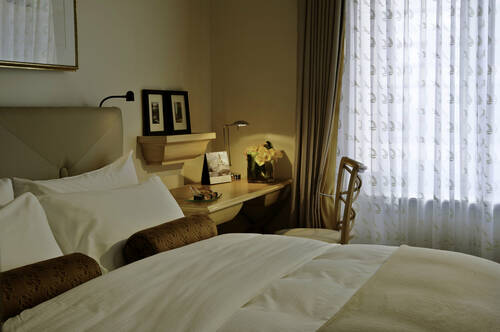 This room offers sweeping views of the Union Square and South of Market Area and features a king bed. 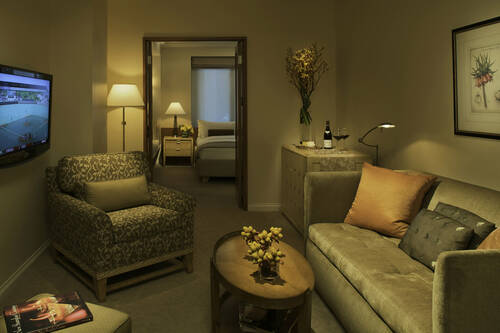 With richly designed living rooms, the Campton Suites are an excellent blend of luxury and comfort. Revel in the breathtaking views of the city and Un... 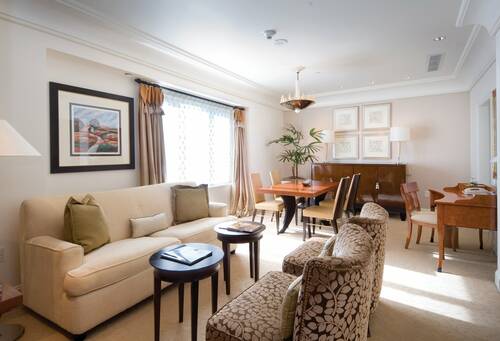 The classic living room, with a spacious conversation area, sofa bed and elegant dining table that seats six, is suffused with light overlooking the c...


Taj Campton Place hotel is one of San Francisco's most iconic hotels. The luxurious accommodations and world-class amenities offer travelers a truly unique experience. The hotel is at Union Square. It is steps from the city's best shopping, dining, and entertainment. The guest rooms and suites feature stunning views of the cityscape. Plus, the on-site restaurants offer an array of international cuisine. This is the perfect place to call home during your stay in San Francisco.

Taj Campton Place is part of the Taj Hotels and a prominent landmark in San Francisco. It is located at Union Square's Stockton Street, the best location in San Francisco. The boutique hotel is also within walking distance of Fisherman's Wharf and Chinatown. It also has access to the financial district, the theater district, and museums.

It is also close to premier art galleries, the theater district, and famous restaurants and shops. Also, the hotel is 14.5 miles from San Francisco International Airport and not far from Oakland International Airport. It is also two blocks away from Powell Street Railway Station. The Campton Place Restaurant and Bistro, as well as the Bar, have been iconic dining spots. Srijith has created innovative menus that blend Indian influences with California cuisine. This is an exciting venture. Michelin Guide awarded him two stars for his creative cuisine.

Moreover, all guests have access to high-speed internet and a business center. There is also a fitness terrace equipped with TechnoGym equipment. Besides, all hotel services are available to guests. These include complete concierge services, dry cleaning, and laundry services. Jaguar house-car service is also offered during limited hours, depending on availability. Furthermore, San Francisco, United States, has some of the best shopping areas in the world. Union Square, Hayes Valley, and upper Fillmore are the most prominent areas.

The hotel is located along Stockton Street. That's in San Francisco's Union Square, just a block from the Apple Store. It is also two blocks away from the Chinatown Gate. Maiden Lane is a short pedestrian-only stretch. It is lined with high-end shops and cafes. It is two blocks south.

Moreover, one block from the hotel is the Powell Street Cable Car. It runs to Nob Hill via Nob Hill, the curvy Lombard Street, and Fisherman's Wharf. However, Market Street, the central transit hub, is a five-minute walk away.

The Taj's unique feature is the open-air gym. This is on the 9th-floor roof of the smaller hotel. Although it can be pretty cold at night, this 24-hour gym is protected from the elements by a plastic tent. The staff can also open the tent's walls to allow for views of Union Square when it is warm.

The staff is friendly and accommodating. They are always available to recommend nearby coffee shops or other events. Besides, a concierge and front desk are available, and a doctor/nurse is on-call 24 hours a day. You can also get 24-hour room service. This 5-star hotel also has rooms that are more accessible than the local laws allow. This includes rooms for the deaf, where doorbells activate lights instead of sound.

Standard rooms, also known as California Rooms, are 250 square feet. Suites range from 450 to 1200 square feet. Deluxe rooms have one or two double beds and range in size between 300 and 390. The 110 guest rooms also feature simple decors, such as low lighting and a creamy color palette. There are also details such as double-paned Windows to keep out noise. The pillow-top, plush beds have Frette linens, feather duvets, and goose-down pillows. There are also retractable pin lights on cushioned headboards.

Besides, all rooms come with Bose Wave radios and Nespresso machines. They also have flat-screen LED HDTVs that can be set up for pay-per-view movies. Many rooms feature leather-topped writing tables with lamps. Minibars are filled with premium alcohol and various snacks. Cabinets are made of pear-wood paneling with frosted glass doors. Some shelves hold mending tools, ironing equipment, and hair dryers.

Bathrooms have walk-in glass showers and soaking tubs. Some rooms also have bathrooms that only have a shower. A matching pair of slippers and a super-soft Ploh robe are included. The rooms and bathrooms have everything you need, including Molton Brown toiletries. Guests can also request additional amenities, such as a humidifier. Rollaway beds can be used in most rooms and are available for a nominal fee. Cribs are also free.

The crown jewel of fine-dining restaurants is the Michelin-starred restaurant. It serves Cal-Indian cuisine. Chef Srijith Gopinathan has revolutionized California's cuisine. He combines California's fresh produce and its fire, smoke, and other techniques with India's regional dishes and traditional spice blends. In-room dining is also available through room service.

People with an eclectic palate will enjoy the chef's Cal-Indian menu at Michelin-starred Taj Campton Place Restaurant. This combination of a European-Californian sensibility and a Spice Route influence results in various tastes. This restaurant is famous for its elegant dining room and outstanding service. Besides, Chef Srijith has been awarded nine Michelin Guide stars for his unique California-Indian cooking.

Patrons can enjoy San Francisco's premier address at Taj Campton Place. The hotel has shops galore surrounding it. Besides, Union Square is just outside. So as you enjoy local culture and food, take a stroll through the large central plaza and stage lawn terraces that lead to Geary Street or Maiden Lane.

There are also many iconic landmarks in San Francisco. These include the Golden Gate Bridge and Fisherman's Wharf. Also, there are neighborhoods like Chinatown, North Beach, and Embarcadero. In addition, sports fans can enjoy a year-round selection of games at Levi's Stadium, AT&T Park, and other spots. The city also offers many options for those who want the arts.

There are many places to see opera, symphony, or ballet performances. These include the San Francisco Museum of Modern Art and the Asian Art Museum. The hotel also has several World-Class Restaurants that offer a variety of cuisines. Expect Chinese, Japanese, French as well as Indian, Mexican, Greek, and Russian cuisine. You can also explore the city at night by visiting the South Market or Mission districts. Here, you will find a wide variety of live and recorded music in popular nightclubs.

Both rollaway and complimentary cots are available (for an extra charge). A 24-hour room service menu is also available for children. It includes grilled cheese and fish finger sandwiches. You can also arrange childcare with the hotel staff.

Taj Campton Place is a world-class luxury hotel. Guests can enjoy a variety of amenities during their stay. These include an on-site restaurant, Bar, and fitness terrace. They have everything you need to make your stay in San Francisco unforgettable. 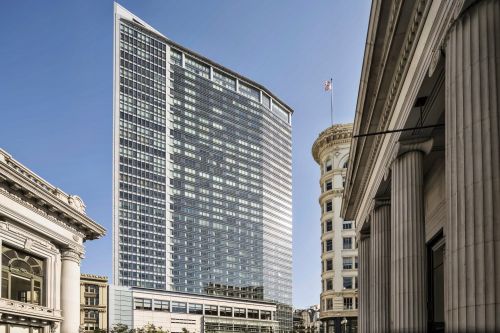 A sophisticated oasis above the city, Four Seasons San Francisco gives you the ideal SoMa location – steps from the Financial District and Union Squar...

EXPLORE THIS HOTEL
From 276 USD 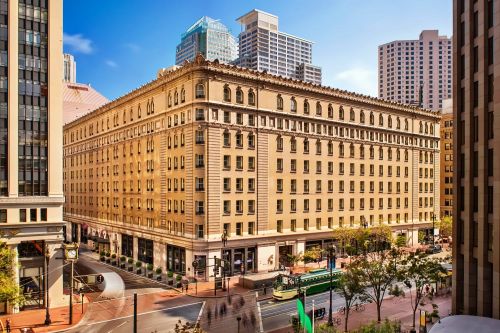 The Palace Hotel San Francisco has been a remarkable icon of San Francisco for almost a century. One of the world's most fascinating cities is home to...

EXPLORE THIS HOTEL
From 541 USD 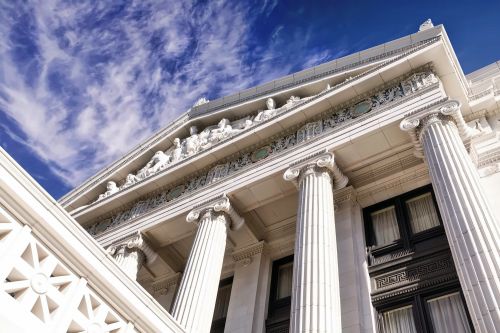 The Ritz Carlton San Francisco is located in the prestigious and historic Nob Hill neighborhood of downtown San Francisco. It is ideally situated for...