Rooms and Suites at Crossbasket Castle

Enjoy the luxury, comfort and refined atmosphere of the Superior Doubles, featuring a very elegant bathroom as well the exquisite luxury amenities. Th...

Enjoy the luxury of space in the Junior Suite. A truly gorgeous and sumptuous room, this magnificent Junior Suite overlooks Crossbasket Castle’s beaut...

A very unique luxurious suite with its own defining personality, the Downie Suite this beautiful suite features a separate lounge with large comfortab...

A very unique luxurious suites with a defining personality, the Lindsay Tower spread throughout four-storeys and offering the ultimate in space, luxur...


Crossbasket Castle is one of Scotland's most luxurious hotels and event venues, and it is in the heart of the Highlands. It's a beautifully renovated 17th-century castle in the heart of the English countryside. Crossbasket Castle has a long and illustrious history. It contains many antiques that have been lovingly restored to their former splendor by local artisans using locally sourced materials. It also includes finely carved cornices covered in gold leaf to represent the grandeur of the era.

The Crossbasket Tower was built in the early 15th century as a jointure or dower house by the Lindsays of Dunrod. They lived in Mains Castle, which was a little older than the Crossbasket Tower at the time. After the Comyns took the land of Kilbride from King Robert the Bruce, Queen Elizabeth I gave it to John Lindsay of Dunrod, who lived there. They bought the castle from John Kincaid in the early 1800s, and they lived there for a long time.

By 1747, the Peter family owned the castle. Charles Macintosh held the castle until 1878, when he sold it to Alexander Downie, who subsequently sold it to John Cabbell. Robert Clark bought the castle from Cabbell. His son James Clark then sold the castle to George Neilson, who lived there until he died in 1922.

The trader Thomas Dunlop Findlay owned it till 1932. Restoration by local businessman Steve and Alison Reid-Timoney, his wife, saved the building from imminent demolition.

Because of where it is, Crossbasket Castle, which is almost 300 years old, is both good and not-so-good. Moreover, there are a lot of apartment complexes in the suburbs of Glasgow. So, a five-star hotel in the shape of a castle isn't the first place you'd look for one.

Moreover, the East Kilbride Expressway closely makes a faint but distinct sound when it's moving. If you're on the castle grounds, you can hear it. The good news is that the downtown business district and the airport are very close by.

With gold leaf on the ceiling and the cornice, you can expect chandeliers and tasseled draperies and wood panels, and old furniture all over the place. They also line the walls of the Baillie restaurant's dining room, where you can have an aperitif, drink tea, or eat there. The atmosphere is regal but also warm and inviting.

Crossbasket features nine luxurious rooms, each with its private bathroom. Some are huge suites, and some are elegant small doubles. A historical protector of the castle is commemorated in the name of each chamber, which is adorned classically. You may unwind in this luxurious retreat if you wish to be alone. Because they were all created by hand, they all look fantastic. They feature a unique combination of old-world charm and contemporary elegance.

The four-story bridal tower at the renovated Crossbasket was initially built as part of a castle known as Mains Castle in the 16th century. The tower chamber, which is on a hill, has a long stone staircase. It twists and turns its way up to the top level of the building. This is the place to go if you want a one-of-a-kind wedding suite.

You can also find a secluded space with soothing lighting in each en-suite bathroom. Moreover, each area has an audio and visual system to ensure that you have a good time. Beds that have the appearance of having been manufactured in the past.

There were also several chandeliers in use between 1800 and 1900. It's spacious and open, with various amenities at your disposal, such as a lounge, that you may enjoy. Full-length mirrors are pretty helpful for making sure that everything aligns perfectly.

In addition to being a self-catering option, Gate Lodge, a two-bedroom property, is also available. This is the location to stay if you want a five-star experience while still having access to all of the hotel's facilities. It's just a 3-minute walk from the castle to get there.

In addition to a large number of trees, numerous nature pathways, and a river with spectacular waterfalls, the castle grounds include a pond. Because of the hotel's accessible location, there are several things to do and see in the surrounding area. Golfing, fishing, and hiking are just a few activities that guests can enjoy in the surrounding region.

Spend the evening at the newest modern Roux fine-dining restaurant. It has a lot of glamors and excellent service from a culinary dynasty. Moreover, great French chef Albert Roux and his son Michel Roux Jr. are in charge of making the food. They use ingredients from Scotland's well-known "natural larder," but add a Roux twist to them.

A restaurant called Albert & Michel Roux Jr. is in the Baillie Room. The famous French chef Albert Roux, his son Michel Roux Jr. runs it, and a top head chef who has won awards. This restaurant makes visitors feel like they're going back in time because of the gold leaf and the rich antiques that decorate the space.

At Crossbasket Castle, have an Afternoon Tea and enjoy the peaceful setting. Choose from the in-house tea menu to enjoy the chef's finger sandwiches, fresh-baked scones, and other sweet treats.

Crossbasket Castle streamlined its facilities to make the most of its available features as a tourist destination. As a result, the hotel's staff is always on hand to help visitors with ideas for local sites, tour planning, and arrival arrangements, among other things. Also, because of the Roosevelt Ballroom, the possibility of exclusive usage.

With the fairytale backdrop, Crossbasket is a popular wedding site for many couples. Visitors will have access to an app to search menu items and other information.

This 17th-century Crossbasket Castle, which sits on the banks of the River Calder, is now a lovely site to stay for visitors. A bridal suite in a tower and just nine traditional en-suite rooms make it unique. Furthermore, two gate-house cottages and a restaurant owned by Albert and Michel Roux Jr. are among the amenities at this grown-up dream near Glasgow. 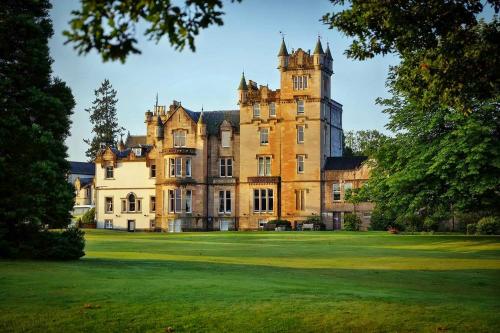 EXPLORE THIS HOTEL
From 314 USD 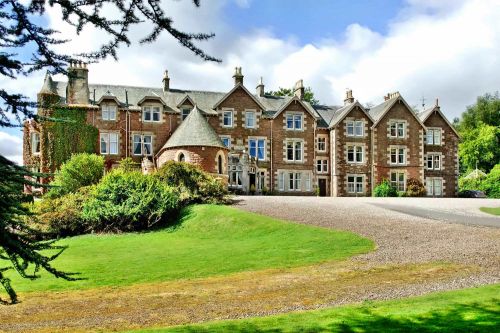 When Scottish tennis superstar Andy Murray acquired Cromlix, close to his hometown of Dunblane, it signaled not only a return to his roots but the cha...

EXPLORE THIS HOTEL
From 225 USD 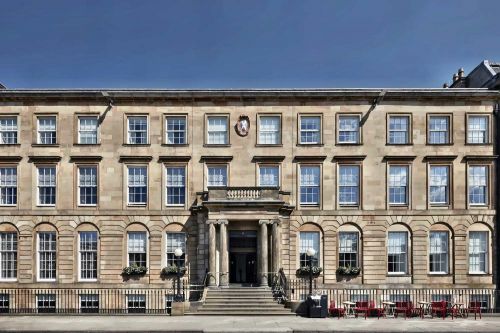 A feeling of majesty greets you as you arrive at the Kimpton Blythswood Square Hotel. It has picture-perfect private gardens and magnificent Georgian...