Rooms and Suites at Palazzo Manfredi 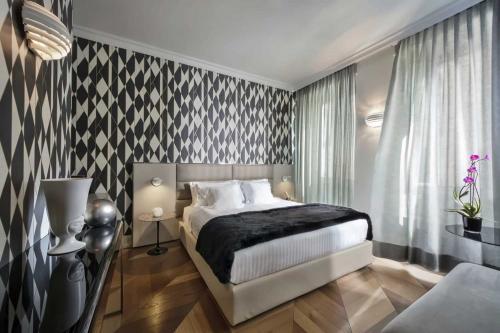 Welcoming and sophisticated, overlooking the courtyard. Rich fabrics such as velvet and leather, in natural colors that blend in the soft light of the... 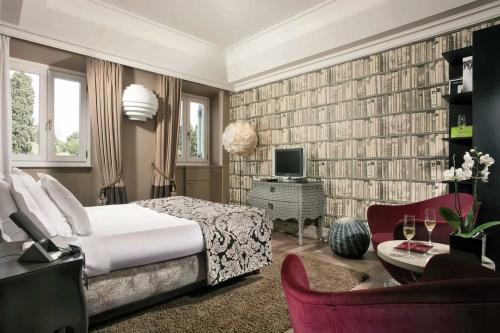 Stylish, comfortable and sophisticated, overlooking the Domus Aurea and the park of Colle Oppio. Environments surrounded by precious wallpaper and fur... 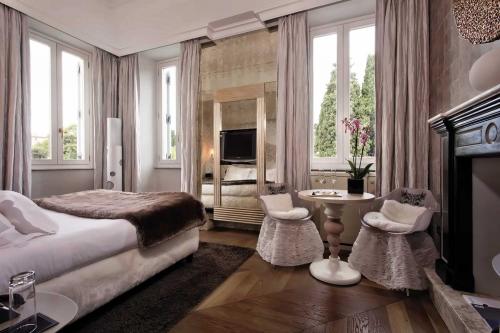 Charming setting surrounded by precious wallpaper and furnishings with a contemporary design blend with parquet flooring. The Master rooms have an unf... 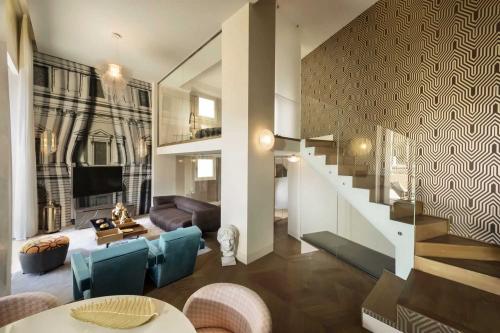 Fluid spaces, modern layout and rich in light characterize the charming J Suite with great views of the ruins of ancient Rome. The suite extends over... 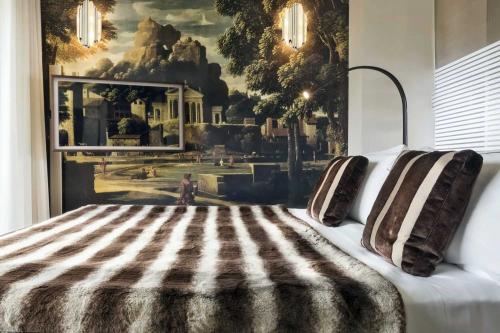 Exploring Rome with the family is unforgettable. Starting with the sumptuous Family Suite, a personalised experience awaits so that you can discover t... 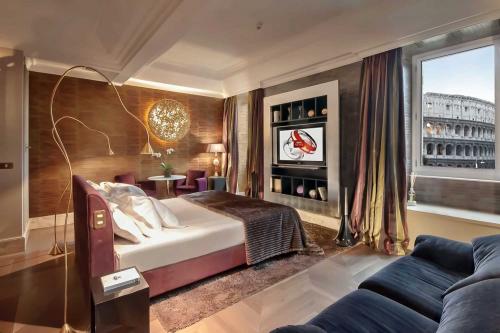 Elegant and sophisticated, overlooking the Colosseum and the Ludus Magnus,the old gym where the gladiators used to training before their battle in the... 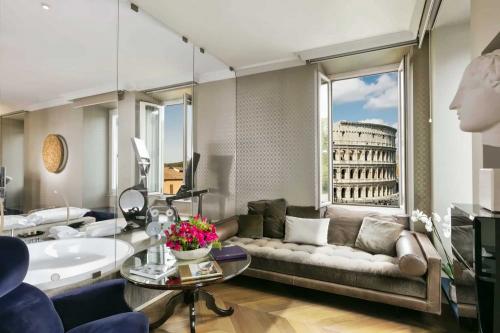 Elegant, warm, sophisticated and looking out onto the Colosseum. Sitting room and separate bedroom with king size bed, an upper level area with bath t... 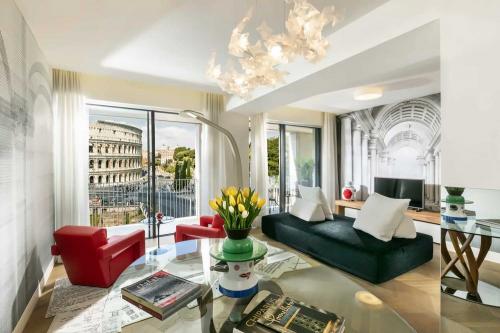 Situated on the third floor, the Grand View Gallery Suite welcome guests into an elegant and bright space of 80 square meters and consists of a one-be... 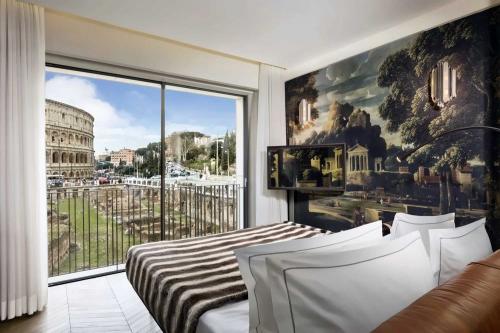 Situated on the ground floor, the Grand View Colosseum Suite of 120 square meters on two levels reveals a privileged view of the Ludus Magnus and Colo... 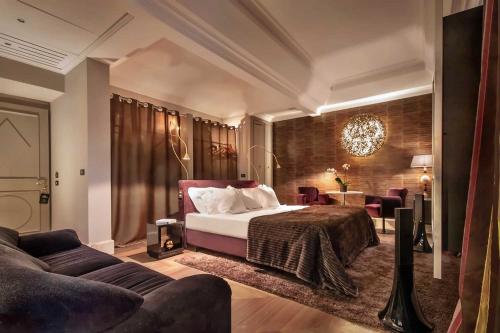 Sumptuous and soft like a mink fur on the skin. The Junior Suite is a caress overlooking the spectacle of the Colosseum and its famous gym, the Ludus...


Hotel Palazzo Manfredi is part of the Small Luxury Hotel group. It offers an elegant hideaway in the middle of what was once the capital of Rome, the eternal city. The beautiful 17th-century palace has a great view of the Colosseum, the Forum, and the Domus Aurea, as well as excellent hospitality.

Palazzo Manfredi was built on top of the Ludus Magnus ruins. Then, it was the Guidi gardens' hunting pavilion. Today, it looks good with art that dates back to the 16th century and more modern pieces. The boutique hotel is also very private. The only thing that tops it off is a meal at the hotel's Aroma restaurant. This is where the food perfectly complements the breathtaking views of ancient Rome.

The Ludus Magnus and the Colosseum are nearly next to Palazzo Manfredi. Guests can walk there in under three minutes from the hotel in the morning to avoid the crowds and enjoy a more serene atmosphere. In addition, the Colosseo Metro stop makes getting about a little easier, even though most other sights are a considerable walk away.

Additionally, guests can reach the trendy Monti quarter and Piazza Venezia in about 15 to 20 minutes walking on foot. Plus, you can reach the Pantheon, Piazza Navona, Spanish Steps, and Trevi Fountain in around 30 minutes by taxi. Commuters can expect to make at least one stop on the metro or bus to get to these locations. Palazzo Manfredi is also a short distance from both Fiumicino and Ciampino airports.

Imagine you're a Roman count who owns a townhouse that looks out over the Colosseum. You like a modern design that still has a little bit of the elegance and classical beauty that fills your 18th-century home. At the same time, you want to show off a rooftop restaurant that is one of the most romantic in Rome to your guests.

The Concierge Service is there to help you with everything you need, both during your stay and when you book your room. They want you to feel right at home from the moment you arrive. The concierge service is also unbiased and well-trained. There is no spa, but a small gym is there. However, you can ask for in-room massages. Besides, there is free Wi-Fi all over the hotel.

Prestige Rooms at the lower price points don't have views of the Colosseum. However, they have a tranquil view of the hotel's interior courtyard. In contrast to the more feminine Master Rooms, the Executive Rooms exude a strong sense of authority.

The rooms at the hotel offer an autumnal color scheme, which makes them feel a little Parisian at times. But things like the reproductions of classical busts, or the fun Palladian wallpaper in the Executive rooms, help you feel like you're in Rome. Moreover, some Master room choices have a "transparent" bathroom. There are also shower cubicles visible from the rest of the room, so be careful.

The Colosseum Suites have a large, scenic whirlpool bath and a private gym. But, you may prefer the more discreetly opulent double room Junior Suites because they are less noticeable. The most recent additions are four large suites in the next-door palazzo. This is now called the "Ludus Magnus" annex. All of them have views overlooking the Colosseum and Roman Forum.

In addition, there are five apartments for families or large groups. Keep in mind that these are a little less stylish than the hotel itself and that the closest one is a good five minutes' walk away from the Manfredi.

The rooftop Aroma restaurant looks out over the Colosseum for a truly romantic meal. You'll feel like Roman royalty as you enjoy the view and a menu of Mediterranean dishes that Michelin has praised. Rather than using tuna that has been over-farmed, Chef Giuseppe Di Lorio chooses meat and vegetables that are grown in the same area as the tuna.

The food at Restaurant Aroma, a rooftop restaurant with romantic views of the Colosseum, goes well with the view. It's clear that Chef Giuseppe Di Iorio, who was given his first Michelin star in 2015, is a master of the light, modern Mediterranean style. This shows in dishes like his pasta with monkfish, candied lemon, sun-dried tomatoes, and samphire.

The bar next door is also a great place to enjoy a sunset drink. Plus, you can keep it in mind if you're running late for breakfast.

The lobby looks and feels like a living room in your own home in Rome. It has warm leather furniture, antique maps and books, and chandeliers made of Murano glass. Moreover, the receptionist is always there to help. Freshly cut orchids also make the room smell good.

Romance and family. To get the best of both worlds at the Manfredi, book the Family Suite or one of the apartments, and hire a babysitter. Keep in mind that extra beds can only be added to Executive rooms.

You can hear the lions roar at the Colosseum from this excellent 20-room luxury hotel. With its artfully luxurious decor and stunning views from every angle, the Manfredi is one of the best hotels in the world. In Rome, the Hotel Palazzo Manfredi Small Luxury Hotels is a place where you can enjoy true luxury in the middle of the city. Everyone will be jealous of your trip photos because the hotel gives you a grand view of some of the best sights in Rome.

Throughout, the design is very well thought out. They've hired top European artists to make everything from the wallpaper to the lighting. The concierge is perfect and will do everything they can to ensure your trip is excellent in every way possible. Some of the best restaurants and bars in the city are in this hotel, as are the food and drinks. 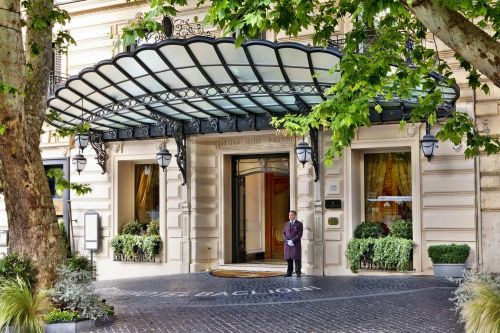 Baglioni Hotel Regina is only a short walking distance from the Borghese gardens and museum and the Spanish Steps. Moreover, the hotel was previously... 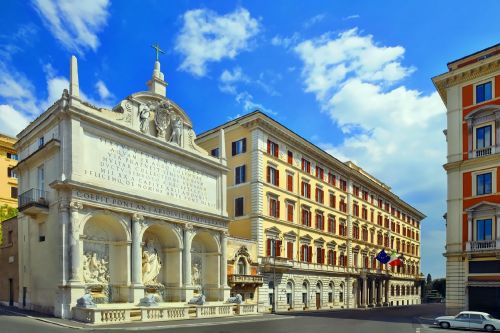 Since 1894, the St. Regis Rome hotel has been known as a building of art with historical features that attract tourists every year. It exudes sophisti...

EXPLORE THIS HOTEL
From 501 USD

Inspired by Rome's ancient temples and their timeless style, this hotel's design is studied in every detail and expresses the excellence of Made in It...