Overlooking the Palais Royal Garden, the Grand Hôtel du Palais Royal is also steps from the Louvre Museum, the Comédie Française Theater, rue Saint-Honoré, and the Tuileries Gardens. A classy neighborhood where architecture, culture, and gastronomy blend with the most exclusive boutiques. Pierre-Yves Rochon’s decor, spa, restaurant, staff trained in the tradition of luxury French hotels, and the unique location in Paris make the Grand Hôtel du Palais Royal the new address for Parisian chic.

Interior Design by Pierre Yves Rochon - The hotel is nestled in a magnificent 18th-century building, parts of which are officially designated a historical monument. Pierre-Yves Rochon has imagined an ultra-refined interior, where classic luxury and modern design meet with style. Some of the 68 rooms and suites have their own balcony with spectacular views of Paris and its monuments. As a tribute to the Palais Royal Garden, plants and freshness are the hotel's keynotes: a winter garden, a grand exotic tree in the entrance, light-colored wood, and lime green hints, the fabrics used.

Rooms & Suites - The 68 rooms, including 11 suites, are luxuriously equipped and offer guests all the services of a high-end luxury hotel. Interior designer Pierre-Yves Rochon has carefully selected colors and materials used - light-colored oak, chocolate brown and lime green or powdery pink, velvet, leather, and silk warm atmosphere chic and comfort to each of the rooms and suites. Families can be accommodated in connecting rooms or suites. Rooms adapted for people with disabilities are also available upon request.

Dining - "The Lulli" - As in a winter garden with infinite games of light. Chef Jean-Baptiste Orieux and his team are pleased to welcome you to discover a modern, seasonal and tasty cuisine. You will enjoy delightful dishes made from local and seasonal products and regularly renewed menus. In 2017 and at 35 years old, Jean-Baptiste Orieux has been appointed Executive Chef of the Grand Hotel of the Palais Royal and its restaurant Le Lulli. Jean-Baptiste is a passionate young chef who loves true taste. After starting his career in 2002 at the Lutetia (1 Michelin star at that time), he arrives with many new culinary ideas before joining the Fouquet's Barrière, where he will stay 12 years alongside the Meilleur Ouvrier of France Chef Jean-Yves Leuranguer.

The Lounge Bar - It is in a resolutely cozy atmosphere due to the atmosphere given by the marble countertop Moleanos gray and suede, Macassar ebony walls and curtains in toile de Jouy representing the scenes of the Parisian life that the team of the bar you waits every day from 11:00 am to midnight. Besides, at the Bar du Lulli, a host of favorites are offered in continuous service from 11:00 to 23:00, at lunch or dinner: croque-monsieur, salad Caesar, club sandwich, or the tasty Burger of the moment. Around a glass of wine, champagne, or a creation of the bartenders, let yourself be tempted by a plate of Ibérico Bellota Ham, cheeses, or caviar to share ...

Carita Spa - The Grand Hôtel du Palais Royal has its own exclusive spa, a large Turkish bath, fitness room with the top of the line exercise equipment, and tailor-made coaching programs. The Carita spa offers two treatment rooms (including one cabin for two persons). Junior Suite are spacious and very comfortable, including a sofa bed and a sitting room King size or twin beds and a very large bathroom. Features: F... Panoramic Suite is like a luxurious private apartment, living and dining rooms and an outstanding terrace (25 sqm) with a stunning panoramic view on t... Located on high floor, you will enjoy from your parisian balcony a lovely city view. The window door invites you to relax on the balcony with some inc... The Junior Suite, located on 5th or 6th floor, is a delicate cocoon, tempered with powder pink on more than 35 square meters 350 square feet. The Juni... 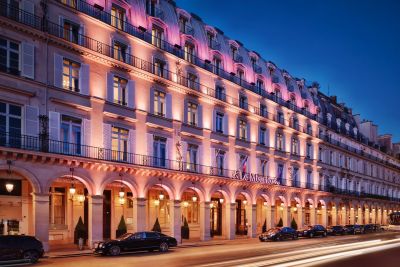 Considered the best hotel in Paris, Le Meurice is an excellent monument of Art Deco style, located in a very luxurious area. It is located opposite th...

EXPLORE THIS HOTEL
From 340 USD

Located opposite the Louvre Museum and overlooking the Tuileries Garden, the Regina Louvre hotel is close to the main Parisian monuments: the Eiffel T...

EXPLORE THIS HOTEL
From 261 USD 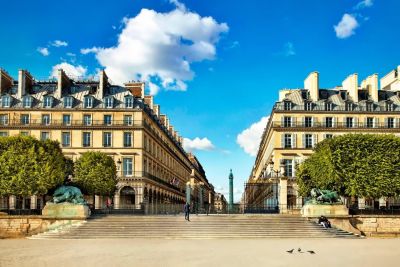 Experience Paris from the historic setting of The Westin Paris - Vendôme. Perfectly situated in the city center, across from the Tuileries Garden, bet...