Occupying Level 25 to 39 of the DUO Tower, Andaz Singapore is a lifestyle hotel brand by Hyatt Hotels Corporation that inspires fresh perspectives. The first Andaz property in Southeast Asia offers 342 guestrooms and suites, four event venues, and four dining & drinking concepts, each with stunning views of the city below. Situated at the crossroads of the Kampong Glam, Little India, Bras Basah Bugis, and Marina Bay cultural & tourism districts, Andaz Singapore aims to spark off a discovery of Singapore's rich culture and inspire guests to experience the city from new angles.

Situated near Marina Bay and at the crossroads of the Kampong Glam, Little India, and Bras Basah Bugis cultural districts, with their intimate shophouse-filled alleyways and atmospheric colors, textures, and flavors, Andaz Singapore hotel aims to spark off a sense of discovery of the rich culture of Singapore, and inspire guests to experience the city through fresh perspectives. Andaz Singapore is one of Singapore's best hotels and your top choice for a hotel in Bugis.

An all-day dining venue, Alley on 25 encompasses seven shop-house inspired venues, including 2 bars and 5 restaurants - each specializing in 1 food preparation method. Guests might start with a platter of barbecued snacks from Smoke & Pepper, followed with a steaming bowl of noodles at Auntie’s Wok and Steam, then finishing off with a refreshing shaved-ice dessert from Icehaus and a creative cocktail from Bar Square.

Restaurants & Bars - "665°F" - Take in Singapore's skyline from Level 38 at 665°F, a premium steakhouse specializing in prime cuts and sustainable seafood. "Alley on 25" - Conceived as the culinary hub of Andaz Singapore, Alley on 25 is a multi-cuisine, all-day dining venue, which recreates the fluid and spontaneous experience of Singapore street dining in the sky. "Auntie’s Wok and Steam" - An ode to Singapore's Zi char food culture, Auntie’s Wok and Steam serves up Chinese classics and Singaporean favorites prepared just like the way it’s done at zi char restaurants in Singapore. A Hokkien (Southern Chinese dialect) expression that translates to “cook and fry,” zi char is a term used to describe home-cooked Chinese food meant for sharing.

"Bar Square" - Located on Level 25 of Andaz Singapore, Bar Square offers a backdrop of dramatic sunsets with servings of Singapore-inspired cocktails. Decked out with statement communal bar counters, Bar Square invites guests to come up close and personal with the mixologists and explore the many Singapore tastes with localized infusions and tipples. "Mr. Stork" - Nestled at the rooftop on Level 39, Mr Stork is a destination bar providing 360-degree views of the city. Named after the white and long-legged birds, which are often viewed as a good omen, Mr Stork houses ten teepee huts and relaxed seating set amid lush tropical landscaping to enjoy the breathtaking views best. "Teppan Chef's Table" - A private chef’s table experience. Up-close-and-personal culinary action over a teppanyaki communal table. Menu changes according to seasonality.

Inspired by the long-legged, long-necked wading bird - often viewed as a good omen - which builds large nests on the tops of trees and buildings, Mr Stork will house ten teepee huts set amid a lush oasis. A premium steakhouse with a blend of brasserie fair, reminiscent of a classic tailor-shop, while showcasing the Singapore skyline's stunning views. Named after its wood-fired oven and grill temperature, 665°F is a dining experience specializing in gourmet meat and sustainable seafood.

Rooms and Suites at Andaz Singapore Luxuriate in this 114 sq m (1,227 sq ft) guestroom with a king-size bed, a day bed and floor-to-ceiling windows framing stunning views of Singapore’s... Relax in this 38 sq m (409 sq ft) guestroom with a king-size bed, a day bed and floor-to-ceiling windows framing stunning views of the harbor or Singa... Relax in this 42 sq m (452 sq ft) contemporary guestroom with a king-size bed and floor-to-ceiling windows framing stunning views of the harbor or Sin... Luxuriate in this 152 sq m (1,636 sq ft) guestroom with a king-size bed, a day bed and floor-to-ceiling windows framing stunning views of Singapore’s... Relax in this 42 sq m (452 sq ft) guestroom with a king-size bed, a day bed and floor-to-ceiling windows framing stunning views of the bay area. Ameni... 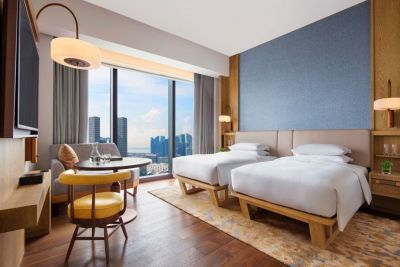 No stay in the Lion City would be complete without a visit to this iconic hotel. Shortly following its opening in 1887, Raffles was seen as a beacon a...

EXPLORE THIS HOTEL
From 257 USD 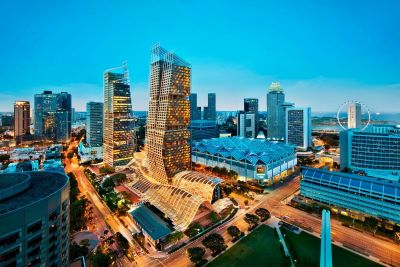 EXPLORE THIS HOTEL
From 170 USD 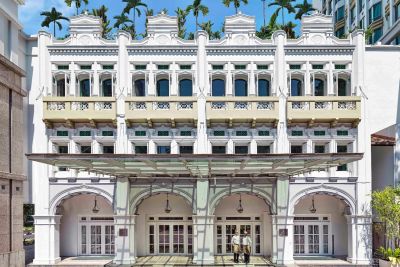