Book the The Leela Palace New Delhi with VIP Benefits

Rooms and Suites at The Leela Palace New Delhi 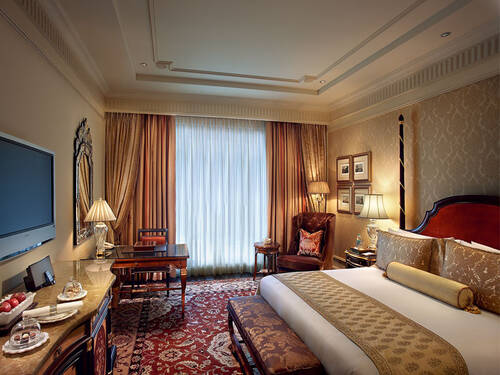 At about 552 sq ft (51 sq mt) these may be the smallest rooms in the hotel, but rest assured these are larger than their counterparts across the city.... 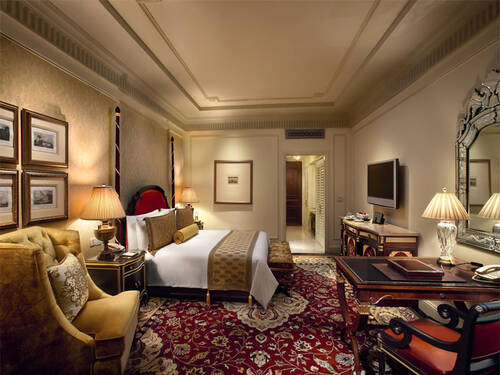 Those who like to contemplate and act upon the larger issues of life, this room gives you a space to sit back and do just that. Take a seat in the spa... 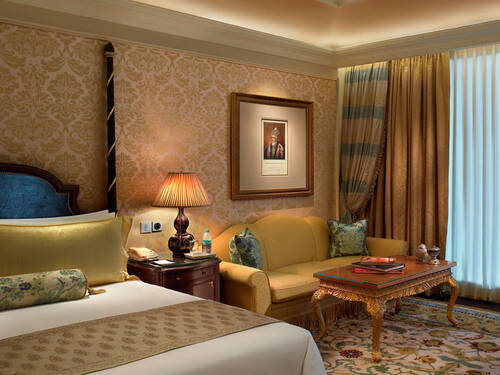 Bright and well-ventilated to let in sunshine and natural light, these rooms, which are located on the seventh floor, offer the most serene views of t... 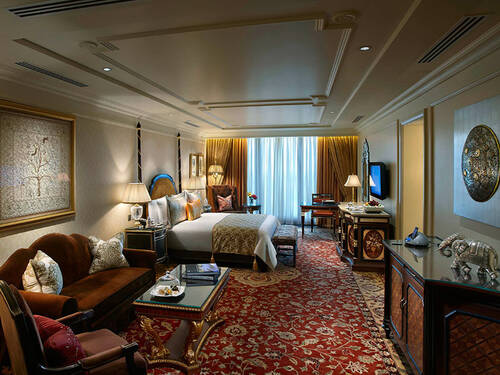 True to its name, this suite is a royal in design and welcoming in all its splendid offerings. An inviting view of the gardens adds to the allure of t... 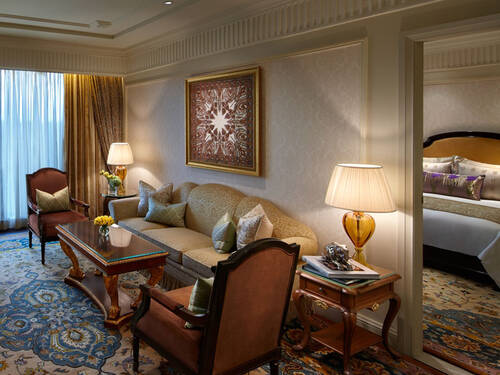 This two-bay suite is elegant and spacious- offering a living room, a bedroom with a king bed and a bathroom. Amenities present in the room include a... 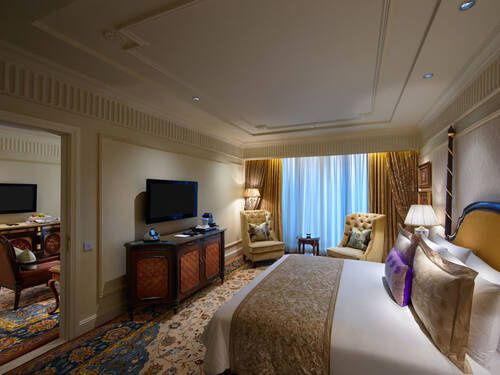 Plush, regal and opulent, this spacious suite is 970 sq ft (90 sq mt) in size. It includes a lounge area, separate bedroom with a king bed and a luxur... 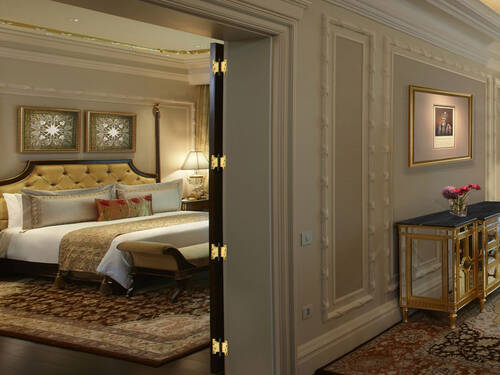 Enjoy a feel of the royal era in this suite which is equipped with every conceivable modern-day luxuries. At 1,520 sq ft (141 sq mt) in size, the Mah... 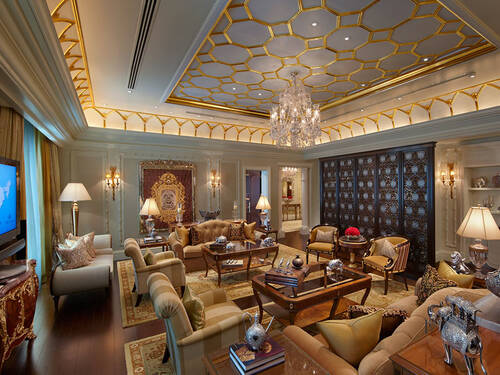 An epitome of uber luxury, spanning over 4,800 sq ft (446 sq mt), the design and décor of the suite personifies the palatial grandeur of the royal her... 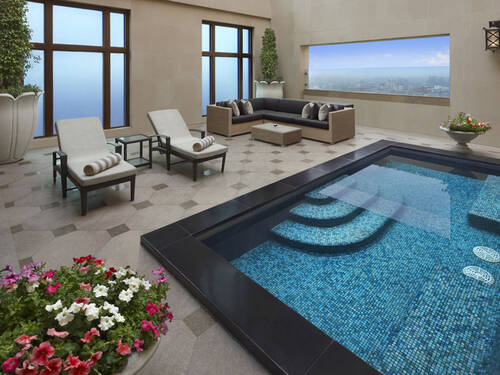 Articulating the grand Indian theme of floor-to-ceiling columns and regal arches, this two-bay suite located on the ninth floor of the hotel is a luxu... 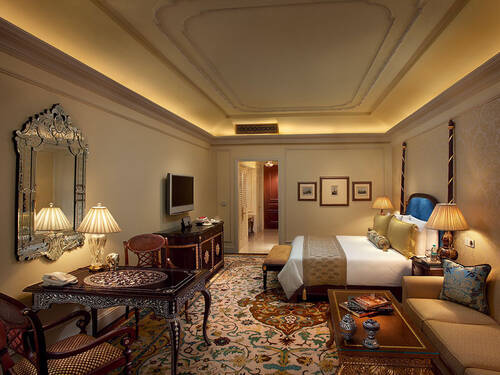 Arrive at the modern day palace with the complimentary airport transfers through the hotel’s limousine service. Stay at the lavishly appointed Royal C... 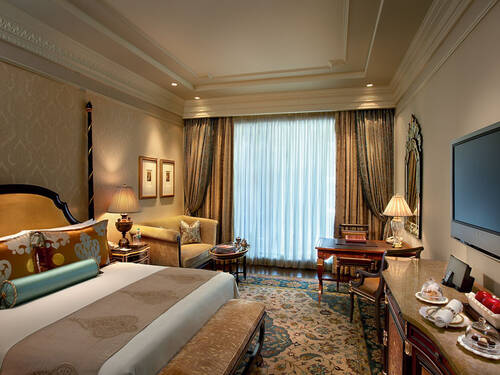 Those who like to contemplate and act upon the larger issues of life, this room gives you a space to sit back and do just that. Take a seat in the spa...

The Leela Palace New Delhi stands majestically at Chanakyapuri, close to the Diplomatic Enclave, Rashtrapati Bhavan, Prime Minister’s residence, the Secretariat leading Business Districts and historical monuments, making it a perfect choice for discerning business and leisure travelers. The Leela Palace New Delhi represents the magnificent architecture, grace, and elegance of Lutyen’s Delhi. The hotel building has been L.E.E.D. Platinum certification. It provides the luxury of oversized guestrooms and suites of 550 sq. ft and above, equipped with the latest technology. It has several uber-chic restaurants and an exclusive Spa by ESPA. The hotel has redefined international benchmarks of luxury hospitality. It has been conferred with innumerable awards and accolades, including being in the Top 4 Best of the Best Hotels in the World by Robb Report in 2012.

Ensconce yourself in the lap of luxury at The Leela Palace New Delhi, located in an ultra-luxe address in the heart of the capital’s prestigious diplomatic enclave. The modern palace hotel with 254 guest rooms is reputed for its distinctive Lutyen style of architecture, luxurious large sized rooms of 550 sq. ft., fine-dining concepts, including Le Cirque and Megu of New York fame, an expensive spa, and a luxury lifestyle boutique called Amalya.

Dining - The Qube (all-day dining), Jamavar (signature Indian restaurant), Megu (Japanese restaurant), Le Cirque (fine-dining Franco Italian restaurant), The Library Bar, and The Lobby Lounge. Cuisine - Best known for its Northwest Frontier and Mughal cuisines, the city is a melting pot of cuisines. Satiate your palate with not only authentic North Eastern and South Indian cuisines but also Italian, French and Japanese treats. In addition to luxury hotels in New Delhi dishing out gastronomic treats, the roadside stalls serve the best chaats. Sample the famed Burra kebabs and tandoori kebabs. Eat your heart out at the Dilli Haat stalls, try the soft gulab jamuns and crispy jalebis. You may also request the Chef at The Leela Palace New Delhi to whip up what you’re craving. Let us indulge you.

Spa ESPA, with varied spa options and a Salon - Infinity Swimming Pool, the only terrace pool in the city, Internet Access: Complimentary for Resident Guest. "Indulgent Experiences" - Invite yourself to an indulgent experience, and head to the spa, where trained masseuses will help you get rid of your exhaustion. Give in to rejuvenating your mind, body, and soul. Or engage in a one-on-one with the Indian master chef, in a personalized cooking session, and discover the secrets of royal Indian cuisine. Or would you prefer a bake session? Then, set aside time to rediscover the essence of who you are. Book a rejuvenating yoga session at ESPA or a private session in the serenity of the spa’s terrace

City Information - New Delhi sizzles with a touch of British Raj, sparkling in Lutyen’s Delhi, in spacious green avenues and majestic government buildings. Modernism surfaces in the contemporary houses, malls, and luxury hotels there. High-powered, classic, and cosmopolitan, the country's capital stands as a fine example of heritage co-existing with urban aspirations. The city mainly experiences five seasons, summer, spring, monsoon, autumn, and winter. One can expect extreme, sweltering summers and freezing winters. The mercury rises to 45°C between May and June. It gets cooler from November to January, where the daytime temperature falls to about 15°C and night temperatures can reach under 5°C. Experience monsoon between July and mid-September. Best time to visit New Delhi-Come October or early March, the winter months, the city is at its pleasant best with a temperature of around 20°C. The recommended clothing here varies depending upon the season. During summer, wear full-sleeved cotton clothes and sunscreen. In winters, heavy woolens, mufflers, gloves, and the rains, an umbrella comes handy.

Art and Culture - Take a tour of the numerous museums and learn about Delhi's unique history. Visit the Archaeological Museum, the Indian War Memorial Museum, or the National Gallery of Modern Art. Go on a shopping spree to the 300-year-old marketplace, Chandni Chowk. Lajpat Nagar, Dilli Haat, Sarojini Market, Greater Kailash, and Karol Bagh markets offer some great bargains. Head to Select Citywalk Mall at Saket for luxury shopping. Kids can rejoice at the Children’s Park at the India Gate, watch the sound and light show at the Purana Quila, and perform at the Kingdom of Dreams in Gurgaon.

Sightseeing - Historically, The British made Delhi the Indian capital in 1911, replacing Kolkata from the top spot. Delhi is believed to contain the remnants of at least 11 cities, including Indraprastha, from the Mahabharata. Only eight cities, Qila Rai Pithora, Mehrauli, Siri, Tughlaqabad, Ferozabad, Dinpanah, and Shahjahanabad, have been documented. Being steeped in history, there are many places to visit in New Delhi. The city is a treat for anyone who wishes to explore tourist attractions in New Delhi, modern and ancient. Find a spiritual connection in the Humayun’s Tomb or the Hazrat Nizamuddin Dargah. Feast on the stories of power struggle embedded in the walls of Purana Quila, the massive sandstone fort from the Mughal Era. Walk around the Old City, take in the splendor of Lodhi Gardens, and walk around the Qutub Minar complex ruins. Then, head to the Jama Masjid, India’s largest mosque with a capacity to hold 25,000 people. 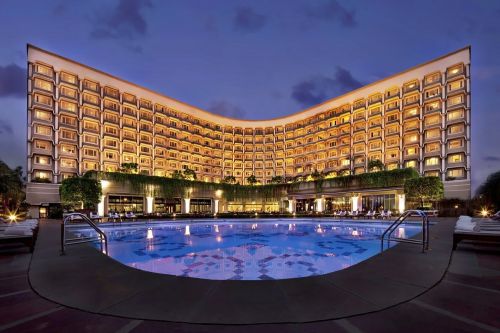 The luxurious Taj Palace New Delhi is spread over six acres of lush gardens in the heart of India's capital city. It is an oasis of calm while still i...

EXPLORE THIS HOTEL
From 284 USD 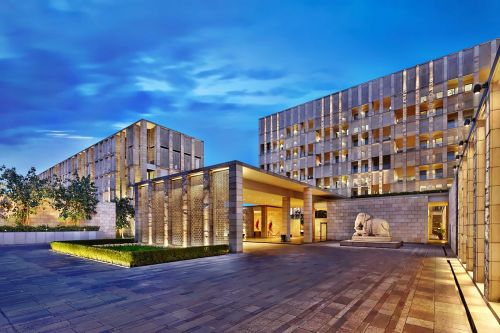 The Lodhi ethos is a simple and easy luxury. It is also an ethos of contrasts from the dynamic and vibrant atmosphere in the restaurants, courtyards,...

EXPLORE THIS HOTEL
From 252 USD 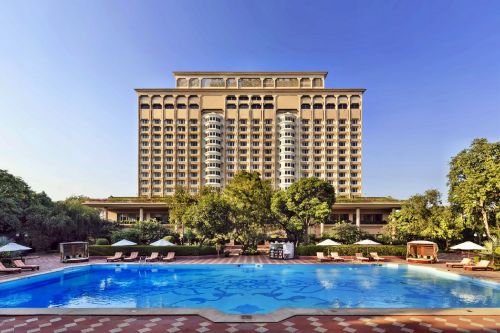 At the heart of New Delhi lies, arguably, the most distinguished address in India's capital. On Number One Mansingh Road stands a tribute to timeless...