Deluxe Suites either offer a combined bedroom and living area, or a separate bedroom. They overlook established indigenous trees in formal gardens. Co...

The Imperials Suite’s three pavilions surround a tranquil private courtyard and include a bedroom, spacious living areas and unique features such as a...

The Family Suite offers two bedrooms with en suite bathrooms by combining a Suite and a Guestroom. Suite with king-size bed, Guestroom with twin beds,...

Situated within the same private south-facing pavilion with a large shared living area, the two-bedroom Deluxe Pavilion is composed of two Deluxe Suit...

Aman Summer Palace is housed in a series of heritage dwellings dating back over a century. She provides guests unparalleled access to four UNESCO World Heritage Sites, including the Summer Palace, the Forbidden City, the Great Wall, and the Temple of Heaven. The original complex was used by guests of the Summer Palace, awaiting an audience with Empress Dowager Cixi.

Rooms and suites reflect traditional Chinese architecture and celebrate the courtyard style of the Summer Palace with a dignified ambiance. While every modern comfort has been provided, the design embraces Imperial Chinese layouts, materials, and fabrics.

Beijing offers a variety of accommodation that pays homage to the summer Palace's traditional architecture, celebrating its courtyard architectural style. Suites surround an internal courtyard featuring an intricate latticework of pathways separating formal gardens and trees. The aesthetic references draw upon traditional materials and the architecture and design of the Ming Dynasty period. For example, floors are finished in Jin clay tiles, polished to achieve a deep luster. The ceilings are mostly open to exposed wooden roof beams and structural columns.

Simple and redolent of the past, the Rooms and Suites feature traditional wooden screens and bamboo blinds, creating a vague sense of peeking through the veil of time to the romance of another era. Aman at Summer Palace, Beijing, offers several types of accommodation. Suites surround an internal courtyard crisscrossed by stately pathways separating formal gardens and are shaded by bamboo and indigenous trees.

Aesthetic references draw upon the region and the Imperial period, and furniture and accessories are crafted from traditional materials. For example, floors are finished in Jin clay tiles polished to a deep luster, and ceilings are primarily open to exposed wooden roof beams and structural columns. Simple, elegant, and redolent of the past, rooms and suites also feature traditional wooden screens and bamboo blinds, creating a vague sense of peeking through the veil of time to the romance of another era.

Restaurants are open to guests and non-residents. Spread across the heritage-imbued grounds of Aman Summer Palace, the restaurants serve cuisine from across the continent and globe: the Ming Dynasty-inspired Chinese Restaurant features Cantonese cuisine, as well as Imperial dishes, the Japanese Restaurant's set menus offer French-Japanese fusion, and the Grill is home to prime cuts of meat cooked with western techniques. Meals can also be arranged in private dining rooms.

Spread across two underground levels, the 5,000-square-metre spa is a sanctuary for body and mind. In the nine double treatment rooms, therapies that draw on Imperial traditions range from massages and scrubs to moxibustion and acupuncture. A Pilates and yoga studio is naturally lit with skylights, and the facilities also include a 25-meter pool, large gym, and two squash courts. Separate male and female areas incorporate steam and sauna rooms, a hot Jacuzzi, and cold plunge pools.

EXPLORE THIS HOTEL
From 216 USD 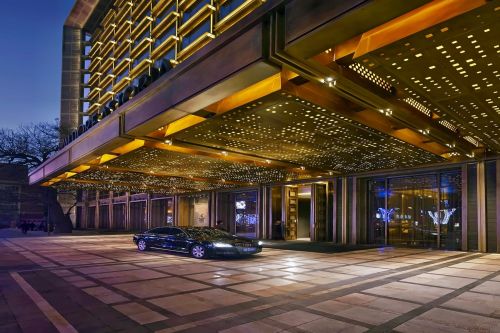 Ming-inspired architecture in Wangfujing. Find us moments from Wangfujing Street's pedestrian shopping. The Forbidden City and Tiananmen Square are wi...

EXPLORE THIS HOTEL
From 355 USD

THE PUXUAN HOTEL AND SPA

The PuXuan Hotel and Spa is uniquely poised as a new, modernist state-of-the-art masterpiece. The neighborhood's ancestral heritage has been cleverly...