A Historic Destination By The Lake. Private residence, hidden from view since 1900, the Manoir Hovey is a 5-star Relais & Châteaux property, which critics have described as the “quintessence of Anglo-Saxon vacationing” celebrating “a Quebec art de vivre, anthem epicurean and playful with nature, local products and conviviality. Nestled on the shores of Lake Massawippi, a few minutes from North Hatley, one of the most picturesque villages in Quebec, Manoir Hovey is located in the heart of the Eastern Townships, in the middle of breathtaking landscapes composed of mountains and meadows, rivers and crystal clear lakes. This superb region is the ideal choice for exploring the beautiful province in all its authenticity.

This 5-star Relais & Chateaux historic manor nestles on 35 acres of beautifully landscaped gardens and birch forest along Lake Massawippi near North Hatley, one of Quebec's most picturesque villages. The Manor is only a 75-minute drive along the scenic Routes des Vins from Montreal. Built-in 1899 and modeled after George Washington’s Mount Vernon home with huge wraparound verandas and white pillars, this family-owned country house creatively combines old-world charm and service with contemporary comforts and luxury.

The Manoir Hovey will appeal to visitors who yearn for simpler times when a vacation called for a charming country house on a lake with lots of fresh air and fabulous world-renowned food. In this enchanting setting, the hotel offers thirty-seven elegantly appointed lakeside rooms and suites supplemented by panoramic vistas of gardens, lakes, and hills all around. Fine dining Le Hatley Restaurant offers Chef Francis Wolf’s ambitious terroir-driven Quebec cuisine. At the same time, Le Tap Room serves a more casual bistro experience in a warm setting with a sumptuous summer terrace. This is the land of the maple leaf, and the autumn colors are dazzling. Many recreational facilities are available right on-site in all seasons and are included in the rates, such as canoes/kayaks, tennis courts, bicycles, swimming pools, snowshoeing, and ice skating. Spa services onsite, including massages, facials, and nearby spas, offer a traditional Nordic experience.

Rooms & Suites - The Manoir Hovey property spans over 30 wooded acres and English gardens. The estate offers an idyllic location with more than 500 meters on the shores of the majestic Lake Massawippi and its 45 kilometers of coastline. The majority of the 36 rooms and suites have a panoramic view of the lake and offer comfort in a classic or contemporary style decor. All rooms are equipped with a Nespresso coffee maker, dressing gowns, Frette towels, L'Occitane bath products, and a flat-screen TV. Most come with a goose down duvet and offer a combination of a fireplace, private balcony, and/or whirlpool tub. High-speed internet is complimentary in all of the rooms and on the property. No resort fees will be charged, and many free activities are available on site.

Refined Cuisine - Le Hatley Restaurant at Manoir Hovey reflects the chef's passion for the region's history, its abundance, and its natural beauty. Inspired by his Franco-Canadian roots, chef Alexandre Vachon offers refined cuisine inspired by nature that pays homage to his origins, to the land, and the region's producers. As stated by the Chef - ''The origin of the products is important. We are curious. We are gatherers, cultivated from seeds, have a relationship with the producers and the land. We are respectful and patient. We sublimate nature to serve it at your table. The quality of the products is an integral part of the recipe. '' Chef Alexandre Vachon's culinary philosophy celebrates the profusion of ingredients found in the rivers, lakes, forests and fields of the region''.

Spring: from the tree to the table. ''Birch'' - The abundance of birch trees at Manoir Hovey makes it ideal for birch syrup and vinegar production. The Hatley is probably the only restaurant in Canada that engages in this practice. Showcasing the abundance of Quebec's province, cultivating, picking, selecting only what is necessary, working closely with local farms and producers, a meal at Hatley is a true culinary experience. Being part of a sustainable approach is daily attention paid by the Chef and his team. The menus are composed with a strict and passionate respect for what each season offers, leaving the smallest possible imprint on the environment.

''Le Tap Room'' - View all fonts in this project. Bistro with local and seasonal flavors, Le Tap Room, welcomes you all year round in a friendly and relaxed atmosphere. Its menu offers simple and refined dishes and snacks and "pub" options such as the famous Abénaki poutine. In summer, a terrace overlooking the English gardens and the lake allows you to have lunch outside. Inside the restaurant, a warm decor with its 10,000-brick fireplace invites you to relax while contemplating the objects collected over time that adorn the walls and tell the place's story.

Care & Well-Being - A haven of peace, just for you! There is no better way to let go of stress than with a relaxing massage. The certified massage therapists at Manoir Hovey offer various services to meet all your needs and preferences, from a classic massage to other more treatments such as lymphatic drainage or reflexology.

The History - At The Beginning - Many of the first settlers who settled in the area around North Hatley were United Empire Loyalists, largely farmers, who had left New England after the Declaration of Independence in 1776. Several fine farms from this period still exist in the village. The Hovey Manor is named after one of the most illustrious of these settlers, Captain Ebenezer Hovey, to whom the British Crown had granted in 1785 a large plot of land on the lake's shore opposite the inn. However, the village of North Hatley owes its architectural wealth in large part to its first vacationers - aristocrats, industrialists, and landowners - who came from the South after the Civil War. Preferring to go further north to avoid New England and importing their comfortable way of life, their residences often numbered more than fifteen rooms. In 1900, Henry Atkinson, owner of the Atlanta power grid, built “The Birches,” a vast estate with stables, stables, servants' quarters, golf course. Its architecture, with vast verandas and white columns, was inspired by that of George Washington's house at Mount Vernon in Virginia.

The Beginnings of the Manor as an Inn - The Atkinson family stopped coming to North Hatley in the 1940s, and their home changed hands several times before being converted, in 1950, into a prestigious inn by its new owner, Robert Brown, a fresh Montrealer who graduated from the hotel school. Cornell. The current innkeepers, Kathryn and Stephen Stafford, bought the inn from him in 1979. All improvements have always been made to preserve the character and ambiance of this unique place. Today, the 36 rooms of the Manor are divided between what was once the main house, the staff house, the cooler, the pumping station, and the caretaker's residence. A good number of antiques are incorporated into it, mostly from the period by Mr. Atkinson himself. Several books in the library belonged to his family. The Tap Room, which once housed the entire collection of Atkinson family carriages, has a 10,000-brick fireplace. One of the 26 homes of all sizes present in the Manor. On an old shelf at the reception, you can see the famous haunted clock featured as a curiosity on the TV show "Ripley's Believe It or Not." This cathedral-style clock no longer functions, but it occasionally begins to mysteriously chime at the mention of "Plumley Le Baron," one of North Hatley's pioneers who, according to legend, wore a wildcat coat in summer.

Rooms and Suites at Manoir Hovey 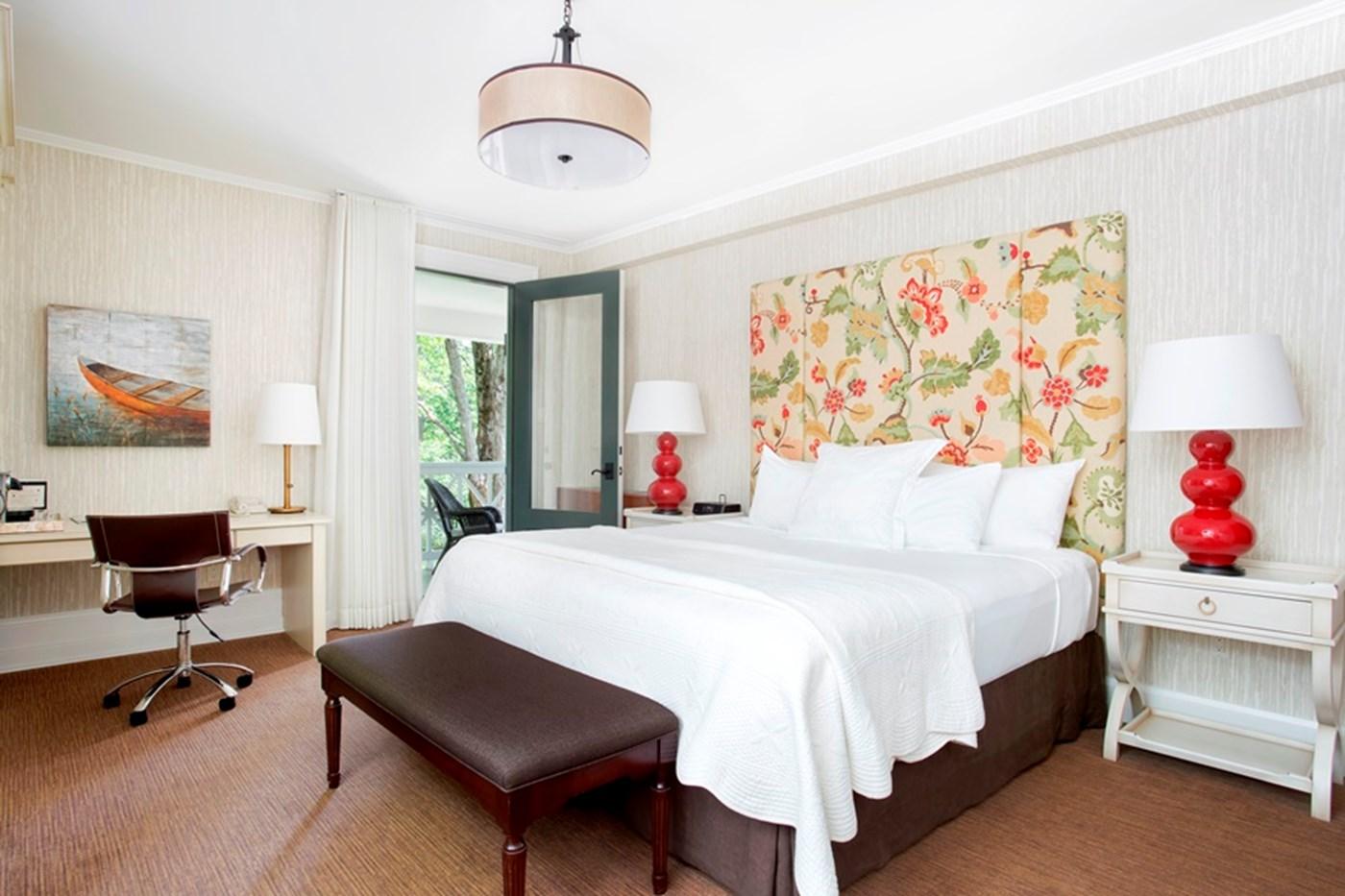 Larger than classic rooms, superior rooms each uniquely decorated offer a queen size bed, many have delightful views of the gardens and lake and offer... 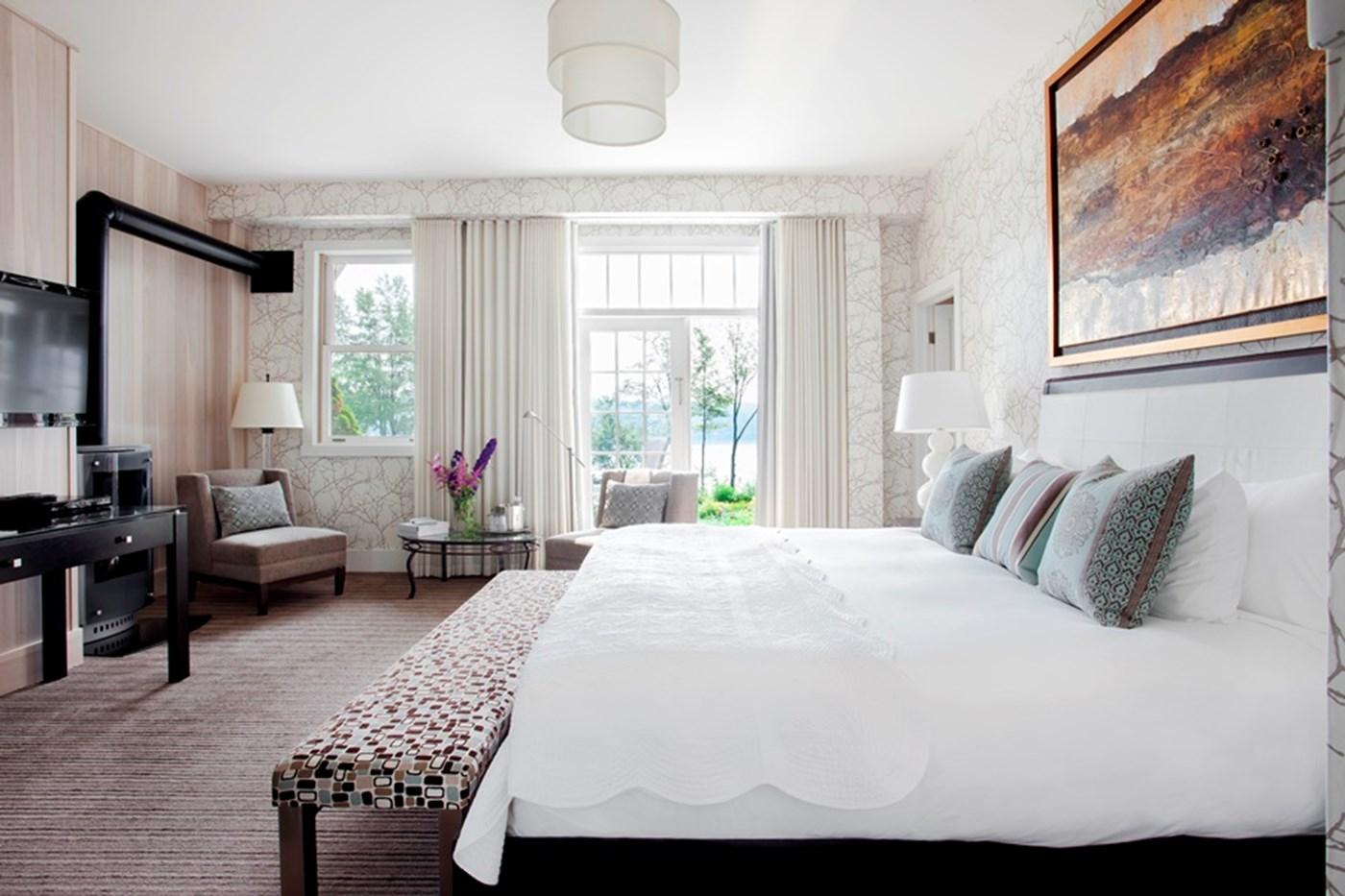 The Luxury rooms provide gracious and refined space and feature a King-size bed, a Private balcony or patio, panoramic views of the lake and gardens,... 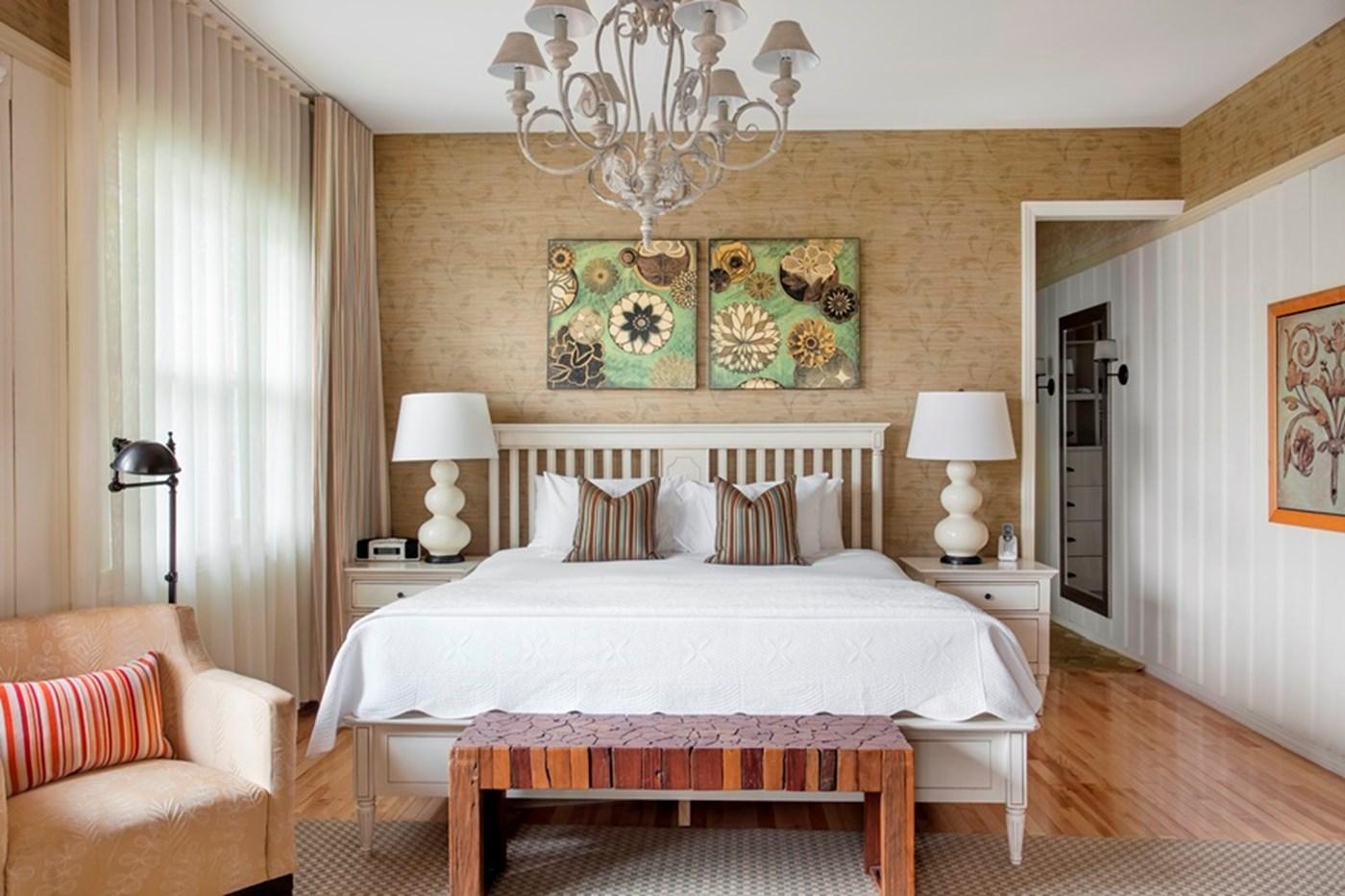 The Montcalm Suite exudes refinement, peace and serenity. The colour palette of the suite presents shades of green, white and grey which complement th... 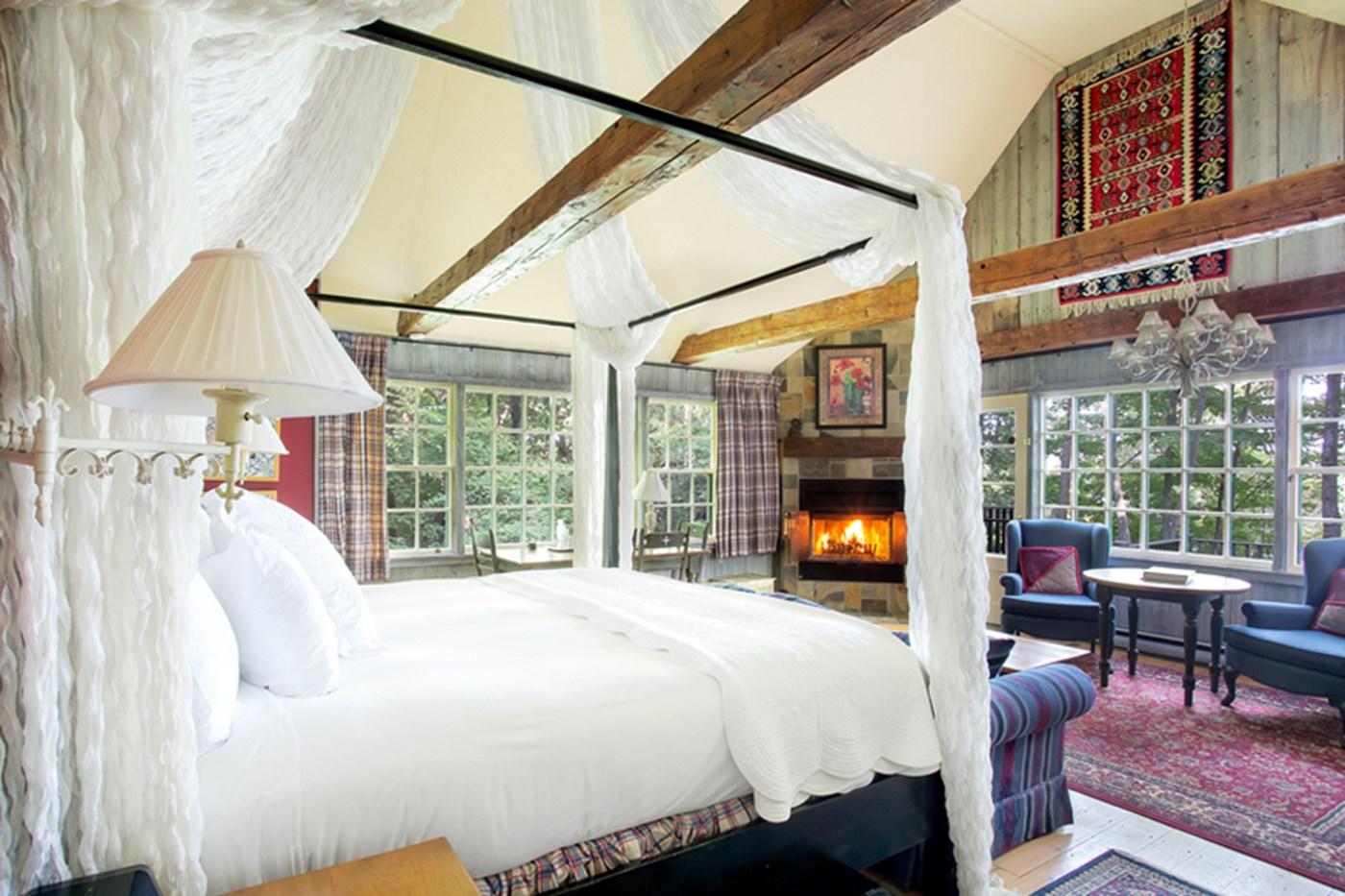 Two luxurious suites tastefully furnished in a chalet perched on the small cliff overlooking the Manor. Summer and winter, it's easy to be charmed. Th... 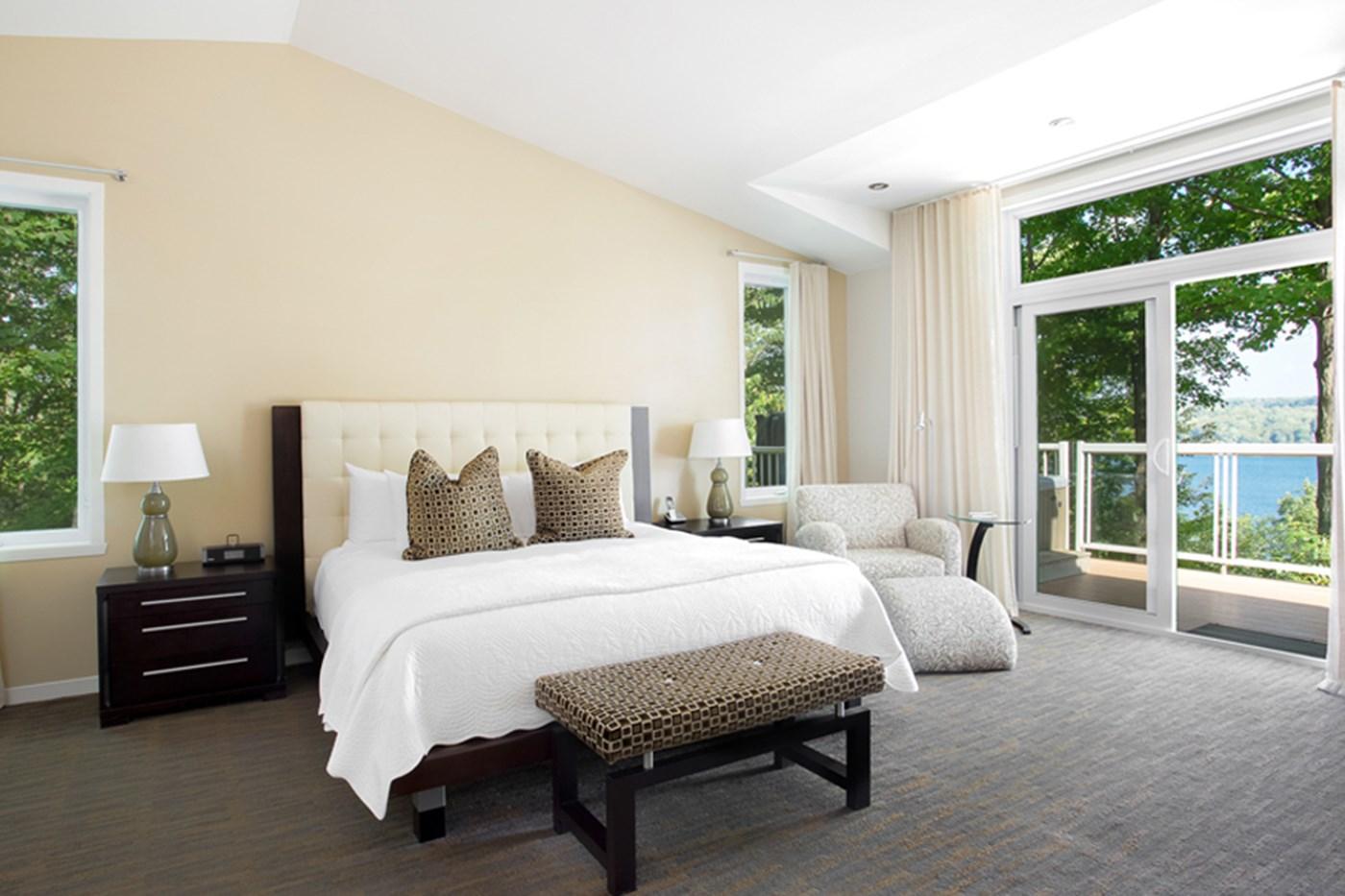 This spacious one bedroom suite (1200 sq. ft.) shares the ridge with the Heron Suite and offers the same sweeping panoramic lake views and spacious la... 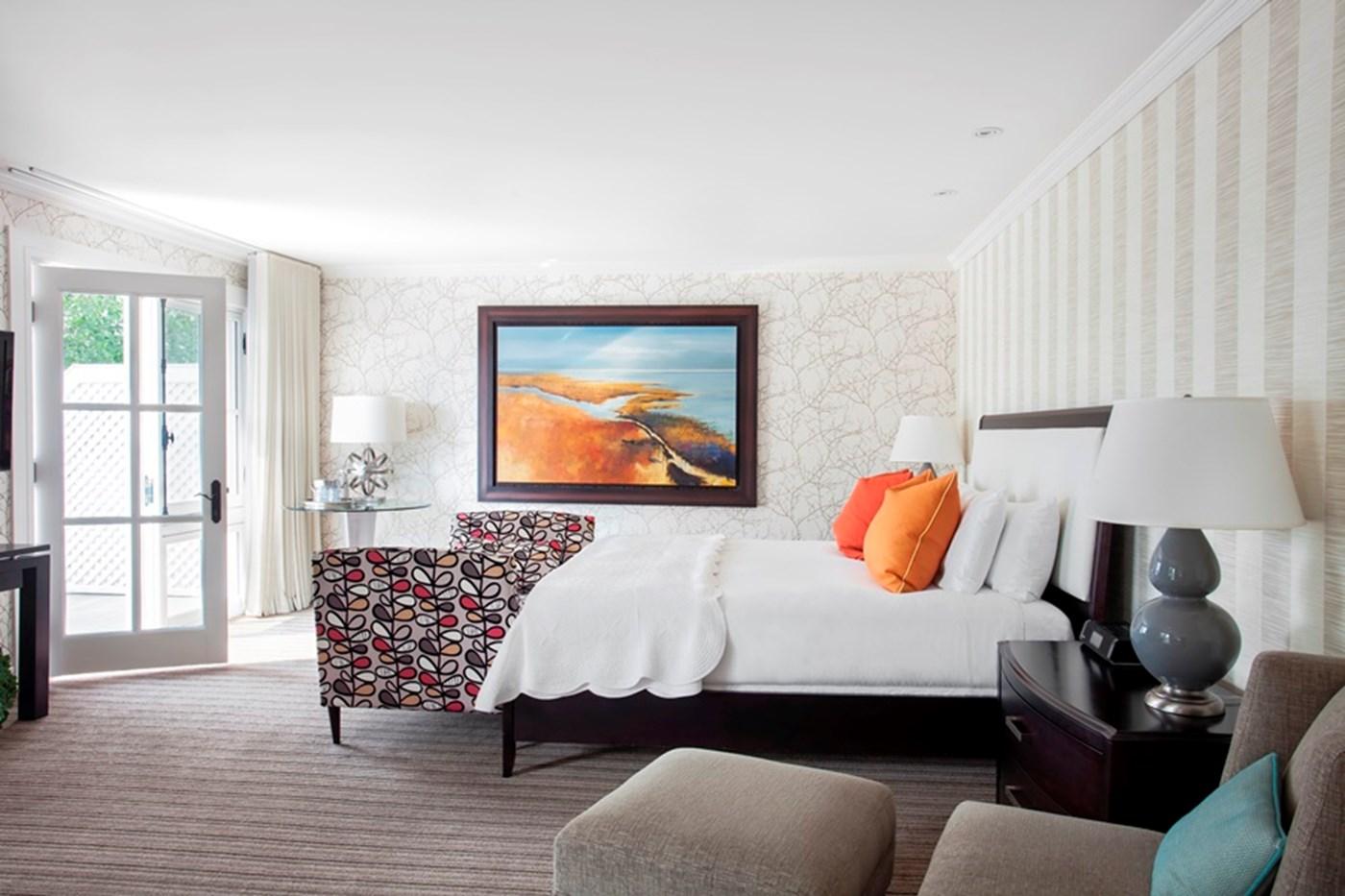 Completed in May 2011, the Massawippi Suite features 500 ft. of contemporary luxury. This is the only suite located in the Manor House. This suite fea... 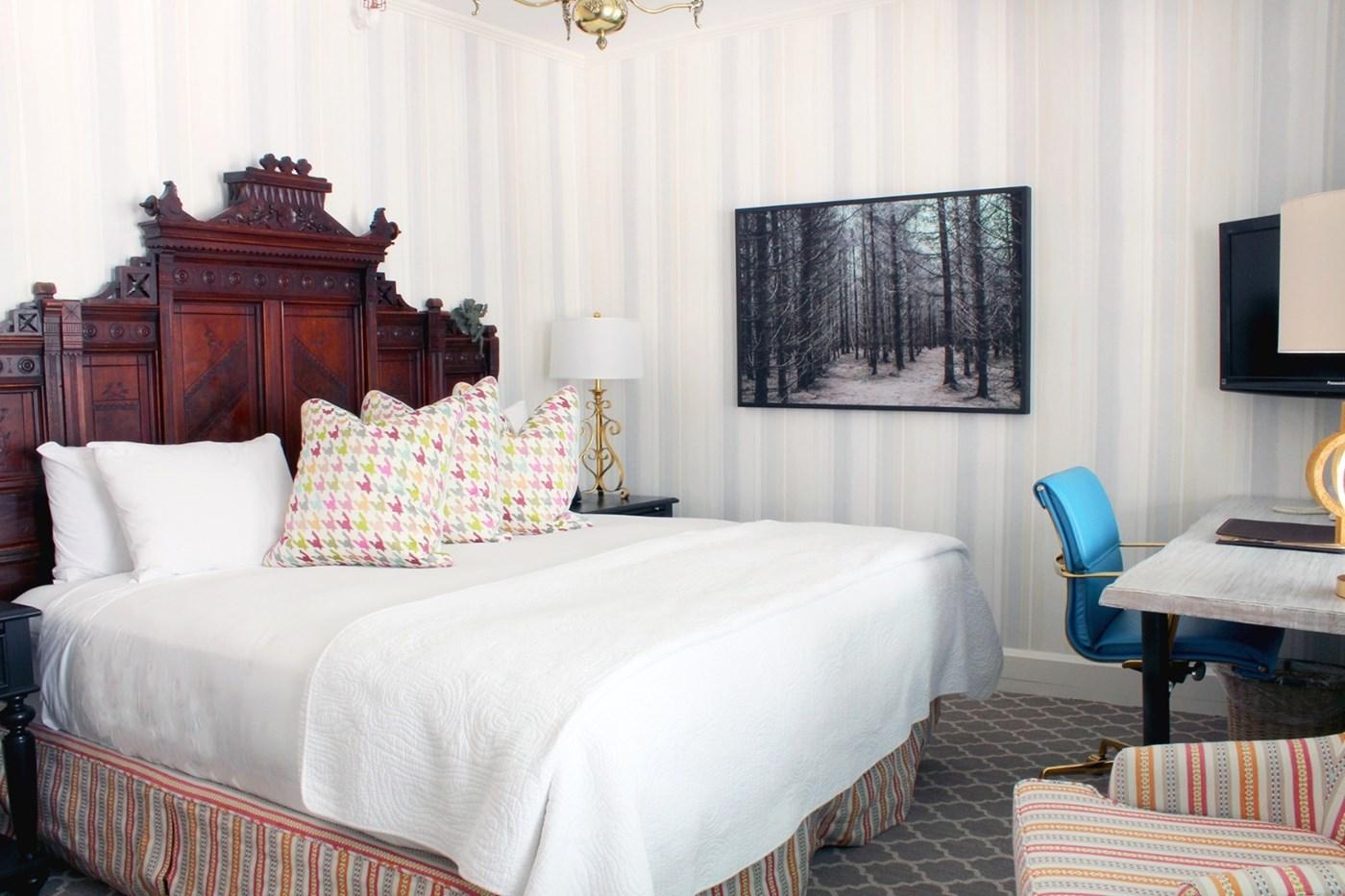 The new suite located in the main building! A rural character and an original concept make it a real favourite for a romantic getaway. Its name refers... 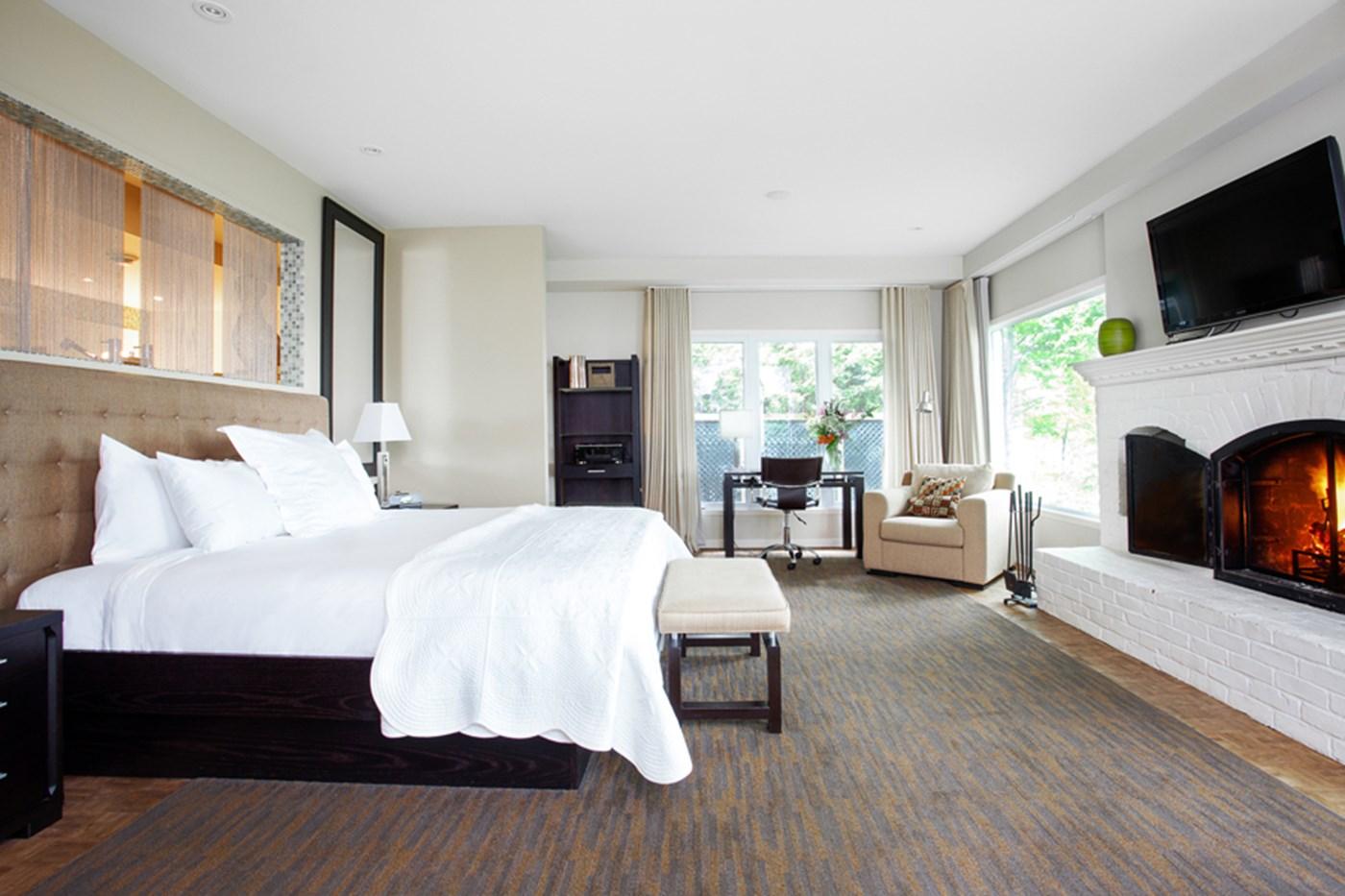 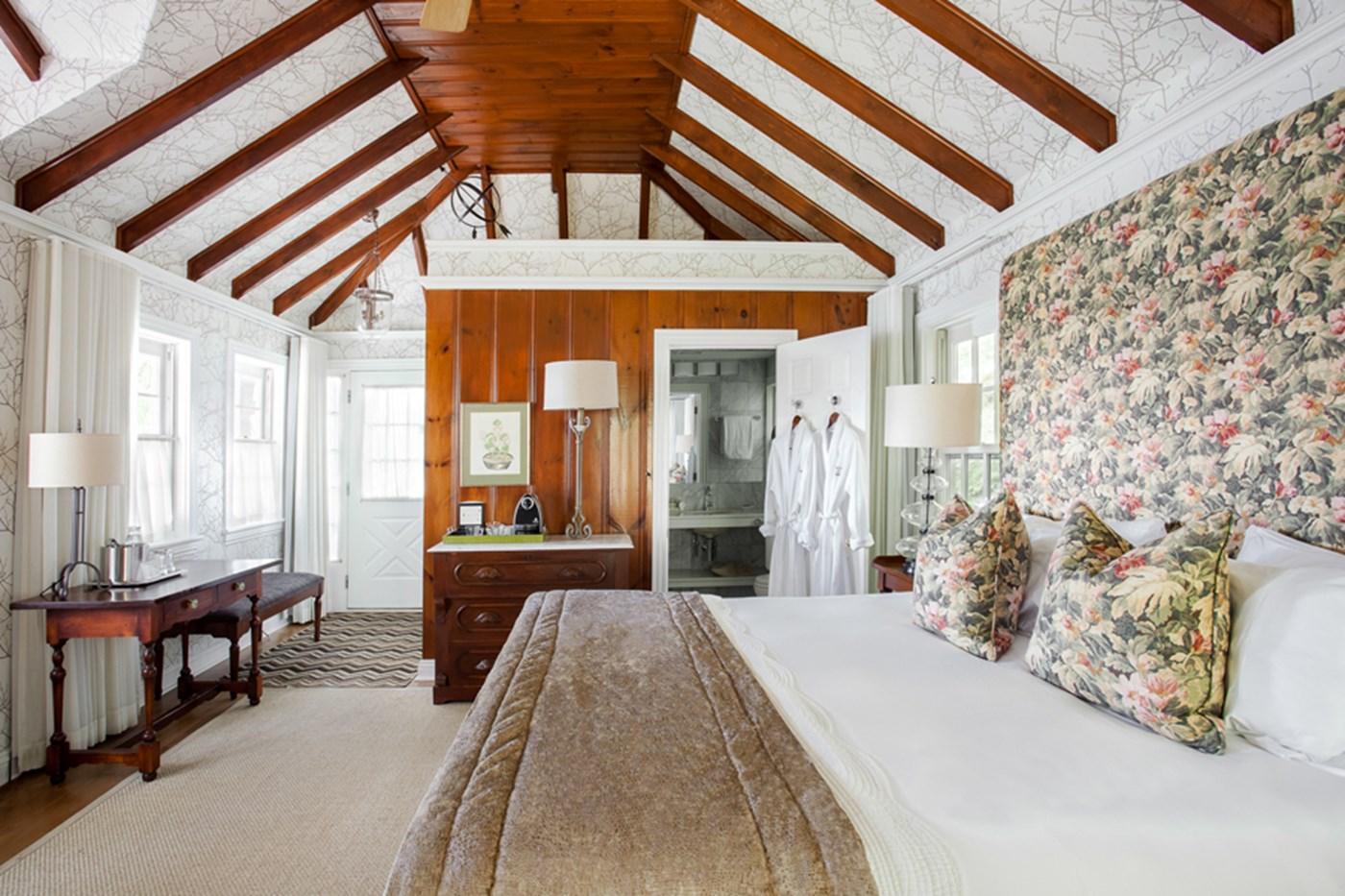 The spacious and beautifully appointed Deluxe rooms have upgrades like a Queen or King-size bed, most feature a private balcony or patio, panoramic vi... 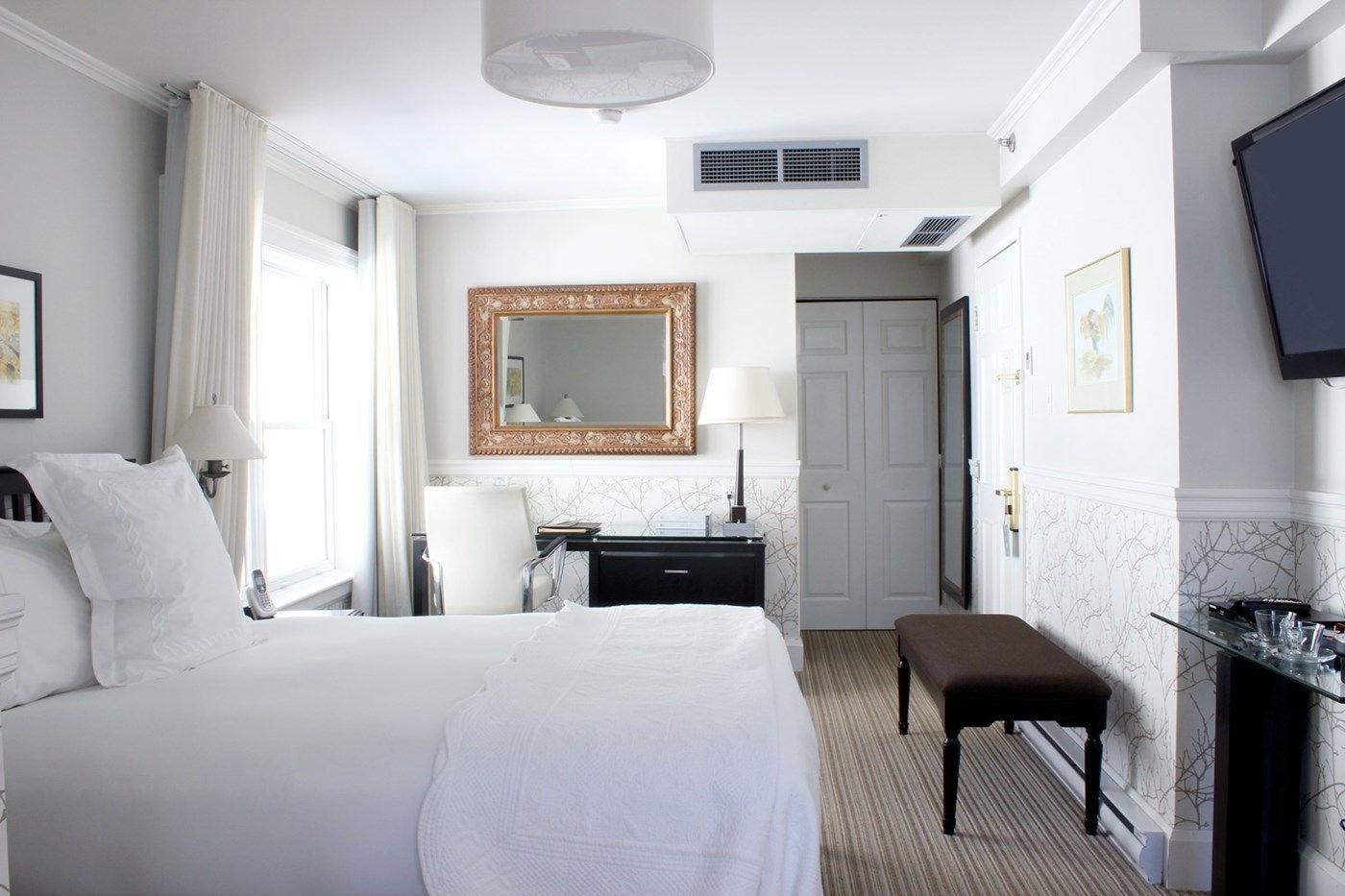 Beautifully quaint rooms offering one queen bed with views on the woods. Full private bathroom with many amenities. Features: This room is appointed i... 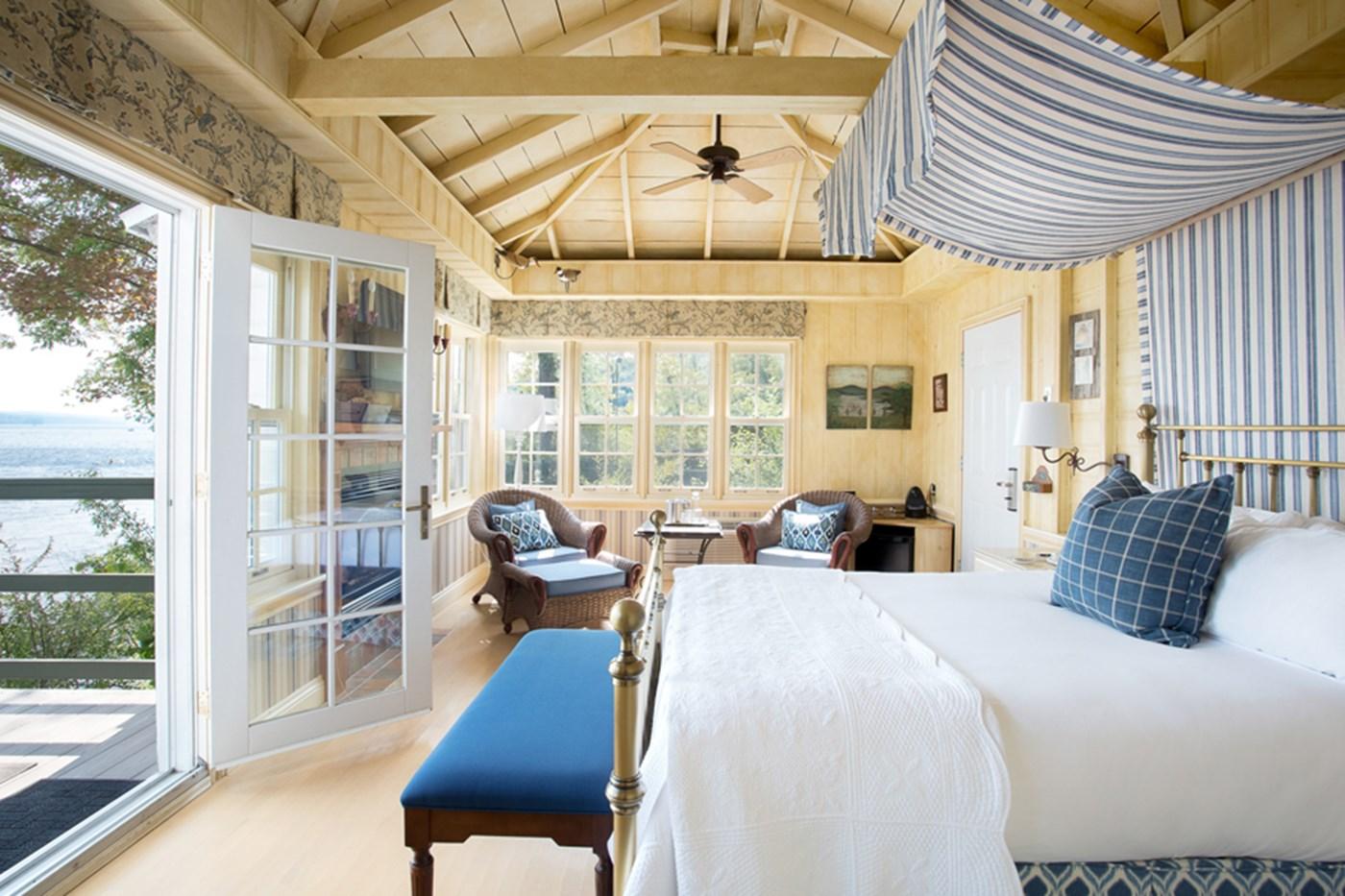 A cottage on the water! Exceptionally romantic and secluded suite by the lake, ideal for daydreaming and lazing around! Features: Queen bed, Private b... 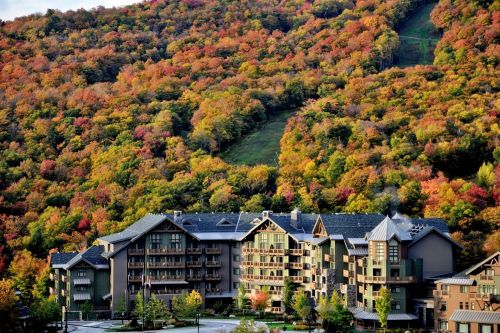 THE LODGE AT SPRUCE PEAK

The Lodge at Spruce Peak is truly a resort for all four seasons. Located in the heart of the new Spruce Peak at Stowe alpine village, and adjacent to...

EXPLORE THIS HOTEL
From 233 USD 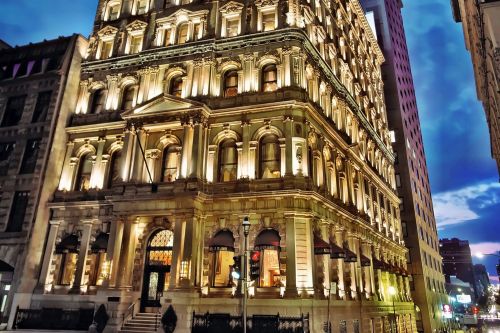 A Legendary Landmark Hotel - Hotel Le St-James welcomes you to a landmark of history and tradition in the heart of Old Montréal. A traditional Europea...

EXPLORE THIS HOTEL
From 117 USD 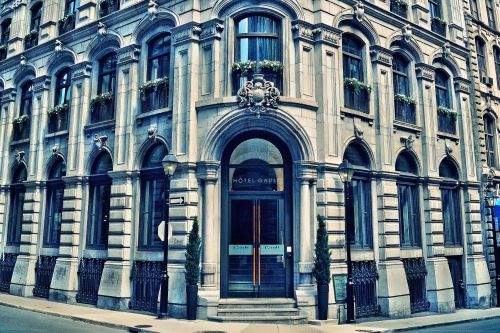