Viewing the inner courtyard - the Superior Room is a quiet and peaceful place to relax from all the adventures experienced in the Austrian capital. Bo...

The views are dominated by historic buildings; the mood is modern, timeless and elegant. Interconnecting rooms allow for time with the whole family an...

Even the "Rooms Comfort Menu" reads like a small wish list. Be it bathrobes, towels or the selection of pillows - you are surrounded by luxury, style...

Wherever you look - you have the chance to see buildings designed by Theophil Hansen. Sit back and relax in your elegant living area and treat yoursel...

Each suite is unique. The interior reflects a modern spirit of the time and a classic mindset. You will fall in love with the many details. Room Featu...

The elegant interior newly defines the history of art and culture. Even without stepping outside your door, you will experience everything that makes...

Vienna is a modern city, in which the charm of the emperors and kings is omnipresent. Feel like a royal - but today, with everything you can expect in...

This luxury suite reflects the classical Vienna of music, fashion and art as well as the modern and stylish Vienna. You can expect luxury down to the...


The Palais Hansen Kempinski was initially constructed in 1873 for the Vienna World Exhibition as a hotel and continues to "wow" guests. It combines classic architecture, cutting-edge design, and up-to-date amenities.

This luxury boutique hotel is smack in Vienna's bustling city center. However, it is only a few blocks from the famous Ring Boulevard. About a 10-minute walk from the historical center, the hotel sits in the 1st District (Innere Stadt) on a calmer section of Ringstrasse. Moreover, nearby attractions include the Freud Museum and the Danube Canal. These are both within a two-minute walking distance. The St. Stephen Cathedral is a 15 minutes walk away.

Additionally, a few pubs and cafes are scattered throughout the neighborhood. There are also tram and bus stops just outside the hotel. In addition, a U-Bahn metro station is only a few blocks away, making it easy to navigate the city.

For a five-story structure amid one of the world's most significant architectural treasure homes, the Palais Hansen Kempinski Vienna makes perfect sense. The lobby area is spacious and sophisticated. Glass elevators connect to the guest rooms and suites.

Furthermore, the property splits into two distinct zones - one for events and the other for food and beverage, by a series of evocative archways. The result is a contemporary interpretation of the majesty of ancient Europe.

Theophil Edvard Hansen, the architect behind Parliament and the historic Stock Building, inspired the heritage-listed Palais. It was built in the late 1800s. High ceilings, ancient columns, and wrought-iron stair banisters remind the building's 19th-century history. However, the interiors now have glass atriums and modern artworks.

A grand piano is at the heart of the lobby lounge beyond the front desk. There is also velvet-upholstered furniture and polished marble floors. Moreover, fresh flowers surround a stunning upside-down glass and gold chandelier.

Palais Hansen Kempinski is one of the most luxurious hotels in the world. Kempinski, The Spa in the Ottoman style, workout area, hydro pool, meeting rooms, and a ballroom, are all included in this historic palace's amenities. Moreover, simple hues, luxurious textiles, and a mix of traditional and contemporary Viennese design features create the ambiance in the hotel's rooms and suites.

Additionally, the exquisite bathrooms have elegant marble décor. They also have charming touches that serve as a reminder of a bygone era. Having a "Verlängerter," or coffee on hand as you take in the sights of Vienna or the city's famous Ringstrasse, is a good idea. Furthermore, the iPad entertainment system with Wi-Fi is a state-of-the-art feature in all rooms and suites.

Guests can also order room service, control the air conditioning and TV, and learn about spa treatments. Of course, there are also recreational activities and so much more.

This luxury hotel offers 152 guest rooms. Large and spacious suites (Junior to President) and Superior and Deluxe rooms are available. Amenities include king-sized beds, Nespresso machines, high-tech room controls, and iPads. Aside from the lesser size, a Superior room is identical to the Ring Suite but for a view of Schottenring.

Moreover, depending on the style of the area, the decor might range from subdued and masculine to bright and cheery, with a mix of woods and reds. Images of dancers are also on the walls. Additionally, bathtubs and magnificent monsoon showers are standard features in marble bathrooms.

There is also a complimentary pastry and fruit dish upon arrival. Even more impressive is the Presidential Suite, a 400-meter-square space that includes a variety of suites and its steam room.

A unique ambiance greets guests at the Palais Hansen Kempinski Vienna's restaurants and bars. A great deal of creative energy accompanies this.

The five-star-superior hotel's two restaurants - Die Küche Wien and Edvard - demonstrate excellent culinary prowess. Although the two restaurants are pretty distinct in design and atmosphere, they have a common goal. That is, world-class food prepared by Chef Philip Vogel. Die Küche, the building's younger, funkier twin, has a glass atrium and a beautiful vertical garden. Edvard is just a tiny Michelin-starred restaurant off to the side.

One Michelin star and 16 Gault Millau points later, Edvard is the ideal spot for those who love fine dining without the extras. Instead, enjoy fish fillets in buttery potato purée that melts in your mouth. Adorned with salad leaves and caviar or Wiener Schnitzel, this is among the restaurant's Austrian-inspired Mediterranean menu dishes. However, it's best to start with the shared beginning of steak tartare. Served at your table and blended to your liking with various condiments and garnishes available.

Breakfast is also a true treat at Palais Hansen Kempinski. Enjoy a luxurious spread that includes everything from a full continental buffet to omelets, pancakes, and waffles made to order. There is also a hot buffet and a champagne bar with local bubbly and Mot available for guests to help themselves to. Besides, try Botswana if you're in the mood for a fancy drink. This is served in a teacup at the chic destination bar 26°EAST in the evening.

Additionally, the Kempinski lobby lounge, lobby bar, and cigar lounge are more elegant areas to remain than the hotel's standard lobby area. Some favorites are the sophisticated Viennese Afternoon Tea or the correctly made drink. So whether you're looking for traditional Austrian cuisine or something more modern, you'll find it here.

At Kempinski The Spa, guests are transported to exotic locales across the globe. Moreover, the colors of the Ottoman Empire are in the design, influenced by the four seasons of Europe. At over 9,000 square feet, the Spa area and fitness center are significant but not imposing. There are six treatment rooms and many Ottoman-style saunas and steam rooms. Furthermore, Elemental Herbology and Daniele de Winter make the products.

The ornate building was the work of famous Danish architect Theophil Hansen. Hansen created the monolith building for the 1873 World Expo. However, the local police department took it over and operated as a station until the mid-1990s, when they demolished and replaced it with a new structure. A luxurious hotel emerged from it in 2012 after a significant renovation. The hotel received the European Hospitality Award for Best Use of Technology a year after its debut. There is no better place to book a reservation than Palais Hansen Kempinski. 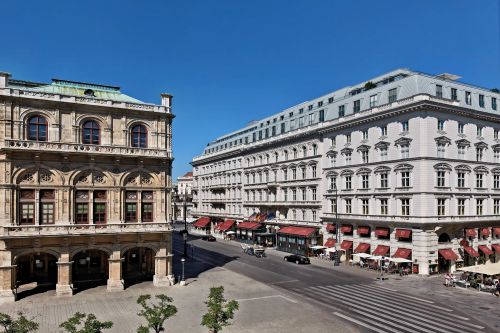 The Hotel Sacher Wien in Vienna is one of the grandest and most famous hotels globally, with a reputation that has survived many generations. Initiall...

EXPLORE THIS HOTEL
From 765 USD 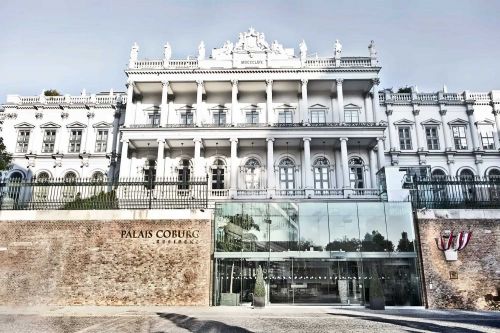 The perfect mix of luxury, style, and modern living, Palais Coburg is a luxury hotel in Vienna that offers the best vacation experience. Built by Prin...

EXPLORE THIS HOTEL
From 282 USD 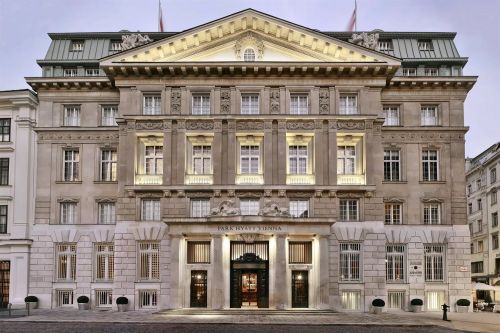 The Park Hyatt is a luxury hotel in the heart of Austria's historical city Vienna. This striking facility is the dream abode for your visit to the are...